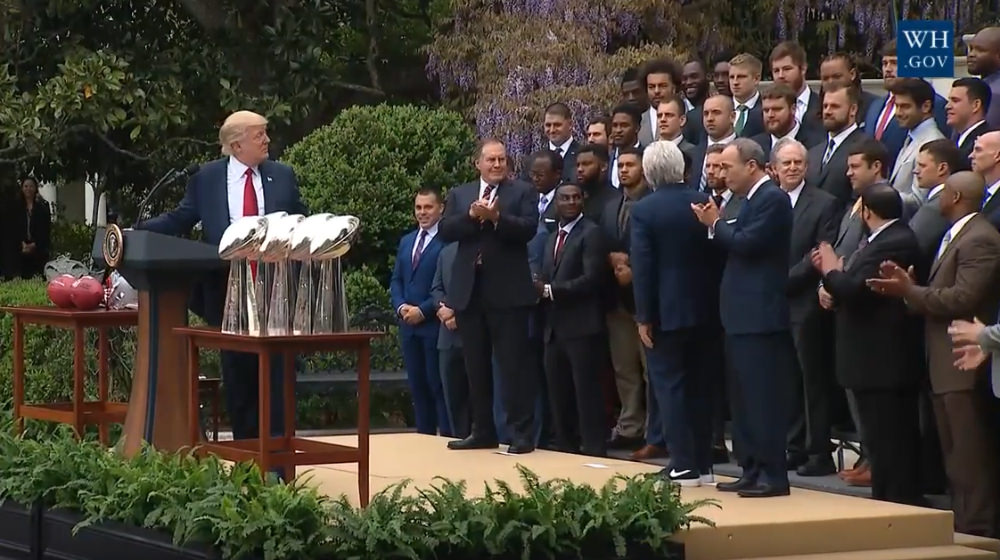 President Trump welcomed the NFL’s champion, New England Patriots, to the White House on Wednesday where he praised the team’s efforts and the hard work they put into their successful season.

President Trump, Coach Bill Belichick and owner Robert Kraft all spoke. Here’s what the President had to say about the Patriot’s historic run:

This Super Bowl was a complete team effort. That’s the beauty of what they do. They win as a team.

The big sack by Trey Flowers. Big sack. Where’s Trey? Come on, put your hand up, Trey. See, he’s shy a little bit. You weren’t shy when you hit that guy, were you? You weren’t shy about … he didn’t mind hitting. Thank you, Trey. Great job.

The incredible catch by Julian Edelman. What a catch. We all said, ‘No, that ball was dropped.’ Isn’t it good? You know, in the old days they might’ve said that was dropped. Those replays are good. You’re starting to like the replays. [Laughs] Great going, Julian.

I think of guys like Marcus Cannon and the offensive line. Marcus. … That’s some line.

Or Matt Slater, who was awarded the 2017 Bart Star Award for the character and leadership he has shown both on and off the field.

Or Nate Ebner, who played on our Olympic rugby team last summer. Pretty good athlete, right? And in Brazil, he was in Brazil, playing and doing really well and is All-Pro special team guy and player. So, Nate, congratulations. Where’s Nate? Which is a tougher sport, football or rugby? [Inaudible response.] I had a feeling you might say that.

But everyone played a role. And everybody played as champions. It was the first overtime game in Super Bowl history. And it ended with a legendary victory for this proud franchise and for these absolutely terrific players and coaches.