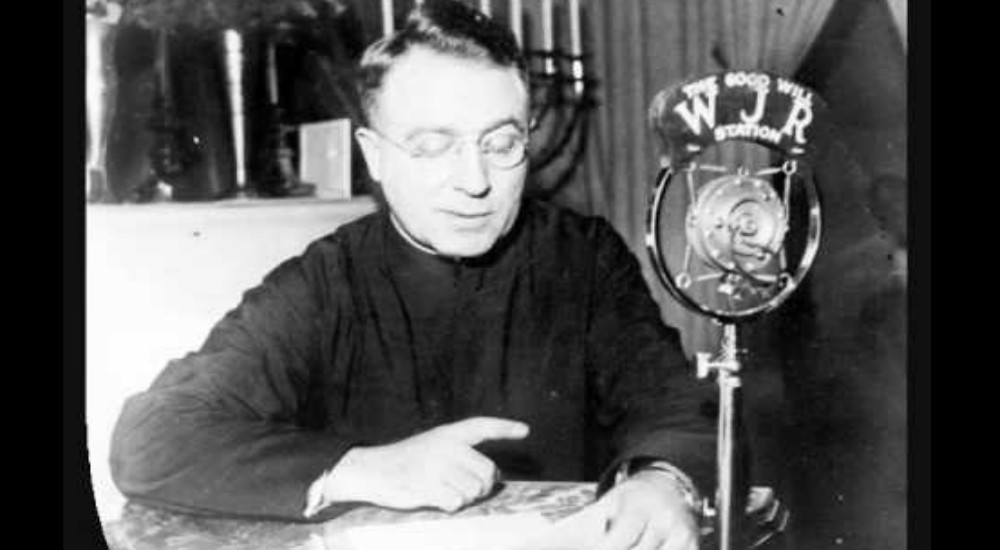 Fake News wasn’t birthed with liberal antagonisms against President Trump.  Indeed, from the 1930s until decades after his death, Fake News has had a heyday with Father Coughlin!

And for the very same reasons!

One way of stating it, yes, absolutely, “anti-New Deal venom” is also what President Trump beautifully demonstrated and proclaimed during his State of the Union speech and at the excitedly popular El Paso, Texas, “Build the Wall” rally.

Both President Trump and Father Coughlin have been accused by Marxist liberals as wrongly supporting an “Isolationist America,” when in truth both rigorously and rightfully advocated a “Protectionist America.”

President Trump declared “America will never be a socialist country!”  This was a bold proclamation against FDR’s, Obama’s and all future New Deals!  But Father Coughlin repeated it a thousand times to 40 million radio listeners and is still maligned for it as you read this!

Wikipedia is one of the worst offenders. What America needs is not a Wikipedia but an Ameripedia.  Wikipedia liberal content is highly associative with Wiccapedia and Wickedpedia.

Fake News from the 1930s till today lies and wrongly labels Father Coughlin “anti-semitic.”  Father Coughlin finally cleared up these allegations (equal to Trump’s “colluding with the Russians”) in a book entitled, Not Anti-Semitic but Anti-Communist.

Indeed, hundreds of notable American Jews went on record in Coughlin’s Social Justice Weeklies (1936-1942) stating themselves solid supporters of Father Coughlin and that “The American Jewish Congress” – which was Marxist with an American-sounding name – “does not speak for us!”  (This was before “social justice” was hijacked by liberal propagandists to gain the “moral high ground” following World War II.)

But President Trump is in a more ideal situation with his Jewish son-in-law, Jared Kushner and converted-spouse Ivanka.  So President Trump cannot be falsely accused of being anti-semitic as Father Charles Coughlin!  Though, in truth, supporters even blessed Coughlin from pre-1948 Jerusalem!

If New Deal war-profiteer and Federal Reserve cronie Bernard Baruch were alive today, he’d be stoking the propaganda fires at Trump as much as he did Coughlin!

The list could go on.  But let us stop the article here by saying that while President Trump is putting together eclectic nationalist safeguards for the future, Vigileaks strongly encourages these safeguards include education and history, lest President Trump one days finds himself endlessly and wrongly maligned, for decades, as was one of America’s Greatest Patriots, Father Charles Coughlin.