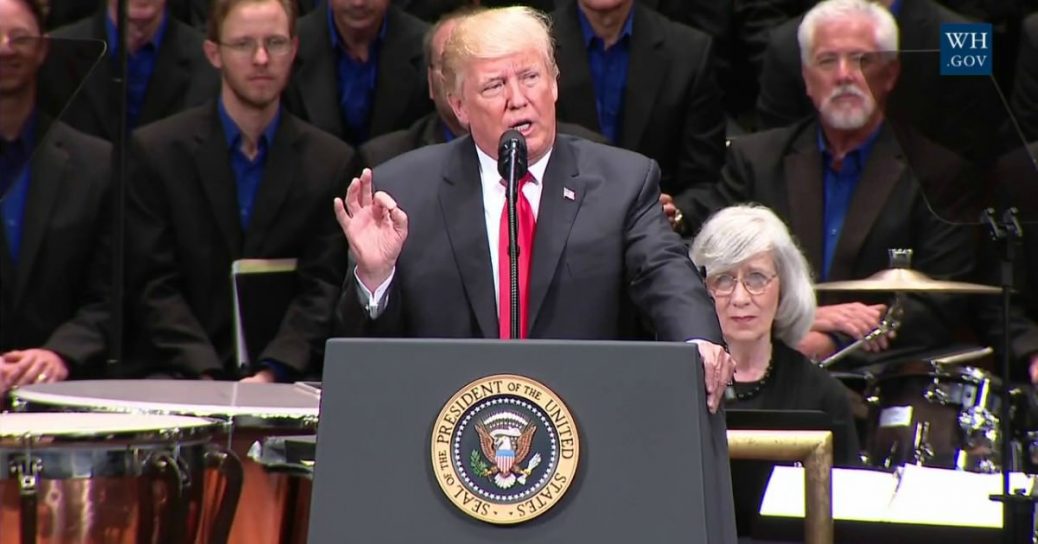 President Trump had some very hard words for the “fake news” media on Saturday evening when he spoke at the Celebrate Freedom Rally at First Baptist Church in Dallas, Texas.

“The fake media is trying to silence us, but we will not let them. Because the people know the truth. The fake media tried to stop us from going to the White House, but I’m president and they are not. We won and they lost. The press has destroyed themselves because they went too far.

Instead of being subtle and smart, they used a hatchet. And the people saw it right from the beginning. The dishonest media will never keep us from accomplishing our objectives on behalf our great American people. It will never happen. Their agenda is not your agenda.”

He also promised attendees that we would indeed be building that border wall. Saying:

“We cannot allow this terrorism and extremism to spread in our country or to find sanctuary on our shores or in our cities. We want to make sure that anyone who seeks to join our country shares our values and has the capacity to love our people.

Together we will protect our families, our nation, and our borders. And, yes, by the way, for those that are curious, we will build the wall. Okay?

Because we understand that a country is more than just its geography. a nation is the sum of its citizens, their hopes, their dreams, their aspirations. America is a land rich with history, traditions, and values. And as we have seen tonight, what a group this is tonight, America is also a land rich with heroes. And though we have many stories, we all share one home and one glorious destiny, a destiny that’s getting better and better every single day. And whether we are black or brown or white, and you have heard me say this before, we all bleed the same red blood.”

.@POTUS: "For those that are curious, we will build the wall." #CelebrateFreedom pic.twitter.com/0qeVSIi0hR

The President also honored our military heroes at the event:

.@POTUS: "You have shed your blood, poured your love, & bared your soul, in defense of our country, our people, & our great American flag." pic.twitter.com/oZiGBP5HEa

You can see his speech below: