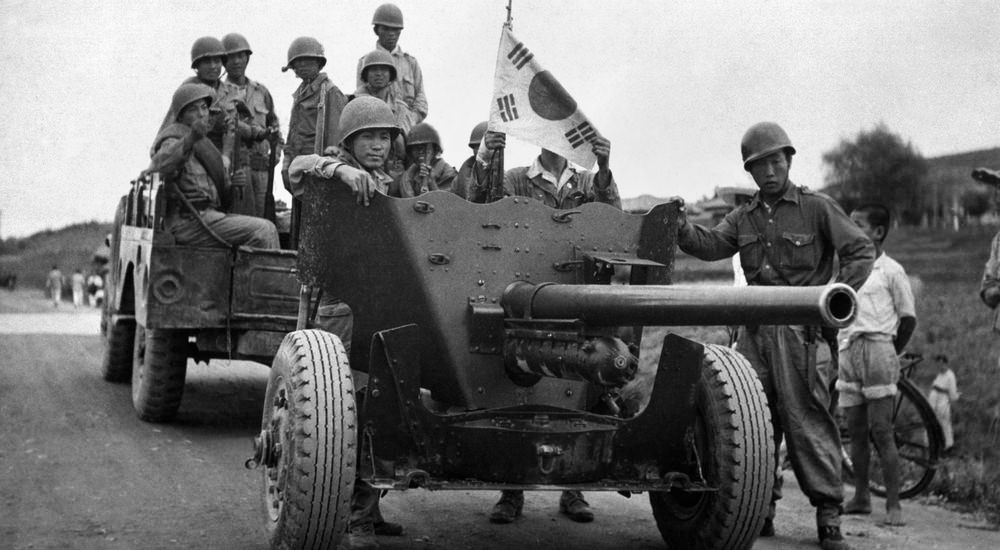 Dean Acheson, Felix Frankfurter, Anna Rosenberg, Herbert Lehman, the remains of the old Alger Hiss crew still in the State Department, were the ones who ran the first Korean War. Who will run the upcoming Korean War? Who remain as advisory traitors to President Trump? Will President Trump learn from history?

So observed a widely-acclaimed American Patriot, Gerald L.K. Smith, whose original signed manuscript revealing the secrets of the Korean War is owned by Vigileaks. Smith revealed:

“Included among the ominous personalities who were playing it cozy with the Lehman cabal and the Moscow strategists were John Stewart Service, Owen Lattimore, and Phillip C. Jessup. These enigmatic left wing forces were so entrenched that they had infiltrated the United States Armed Forces.”

“The consequences of this witch brew cabal would require a thick book to describe, but a short cut to its description can be summed up in the fact that the Patriot Chiang Kai-shek was betrayed, double-crossed and dumped, thus permitting the Moscow-directed force of barbaric Chinese Reds to move down from the north and seize the entire mainland of China. Chiang could have won if he had been loyally supported by the Americans, but he was disarmed under orders from General George Marshall, who not only did it, but boasted about it when he said, ‘With one stroke of the pen I disarmed 39 divisions of the Chiang Kai-shek army.'”

Is this not reminiscent of Hillary Clinton’s boast of the overthrow of Qadaffi? The de-stabilization and de-nationalization of nationalist China led to today’s Communist Chinese internationalism, slated by globalists to be given the western fourth of America!

Smith continues, “Supplies intended for Chiang Kai-shek from the United States were dumped into the sea under military orders from military superiors acting under orders from Washington, D.C. Chiang Kai-shek and his wife Madame Chiang Kai-shek led less than two million refugees as they fled from a land sold out to their enemies by those who posed as their allies. They settled on the Isle of Formosa where they have been virtually held like prisoners — free to develop the island, but virtually forbidden by our Government to retake the homeland.”

Smith reveals, “On numerous occasions Chiang Kai-shek and his brilliant army could have re-invaded the homeland if they had had the encouragement of the Washington Administration, which down through the years has pandered to Moscow and Peiping. It is the scandal and the super-scandal of the century. In the history of western civilization, traitors have been shot for doing less than one-tenth as much as has been done by people of high authority in the Washington government who have been able to issue final orders to men great and intelligent including General MacArthur.”

Are those in Washington and the US military who would betray President Trump, in the upcoming Korean War, aware of this penalty?

Smith emphasizes, “Facts began to come out revealing what some of us had suspicioned right along was satanically correct; Roosevelt and his cabal had virtually agreed to split the Orient right down the middle in favor of Moscow. A rising understanding of the Roosevelt-Truman-Eisenhower fraud just could not absorb as much treason as had been promoted by the manipulators inside the State Department and elsewhere. It was the plan of the manipulators to turn Korea over to the Reds, but there were too many people in positions of influence to permit this. The Korean engagement was undertaken as a United Nations project. The manipulators assumed that in giving the pro-appeasement, pro-Soviet United Nations a sabotaging authority there would be little doubt about the outcome.”

President Trump! Who today are “the manipulators inside the State Department and elsewhere?”

“The practical responsibility for carrying on the fight made it, in fact, an American war with American boys doing most of the fighting along with native South Koreans who were led by that great patriot Syngman Rhee, due later to be liquidated by the same gang which liquidated General Macarthur.

“The pal of Alger Hiss, Dean Acheson, then Secretary of State, under the influence of Felix Frankfurter, issued a statement virtually assuring the Communists that they need have nothing to fear above the 38th parallel. This, in effect, committed the US officially to the theory that the Reds could have the north half of Korea if they wouldn’t come further south than the 38th parallel. It was the only instance in American history when representatives of the U.S. Government virtually surrendered before the war started.

“With UN and pro-Soviet personalities right on the inside of our military strategy, General Douglas MacArthur was asked to win the war in Korea. He devised the military strategy which indeed was a winning strategy. Later four Generals and an Admiral were to testify before the Internal Security Committee of the U.S. Senate to the effect that but for the orders coming out of Washington, an overwhelming victory could have been experienced in Korea.

“General Douglas MacArthur grew up in a school where treason was called by its right name. He did not know how to plan a battle action without planning for victory. The General’s formula for victors in Korea was not popular among the inside conspiratorial gang which was campaigning for appeasement and defeat.”

President Trump! Who is the inside conspiratorial gang campaigning for defeat! Ferret them and their military shills out before your action against North Korea!

And beware the Assistant Secretary of Defense! “Truman named the leftwing Marxist, Anna Rosenberg, as Assistant Secretary of Defense. Her radical movements were recorded in the reports of the House Committee on Un-American Activities. Influencing the Communist outcome of the first Korean War, her office gave a position of unimpeachable power in the headquarters of the Government of the United States. In fact. more powerful, in some respects, than the President of the United States himself – Harry Truman. Imagine a great general, a military scientist, a scholar and a strategist – imagine the most famous military genius if the century, General Douglas MacArthur, subject to the will of a left wing Hungarian Marxist…”

President Trump! The greatest President of all time will have the greatest sagacity of all time! Become the Greatest American President by vindicating America’s beloved General Douglas MacArthur!

From what is General MacArthur being vindicated? “General MacArthur was fired because he refused to purposely lose a war. Imagine the situation. Military supplies and troops were coming into Korea from across the Yalu River. They were being supplied by ammunition bases behind the Red Chinese lines. General MacArthur was ordered not to bomb these supply lines and supply bases. In other words, let the Red Chinese soldiers and their supplies (including Rockefeller’s Standard Oil drums) come to the Communists. Make no effort to cut off these supplies. Make no effort to cut off this march of Bolsheviks from beyond the Yalu River. Merely send our boys up to the front line and permit them to be shot, destroyed, and captured by the Reds whose supplies and whose resources were being protected by executive orders coming out of the White House and the Pentagon.

“This was too much for MacArthur, and the pressure of the Lehman-Rosenberg machine, acting through their little puppet in the White House, Harry Truman, this great, great man, General MacArthur, was held up to scorn and abuse and removed from his Korean command. Only the reaction of American public sentiment prevent him from being stripped of his decorations and imprisoned…”

Today, over North Korea, let all true USAF pilots say, “This one’s for you, Mac.”