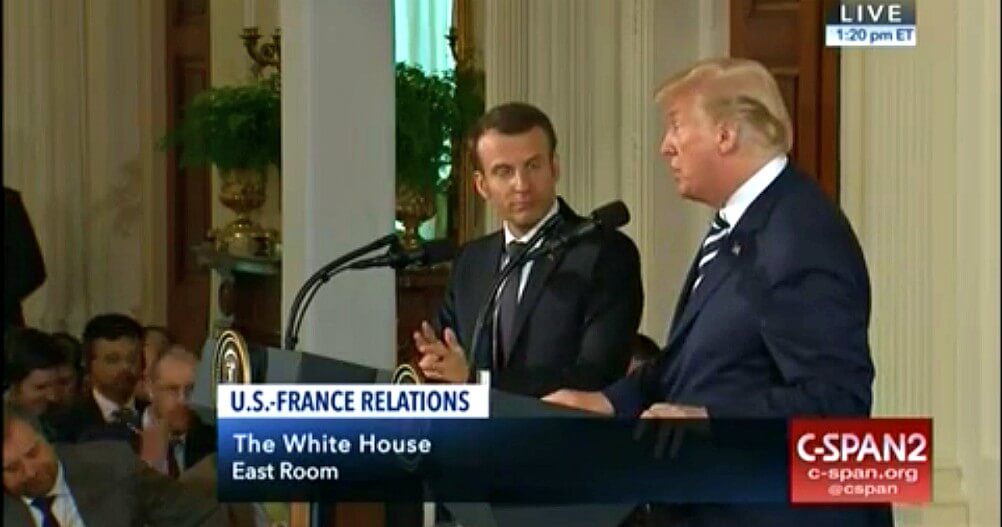 President Trump has been spending time with French President, Emmanuel Macron this week and on Tuesday they held a joint press conference to explain some of what they have been discussing.

Macron made it clear that he was hoping that the President would keep the USA involved in the Iran Deal, but also that he was pushing to see the deal expanded to include the ongoing turmoil in Syria.

President Trump seemed open to these things, but he had a very important and specific message for the leaders of Iran…

If they weren’t careful they could end up paying a price that “few countries have ever paid.”

Hard words from a serious man.

Here’s what he said:

And when we want to rebuild our infrastructure, everyone says we want to be careful with our money.

When we want to fix a highway or build schools and lots of other things, tunnels and bridges, they say no, let’s be careful with our money.

And yet we have spent $7 trillion in the Middle East, and we have got nothing for it. Nothing. Less than nothing as far as I’m concerned. That is over an 18 year period.

The United States will not continue to pay, and [the Gulf States] will also put soldiers on the ground, which they are not doing. We will, in fact, bring lots of people home, and we will have a strong blockage to the Mediterranean, which to me is very important. Because if we don’t you have Iran going right to the Mediterranean and we will not have that.

There is a chance, and no one knows what I am going to do on the 12th, although you, Mr. President, have a good idea, but we’ll see. We shall see.

We will see what happens on the 12th.

I will say, if Iran threatens us in any way they will pay a price like few countries have ever paid. Okay.