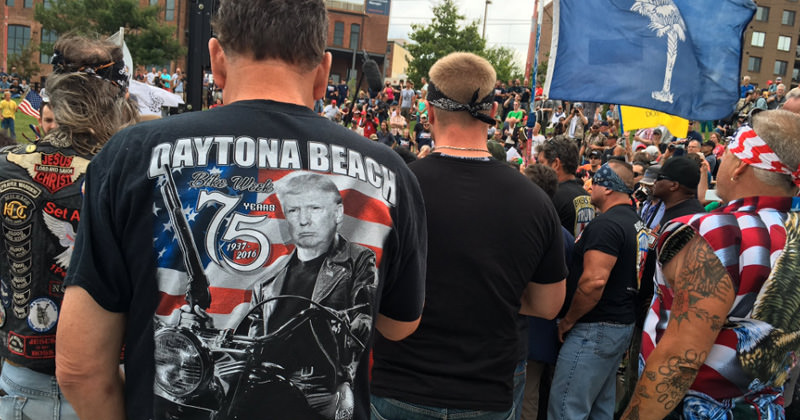 BUT WHERE ARE THEY? AMERICA’S TRUE AND PROVEN MILITIA!

During the Presidential election, it was easy to see why the DNP and globalists diligently worked, through the years, to demoralize and destroy America’s Veterans of the Armed Forces!

Easily understood, the globalists wanted America’s veterans to be crippled to the point of suicide, to be in physical pain to the point of despair, to be weakened and pathetic nationalist symbols, while globalists infiltrated the armed forces with Marxist Unitarian “Church” promoted paganism.

Suddenly from this socially-engineered morass and quagmire, the toughest Biker Vets rose up! Like the toughest black men and women who survived the slave ships, the Biker Vets displayed their indomitable human spirit of America and came alive!

It called to mind the scene in Mel Gibson’s The Patriot where his son, in the swamp, whispered, “Father, we don’t need these kind of men.” To which the Patriot replied, “Son, these are exactly the kind of men we need!”

No, foreign UN troops were not allowed to “guard” the November 2016 Presidential election. And no other globalist agency was going to interfere. America’s Hidden Heroes, the Biker Vets – often black-listed from other jobs just for being veterans – made sure the elections were honest!

Indeed, a symbolic and initial gesture of gratitude occurred when President Trump, in his first glorious speech to Congress, acknowledged his assistance of Harley Davidson and their parking five new Harleys on his Presidential lawn!  Indeed, Harley are more resilient than the globalist LENCO Bearcats, in every county, pre-positioned for an American takeover!

Truly, there is no such thing as a Sharia “No Go” zone to Biker Vets! In 1957, America had one mosque. And now there are 5500 and increasing! As in Sweden, around these grow the anti-Constitutional and anti-American “No Go” zones.  America’s war vets didn’t fight valiantly to be overrun by Muslim “No Go” zones in America.

Where are the hundreds of thousands of Bikers For Trump today? Our noble Vikings of the 21st century? President Trump and America needs them! They were on the globalist extermination list for an eventual UN foreign-troop and Sharia takeover (while National Guard are sent overseas by globalists to guard “Poppy” Bush’s opium crop). Do they realize the battles have only just begun?

While America needs to pray for them – so they become great Christian warriors like Constantine and the muscular Charlemagne – be it known in November they already proved themselves as Heroic Warriors! They need America and America needs them! Let’s let them know we Appreciate them!