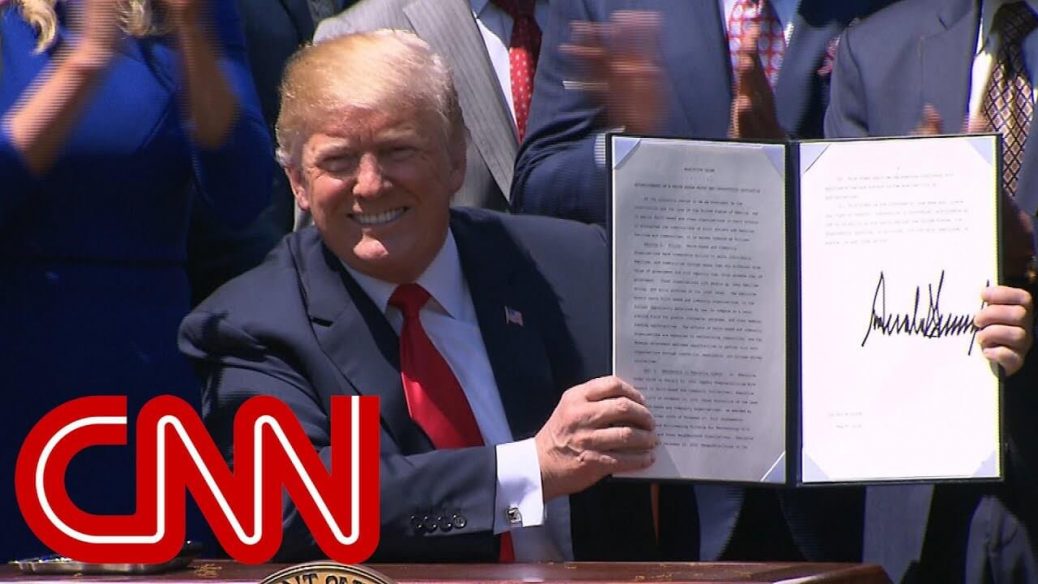 Today is the National Day of Prayer, and the White House took time out of their day today to observe the important American tradition.

The White House celebrated with a Rose Garden ceremony, and President Trump gave a short speech before signing the 2018 National Day of Prayer proclamation.

BY THE PRESIDENT OF THE UNITED STATES OF AMERICA

On this National Day of Prayer, we join together to offer gratitude for our many blessings and to acknowledge our need for divine wisdom, guidance, and protection.  Prayer, by which we affirm our dependence on God, has long been fundamental to our pursuit of freedom, peace, unity, and prosperity.  Prayer sustains us and brings us comfort, hope, peace, and strength.  Therefore, we must cherish our spiritual foundation and uphold our legacy of faith.

Prayer has been a source of guidance, strength, and wisdom since the founding of our Republic.  When the Continental Congress gathered in Philadelphia to contemplate freedom from Great Britain, the delegates prayed daily for guidance.  Their efforts produced the Declaration of Independence and its enumeration of the self-evident truths that we all cherish today.  We believe that all men and women are created equal and endowed by their Creator with certain inalienable rights, including life, liberty, and the pursuit of happiness.  Prayer sustained us and gave us the strength to endure the sacrifices and suffering of the American Revolution and to temper the triumph of victory with humility and gratitude.  Notably, as one of its first acts, our newly formed Congress appointed chaplains of the House of Representatives and Senate so that all proceedings would begin with prayer.

As a Nation, we have continued to seek God in prayer, including in times of conflict and darkness.  At the height of World War II, President Franklin D. Roosevelt called for prayer “for the vision to see our way clearly ‑‑ to see the way that leads to a better life for ourselves and for all our fellow men ‑‑ and to the achievement of His will to peace on earth.”  Decades later, following one of the darkest days in our Nation’s history, President George W. Bush offered this prayer for our heartbroken country, mourning the precious souls who perished in the terrorist attacks on September 11, 2001:  “We ask Almighty God to watch over our Nation, and grant us patience and resolve in all that is to come.  We pray that He will comfort and console those who now walk in sorrow.  We thank Him for each life we now must mourn, and the promise of a life to come.”

America has known peace, prosperity, war, and depression ‑‑ and prayer has sustained us through it all.  May our Nation and our people never forget the love, grace, and goodness of our Maker, and may our praise and gratitude never cease.  On this National Day of Prayer, let us come together, all according to their faiths, to thank God for His many blessings and ask for His continued guidance and strength.

In 1988, the Congress, by Public Law 100-307, as amended, called on the President to issue each year a proclamation designating the first Thursday in May as a National Day of Prayer, “on which the people of the United States may turn to God in prayer and meditation at churches, in groups, and as individuals.”

NOW, THEREFORE, I, DONALD J. TRUMP, President of the United States of America, do hereby proclaim May 3 as a National Day of Prayer.  I encourage all Americans to observe this day, reflecting on the blessings our Nation has received and the importance of prayer, with appropriate programs, ceremonies, and activities in their houses of worship, communities, and places of work, schools, and homes.

IN WITNESS WHEREOF, I have hereunto set my hand this third day of May, in the year of our Lord two thousand eighteen, and of the Independence of the United States of America the two hundred and forty-second.

Here’s full video of the event: