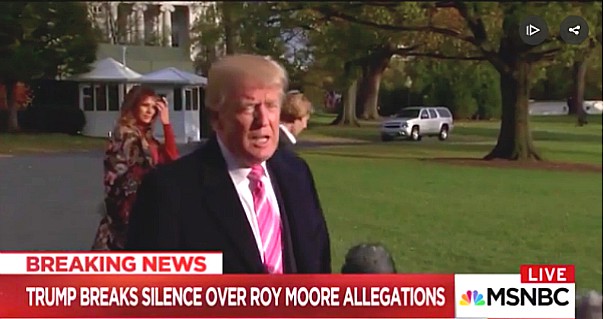 Look. President Trump is not going to be endorsing Judge Roy Moore (R-AL) in his race for the Senate seat from Alabama. It’s too risky.

However, on Tuesday, the President did the next best thing and said that Moore is preferable to a Democrat (namely, his opponent Doug Jones).

When the reporters jumped on the statement, wondering if that meant Trump was supporting an accused pedophile, the President responded by saying that Moore had completely “denied” everything.

“He totally denies it, he says it didn’t happen. And you have to believe him also,” the president said.

“I can tell you a fact, we do not need somebody who is going to be bad on crime, bad on borders, bad on the military, bad for the Second Amendment.”

When a reporter shouted out: “Is an accused child molester better than a Democrat?”

The President responded by again reminding the media that Moore was denying every charge. “Well, he denies it. Look at what is really going on, and all the things that have happened over the past 48 hours. He totally denies it, says it didn’t happen, and you have to listen to him also. He said, 40 years ago, this did not happen.”

This is honestly as good as things will get for Moore. The President can’t endorse him on the off chance that more accusations, or evidence, come out against Moore.

But after the week that Moore has endured… I think he’ll take any bit of encouragement he can get. Even if it’s just someone saying that the other guy is terrible.