Trump Shows What a President Looks Like in Response to Berlin Terror!! 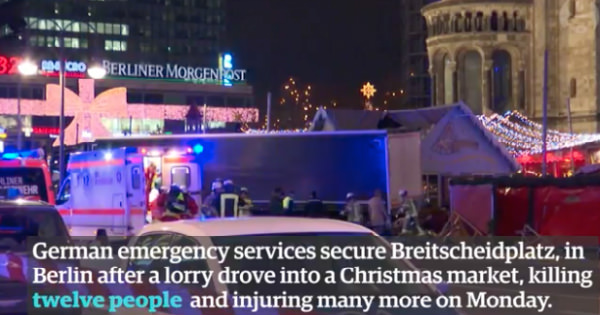 Another Muslim terrorist attack has rocked Europe as an evil villain drove a truck through a Christmas day crowd in Berlin, Germany.

12 people are confirmed dead, many more injured and Muslim terrorism is to blame.

The Berlin Christmas market truck crash is now being investigated as an act of terrorism https://t.co/yjdcLDMi2K https://t.co/kJJHqQeJbc

In fact, the killer wasn’t just a Muslim, he was a recently arrived… REFUGEE.

President-elect Donald Trump sent his condolences to the people of Germany.

Trump calls incident in Berlin "horrifying", says terror groups "must be eradicated from the face of the earth" pic.twitter.com/ru7lW71hDQ

The United States condemns in the strongest terms what appears to have been a terrorist attack on a Christmas Market in Berlin, Germany, which has killed and wounded dozens. We send our thoughts and prayers to the families and loved ones of those killed, just as we wish a speedy recovery to all of those wounded. We also extend our heartfelt condolences to the people and government of Germany. We have been in touch with German officials, and we stand ready to provide assistance as they recover from and investigate this horrific incident. Germany is one of our closest partners and strongest allies, and we stand together with Berlin in the fight against all those who target our way of life and threaten our societies.