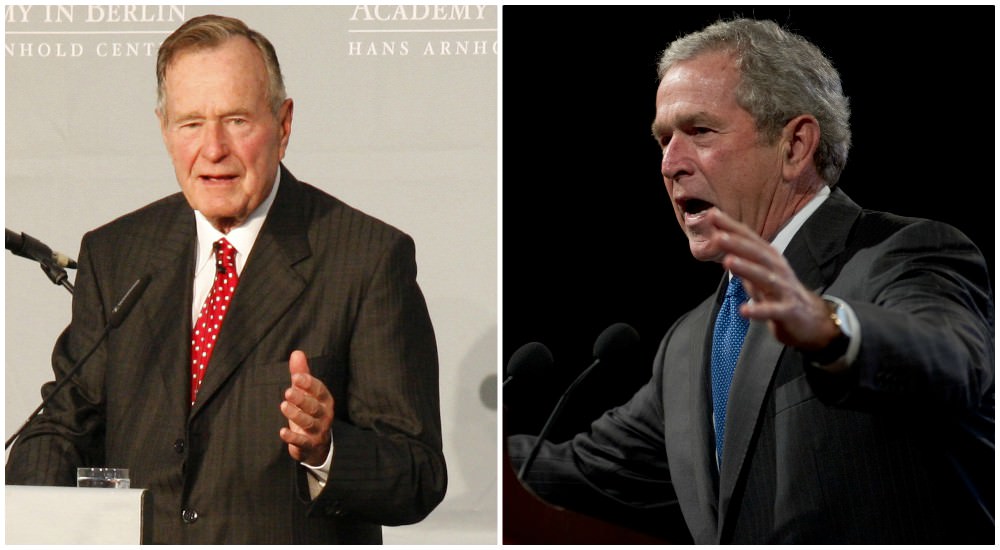 In a new book about the life and times of the 41st and 43rd Presidents, George H.W. Bush and George W. Bush, we learn some not so pleasant things about these former Presidents.

The book is titled “Last Republicans” based on the differences that the Bushes see between their GOP and the current GOP. This is ridiculous. The elder Bush was looked upon suspiciously by most of the party base because of his previous distaste for President Reagan. And the younger Bush was looked on with disdain by younger Republicans who watched as he grew the budget, expanded government and led us into perpetual war.

While both men were unfairly maligned by the media during their presidencies, neither was a good example of what Republicans should be. One lost his job after breaking a promise to never raise taxes, and the other left as one of the most unpopular Presidents ever after signing a massive bailout for our banks. Neither move was very “Republican” and neither man was ever a very good “conservative.”

Now, after refusing to criticize 8 terrible Obama years, they have crept out of the wilderness to attack President Trump? It’s unconscionable.

Here’s what historian and author of a new book about the Bushes, Mark Updergrove, had to say about their opinion of Trump.

GANGEL: He gave you a rare insight though of into his criticism of Donald Trump. What did he tell you?

UPDEGROVE: One of the things he said was, that one of the hallmarks of great leadership is humility. So when Donald Trump said, I am my own advisor. Bush thought, and this is a quote, wow this guy doesn’t know what it means to be President.

GANGEL: What was his tone when he talked to you about Trump?

GANGEL: He weighed his words?

UNDERGROVE: I think he did, yes.

GANGEL: President Bush 41, was a bit blunter. He said, that he thought that Donald Trump had quote, a certain ego and then he told you point blank?

UNDERGROVE: He’s a blowhard and he said I don’t like him, plain and simple. And I’m not excited about him being a leader was his quote. And if you look at the Bush family, it makes perfect sense. Donald Trump is everything that the Bush family is not. George Bush grew up thinking about the greater good. Donald Trump, I think is is manifestly narcissistic. It’s part of his brand and that brand is the antisepsis of the Bush brand.

UNDERGROVE: How do you think these two men feel that Donald Trump is now the standard (ph) bearer of the Republican Party?

I think it’s pretty clear if you look at their records and their views, politically, that I’m going to quote George H. W. Bush, they’re not excited about Donald Trump being our leader. That’s not a, that’s not a leap of faith that’s pretty clear. And I think the the most clear demonstration we get of that recently is Charlottesville. The Bushes came out with a join Tweet, which they had never done in the past, condemning bigotry and anti-Semitism and all the thing that were on display in Charlottesville among the white supremacist. That was a clear betrayal of American values and the Bushes came with that joint sentiment(ph). I think that spoke resoundingly about the void in leadership that they were seeing from the White House.

GANGEL: There are a lot of quotes from the Bushes that are gonna make news in this book. Bush 43 talks about whether Vice President, Dick Cheney had played an oversized role in his Presidency. Something that gets talked about all the time was–

GANGEL: –Was was Dick Cheney too powerful? And Bush 43 told you (inaudible)?

UNDERGROVE: That’s the quote. I understand his frustration because at the time, there was the perception that Dick Cheney was the acting President but infact Georg W. Bush had had a life time of making bold decisions. He has this preacher natural confidence in himself as a leader and if you talk to those around him, they have confidence in his leaders. And so this notion that Cheney was making the decisions in ludicrous.

GANGEL: When you started to write this book, let me guess, the title was not The Last Republicans?

UNDERGROVE: When I set out to write this in 2013, you know it was a very different time, but The Las Republicans became the right title during what has become the Trump era.

UNDERGROVE: Well you know George W. Bush himself said in 2016 a privately and to me you know I fear that I will be the last Republican President.

GANGEL: He confirmed that to you?

UNDERGROVE: He confirmed that to me and it wasn’t just about Hillary Clinton becoming President, it was because Donald Trump represented everything that the Bushes (ph) —

PAUL: You know part of this that I think is interesting about this too is, I will never forget Donald, President Bush 43 coming out and saying I will never say anything about or criticize the sitting President because I know what that feels like and I’m not gonna do that.

SAVIDGE: Times have changed, as has been pointed out. CNN’s special correspondent JAMIE GANGEL joins us this morning. Jaimie, a fascinating conversation there with the author. Does it surprise you to hear the Bushes weigh in as they have now?

GANGEL: So a little bit because they have as Christie just said, they’ve gone to great lengths not to criticize him publicly On the other hand, this is not a surprise, we know that neither one of them voted for them. We’ve heard these comments that they have said to other people privately. And I, And I think what’s key here is also some of the timing of these interviews. It’s coming out now but a lot of the research and the interview that Mark Undergrove did were during the campaign so in in fairness, this is not, it’s coming out now that he’s President but a lot of this was said before he was president.

PAUL: Did he talk much about their conversation regarding the election and who they voted for because that part was quite interesting for anybody, especially in their position to come out and say I didn’t vote for the Republican nominee this is who I voted for.

GANGEL: Right so we’ve heard a little bit about this before and we’ve confirmed that former President Bush 41, the father, had voted for Hillary Clinton, he did vote for Hillary Clinton. And then what his son did was, he voted for none of the above at the top of the ballots. And then he voted for Republicans down ballot. It’s still astonishing to hear it, there are the last two Republican Presidents and they did not vote for the Republican. For both of them, that was the first time so it’s it’s it is quite astonishing still.

SAVIDGE: I have to ask you you know the other stuff they were talking about which is Vice President Dick Cheney, the influence he had or did not have. The push back from from George W Bush was emphatic in fact he swore, did the author hit a nerve here?

GANGEL: Absolutely, Mark, he must have because this is not a new question that Bush 43 has gotten. He’s been asked repeatedly about it he’s written about it in his own book so it clearly Mark Undergrove a little riled up but he also says in the book that it quote, blows his mind that people think that he wasn’t the President. And — in the book and in other places we’ve seen both his mother and father say that they thought Dick Cheney may have had too much influence on him.