The Most Powerful Hurricane in History! (of the last half century) 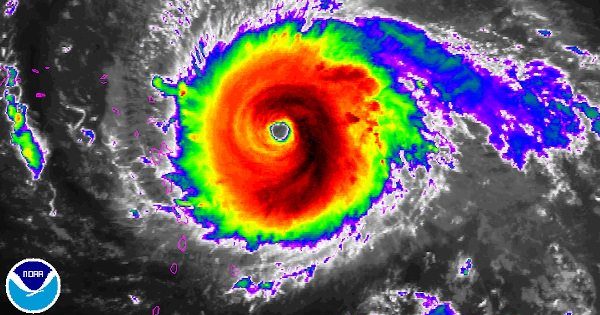 Global Warming Chicken Littles are at it again declaring that this hurricane, occurring as they always do, because it is the strongest recorded since they began making records.  Those records only go back a few decades, but that doesn’t stop them from saying it’s the most powerful in all of history!

Until the advent of weather stations, now supplemented by weather satellites, the world would never have known about the strength of hurricanes in the Atlantic.  Their strength was only measured by the wind speeds recorded by land based meteorology centers until the 1970s when America began putting satellites into space to follow the weather.  But that doesn’t stop Al Gore and his cadre of Chicken Little scientists declaring that any hurricane is the result of mankind burning fossil fuels.  The Earth has been churning out hurricanes for a billion years, and because there hasn’t been one recorded in the last fifty years with wind speeds this great, they believe they can dupe the ignorant into believing it has been caused by our cars, gas heaters, and electric air conditioners altering the climate of the planet.  Their solution is always that America reduce its energy by reducing its population and decline economically.  Al Gore was incensed when Trump pulled out of the Paris Climate Accords that Obama used to condemn America into giving away its wealth to the rest of the world.  The Left’s plans to unmake America are being foiled by education that the Left is calling “hate speech.”

While there has never been any evidence to scientifically prove that man’s pollution has anything to do with global temperatures, but that doesn’t stop these deceivers from declaring it to be a proven fact.  It doesn’t even have as much proven fact as the Theory of Evolution that liberals also believe is proven scientific fact, yet lacks any evidence to take it beyond the theoretical stage.  Al Gore & Co. shares the same lack of veracity as Al Capone’s claim he was a “businessman.”  For all of his previous predictions about powerful hurricanes ravaging America, polar ice melting, the Earth warming at exponential rates, and the ocean being a heat sink, he is still standing at zero.  Yet there are still those who insist on being duped.  The solution remains – make America into a socialist craphole with Democrats as the overlords and the world will be saved!