The Pope has Taken Another Hard Left Turn 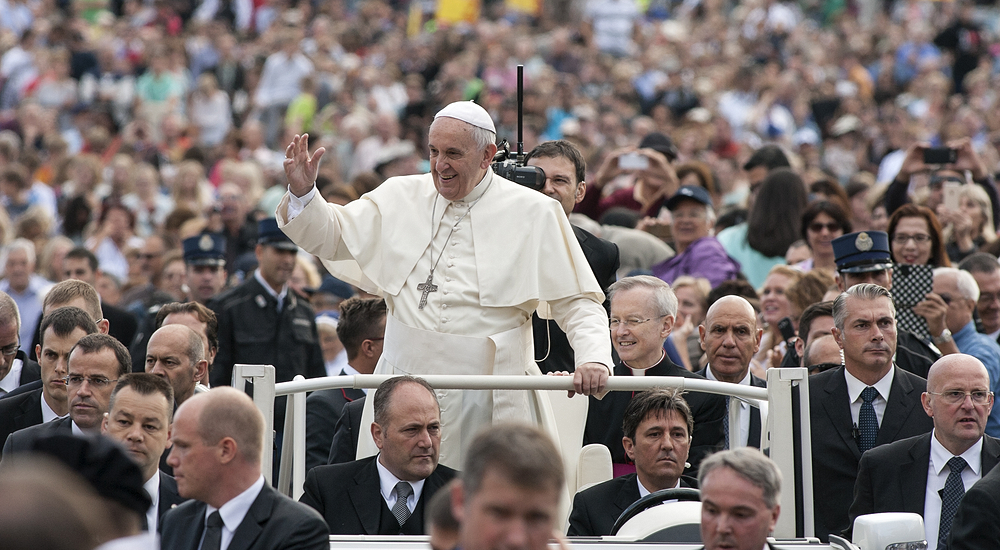 I’ve expressed my perplexity with the present Vicar of Christ in the past and it doesn’t appear I’ll be jumping on his band-wagon anytime soon.

By all accounts, Pope Francis is a good guy. Of course he’s a good guy – he’s the head of the Catholic Church – revered by millions! But, as I’ve stated before – I’m not Catholic – so to me, he’s just a man – flawed like me and you.

That being said – I have been tough on him in the past and as I am not Catholic, when he says or does something I consider to be a bit off (in my opinion), I call him on it – the way I would anyone else, or anyone might do of me.

Yet this Pope has waded into a number of hot social and political topics since being elevated and most of his opinions have taken a decidedly liberal bent – and this one is no different.

On a plane ride back to the Vatican from a trip to Poland, Pope Francis revealed his thoughts on Islamic violence. He said: “I think it is not right to identify Islam with violence. This is not right and this is not true.”

His opinion and apparent attempt to deflect echoes virtually all leftist politicians and talking heads. If I didn’t attribute the quote to the Pope, one could easily fill in the blank with almost anyone from Hillary Clinton to Obama, Nancy Pelosi, John Kerry, etc.

Very few are saying that all of Islam promotes violence, but as the man (Jay Severin of the Blaze) once said: “Not all Muslims are terrorists, but with few exceptions, so far, all the terrorists have been Muslims.”

But it wasn’t good enough to just exclaim the obvious. The Pope had to expound – and as he did, it just got worse.

“I think in nearly all religions there is always a small fundamentalist group. We have them.” Really? You have a segment of Catholicism that plans, purchases or steals weapons and makes suicide vests to blow people up in a variety of public places?

Since I know of no other, I assume he must be referring to the long ago defunct Irish Republican Army (IRA) whose goal was to separate Northern Ireland from the U.K. and create a “workers’ republic” encompassing all of Ireland. They called themselves Catholics. Other than them, I can think of no other “Catholic” segment who we would classify as terrorists. And I hardly think of them as Catholics. I don’t recall hearing about any IRA fighters shouting “God is Great” or “Let’s do it for the Catholics” when murdering a loyalist. Just calling yourself a Catholic doesn’t make you a Catholic anymore than Bruce Jenner calling himself Caitlyn and pretending to be (an ugly) woman.

And then he went completely off the rails, with the oh so predictable argument of the left – the aforementioned moral relativism claim.

I’m sorry Pope and to all Catholics, but what a stupid statement – vacant of any critical thought. Being baptized into Catholicism or any religion, particularly at birth, isn’t a shield against committing evil acts. He frankly sounds like that whack-job Rosie O’Donnell who stated that “Radical Christianity is just as threatening as radical Islam…”

Sure, people commit violent acts on one another everyday – but they don’t espouse their religion before, during or after the evil deed. This is the difference between your run-of-the-mill evil-doer and a radical Islamist who will always do so – and mean it.

Islamists are the only segment of the world’s population who murder in the name of their religion – 100 percent of the time.