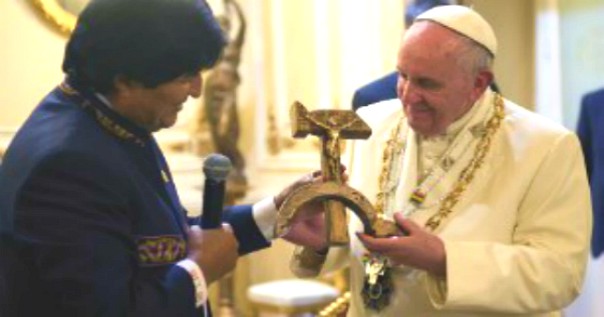 RONCO DI CASSATO, ITALY 8/5/17 — Pope Francis, our first Communist Pope not only winks at abortion, and sin in general, but gives an apostate the pulpit in the Catholic Church to espouse her views during the service, the first which took place  this past July 26th in the Church of San Defendente, Ronco di Cassato.

Emma Bonino has been given pulpit privilege by Pope Francis who publicly  stated that she was “among the great ones of Italy.” Journalist David Martin wrote in the Canada Free Press that he (the pope) acknowledged that “she thinks differently than us.”

Francis recommended patience with her adding, “You have to look at people, what they do.” Excellent suggestion. So what DOES Emma Bonino do?  Emma Bonino is an abortionist who says she is proud of the 6,000,000 (6 MIILLION) babies she has killed since 1968,  a grim-reaper task that she continues to this day. And she is welcomed by Pope Francis to speak in the Catholic churches? Something is terribly wrong with this picture..

Francis was a puzzle from the beginning. First, the future pope, Jorge Mario Berguglio, came out of nowhere. He was born and raised in a Communist country, Argentina.  We had no knowledge of him being in the College of Cardinals. But here is the key. George Soros has long had his fingers in the Vatican, has placed people there and has manipulated some of the policies coming from inside.

When Francis suddenly became pope, with great secrecy surrounding the pageantry, the first words out of his mouth came straight from Marx’s Communist Manifesto: “We first must re-distribute the wealth.” He then went on to say that to be wealthy is a sin. I received a frantic call from a friend on the East Coast who was afraid she was going to hell because she was wealthy. Most of the things he said had an unmistakable Communist slant.

It is to be noted that Pope Francis was presented a hammer and sickle crucifix from President Evo Morales.

According the the prophecy of St. Malachy in 1131, the last pope would be revealed as the False Prophet. That would be about the same time as when the Anti-Christ is identified.  St. Malachy stated that the 112th  pope after him would be in place when that prophecy is fulfilled.  Pope Francis is indeed the 112th pope since that vision.  There is no question that George Soros put him in that position the same way he put Obama in position with the goal to take down America, the only country standing in the way of total world domination by Soros and his sons. This is what all this confusion is about.  Soros now intends to destroy the church itself. Then, he’s home free.

This columnist is very careful when writing about Joel Osteen. He is the object of such scorn by jealous pastors that I weigh any incoming news about him skeptically. In this latest story by WND, Joel apparently says that God does not reject anyone and the story makes it appear as though Joel has caved in to the homosexual lobby. According to WND, he did say this: “God absolutely APPROVES of everyone (emphasis mine) including homosexuals.” Not according to the Bible.

Osteen is promoting a new book in which he says, “It doesn’t matter who likes you or who doesn’t like you, all that matters is God likes you. He accepts you, he APPROVES of you.” He went on to state all people must be acknowledged for who they are and expressed reluctance to “categorize” sin.  Isn’t that what pastors are supposed to do?

That is the problem of our pulpits today. Sin is slipped under the napkin and stays there without being dealt with.  A pastor must address sin as it is addressed in The Bible. Osteen says in his book, “I believe every person is made in the image of God, and you have to accept them as they are, on their journey. I am not here to be preaching hate, pushing people down. I’m not here telling people what they’re doing is wrong.”  In other words, remain silent.

So if a pastor doesn’t keep people on the right path and neglects to advise them when they are living beyond the guidelines as instructed by God in His Word, the Bible, then who will? Nobody. Church is closed.

Osteen went on to tell Chris Wallace on Fox News that he doesn’t dislike anybody and believes gays are some of the “most loving people in the world.”

Joel Osteen is truly a “good ole boy.’ He loves everyone and wants everyone to love him. He would not deliberately offend anyone. So it is easy to see how he could be caught in this trap of agreeing with the world. A pastor MUST show that he or she believes in something and will take a stand regarding that belief, especially the Bible, otherwise, what is the purpose of one being a pastor?

Joel’s sermons encourage everyone which is not a bad thing, but this cannot be done in the absence of truth. Otherwise it is totally dishonest.  We are either servants of God or we are not.

We would ask that Joel, whom this writer likes, ask interview hosts in advance not to bring up the subject of homosexuality or other dividing controversies. Let your interview be simply encouraging with Scriptures and success stories.

Meanwhile, with two of the biggest names in Christianity in the news raising disturbing questions, George Soros and Satan are rejoicing and no doubt sharing a toast we all pay for and will be sorry for.

This cannot go on. Unless we take a dedicated stand, we will lose our lives and our country.  It is up to the preachers to put a stop to this. PASTORS: MAN YOUR PULPITS!