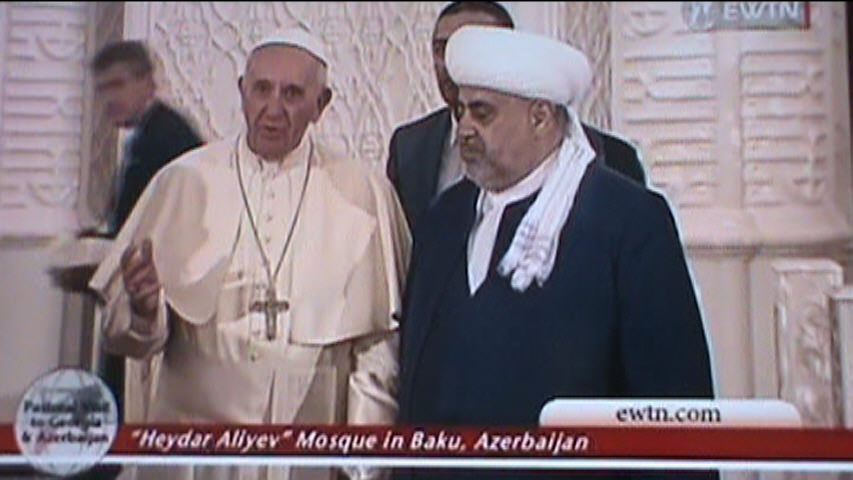 THE POPE CONDEMNS ALL FUNDAMENTALISM

This weekend, the liberal Pope Francis stood in the Heydar Aliyev Mosque in Azerbaijan, to proclaim, “God cannot be used to justify any form of fundamentalism.”

A message warmly received by Muslim, Jewish, and Russian Orthodox representatives, as well as his papal entourage, it nevertheless was a shock to America’s 25.4% of evangelical Christians.

Not to mention those Catholics who reject modern theology, in favor of more traditional doctrines, also considered by some scholars as fundamentalists.

The Pope’s condemnation of all fundamentalism is the result of major changes traced to Vatican II. In 1962-1965, Vatican II’s Secretariat to Promote Christian Unity dominated the council with its leftist agenda.

Directed by Cardinal Bea, the Secretariat focus went from the uniting of Christian sects and denominations, to the uniting of world religions. As a result, thousands of priests and tens of thousands of nuns made their exodus from Catholicism in the late 1960s.

If Pope Francis had reigned prior to 1962, his message would have focused rather on the welcoming of Christian fundamentalists into Catholicism, perhaps with the congenial conciliar methods employed by Pope Leo XIII.

More specifically, from where did this condemnation to include Christian fundamentalists, emerge? We see a major clue in 1967 when Cardinal Villot, on his retirement, received a congratulatory letter from the Masonic Parisian Lodge, congratulating him on the subjugating the traditional papal role – of ruling on faith and morals – to the implementation and advancing of Freemason policies.

This was certainly the spirit and substance of the ominous papal words in the Azerbaijan mosque, “”God cannot be used to justify ANY form of fundamentalism.”