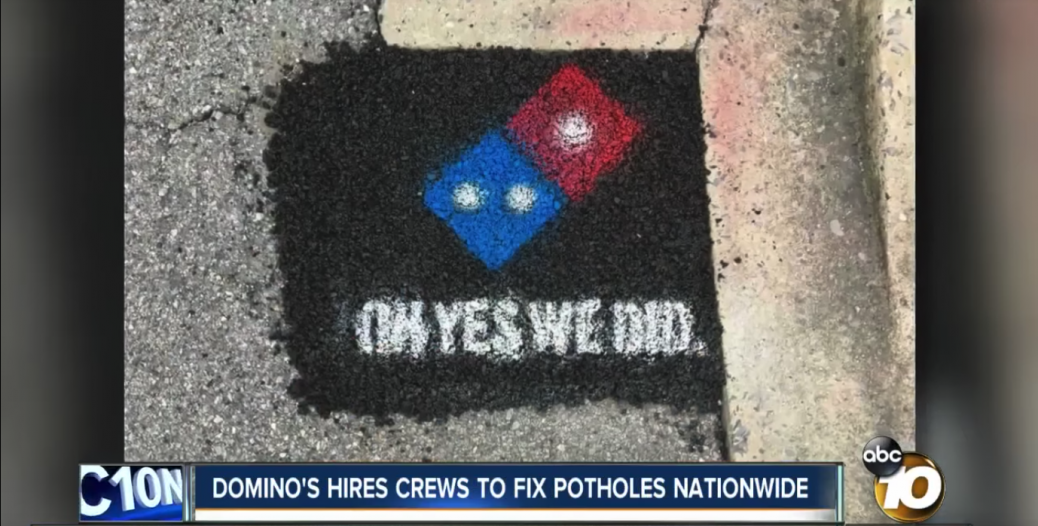 These are some thoughts brought on by reading a piece that was put out by BusinessInsider.com about Domino’s Pizza fixing potholes.

As someone who has been highly critical of advertising for many decades not only because of the sleazy and sneaky manipulation they use, but also because of the money suck that they are. Companies are pouring millions into advertising their wares and how do you think it’s paid for? By increasing the cost of the product! Back in the hot and heavy “cola wars” days I opined that if one of the companies made one last huge advertising push telling people that they were going to stop running advertising and use the savings to cut the cost of their beverage, their sales would leave the other in the dust. If you could get a Coke for 50 cents and a Pepsi for $1, which would you buy?

That said, companies are going to advertise. So, would you rather they spend that cash on radio and tv ads to pour nonsense into your ears, or to pour asphalt into your potholes? To disparage it as “privatization” may be a partial truth, but no one complains when they spend the money on charities. Instead they are lauded. Consider the old saw “charity begins at home.” If they want to advertise by making their surroundings better and improving things for everyone, let them!

Now for the “dystopian” aspect. Is this the ideal solution to infrastructure overhaul? Maybe not, but it works and I encourage it and would like to see more of it. I think the term “dysfunctional” is actually the better, more appropriate term for what is happening with our crumbling infrastructure right now and it all has to do with what a majority of people have come to view as the definition and role of government. Let’s start from the top and work our way down. The federal government is responsible for building and maintaining interstates, not patching the pothole in front of your house. The state government is responsible for state roads, not your neighborhood potholes. The county is responsible for the county maintained roads, so it’s possible that they ARE responsible for you pothole if you live alongside one. The city government, however IS responsible for those axle jarrers.

Now we have looked at the role of government in maintaining our infrastructure so that you can accurately point a finger at the dysfunction responsible for your particular “pothole.” But, as I mentioned above, it is my opinion that the real problem is in what people see as the role and function of government. This great nation of ours is not as it is so often mis-identified, a democracy (thank God, because the actual literal translation from the Greek would be “mob rule”) but instead it is a Constitutional Republic founded on democratic principles. It was designed not to rule over us, but as a means for us to rule ourselves. WE are the government. The dystopia comes from us. The dysfunction is ours. To correct it, we must start at the very most basic building block of the whole, which is the family. Then the neighborhood, of which your local pizza parlor, church, grocery store, etc.  are definitely a part of and should contribute to. Then the town or city, county, state, etc. as we organize larger and larger.

So you see, the ultimate solution is not found in some fuzzy “they” that we look at to take care of us, or blame when things aren’t done or go wrong because there really is no “they.” It is us. The “we the people” that make up all of our institutions from that pizza parlor down the street to the overly vast federal government up in D.C. There is no “they” to fix it, there is only us and we need to get started. There’s a lot to do!