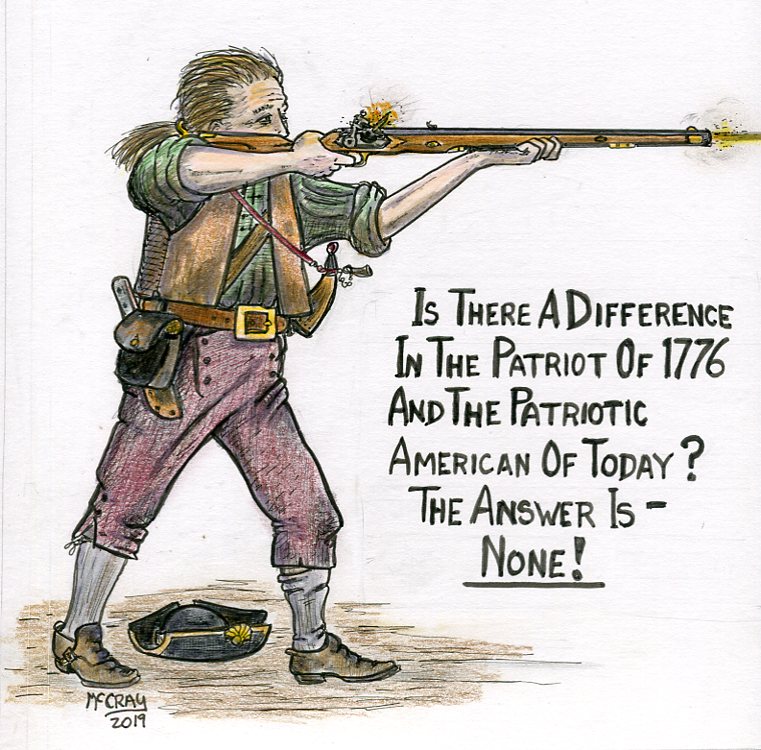 Is there a difference between the Patriots of 1776 and the Patriotic Americans of today, the answer is none, time and technology is the only thing that has changed. The enemies of our republic may have changed but the goals are the same, the destruction of the freedom of will and free people.

In 1776, British Colonies ran from the Caribbean Islands to the northernmost land mass of what is now Canada, of these, a group of 13 colonies on the eastern seaboard of what is now the United States broke away from the British Crown. As we know from history this was not a clean breakaway by any means, more troops were sent from England to back up their existing force. Those in the colonies who remained loyal to the British Crown were called Tories and in some cases, they had their own militias. It was neighbor against neighbor and relatives against each other in some areas, in addition to the British Army moving forward in large military actions. In the face of all of this opposition, the Patriots stepped forward and continued to struggle for freedom, ending with the formation of the United States.

The institution of our Bill of Rights has been hammered with coordinated attacks from all directions by the Socialist left. They have been successful in suppressing free speech on most of the university campuses, and the press has been presenting propaganda instead of accurate news. Socialist has made efforts to control the 2nd Amendment by banning firearms with prominent politicians wanting to jail people who refuse to surrender their legally owned firearms. They have controlled the schools for years providing a breeding ground for the activist of socialism, cities under their control flaunt their violations of Federal Immigration Laws. Organized socialist thugs have attacked peaceful protest of those who object to the ongoing socialist activities. Antisemitism is on the rise and abortion has moved up to the desire of euthanizing newborn babies, which is murder.

The socialist have succeeded in producing a couple of generations of people who are ignorant of our national history and world history or how our government is supposed to work. Now we hear the statements of Karl Marx and Adolph Hitler thrown around as the gospel truth. If someone tries to correct these people by acquainting them with the facts, they are immediately attacked verbally and in many cases physically.

The 2020 election is our best chance to educate the gullible, President Trump in his announcement of running for a second term is clearly outlining the problem of socialism and how it is deeply embedded in the Democrat Party. Every opportunity needs to be used to educate the uninformed to the dangers of socialism, that it’s nothing more than a smiley face on Communism. Over 40 countries have tried socialism and failed, North Korea, China, Cuba, and Venezuela are today’s shining stars of socialism. It seems that the only people who want socialism are the ones who want to control it, socialism is a tool used to control the people, not to benefit the people.