Pancho Villa and Other Nuisances… 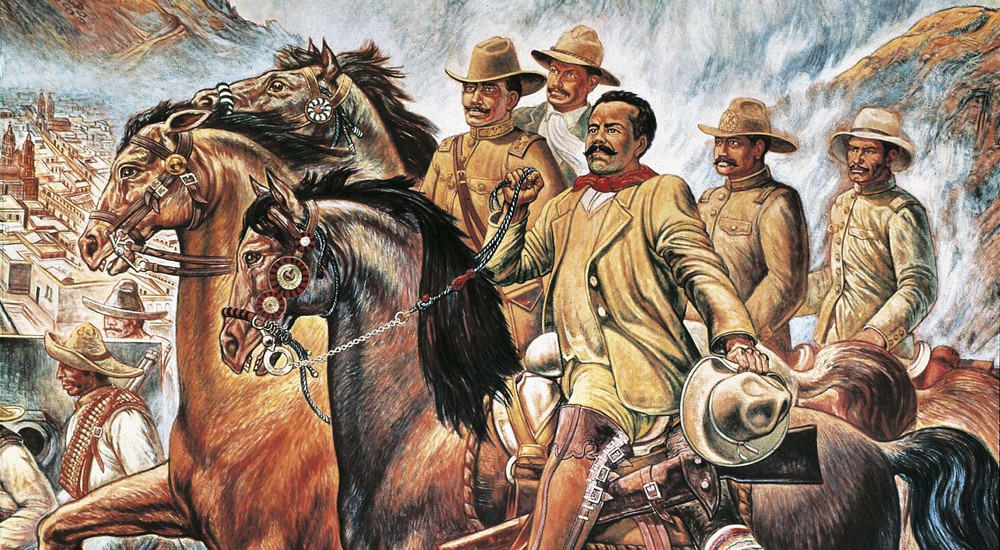 It was a typical New Mexico morning, on March 9, 1916.  The small town of Columbus awoke and people were starting to go about their daily routines…but this was not going to be a routine day.   The American President, Woodrow had been lending support to Venustiano Carranza, the opposition leader to Victoriano Huerta whose administration Wilson had described as a “government of butchers”.   Unfortunately, Carranza proved to be no better than Huerta.  Wilson then turned to a rebel leader, a man named Pancho Villa.   Villa was an adopted name.  The real name of this bandit leader was Francisco (Pancho) Villa born José Doroteo Arango Arámbula, born in Durango Mexico on June 5th, 1878, he was from the peasant, or peon, class…but he had ambition.

It was that ambition that drove him to team up with another ambitious rebel leader, Emiliano Zapata.  They wanted to keep the rebellion going, but it was going to take money, power, and guns.   Somewhere along the time-line President Wilson got to thinking that Carranza was on the right track and that he, Wilson, no longer needed Pancho Villa…and he dropped his support.  This withdrawal of support for Villa so aggravated Villa that he declared war on the United States.  And that brings us to what Villa did.  Pancho Villa stopped a train in Mexico, but which had 18 Americans on it.  He took them off the train and killed them all.

A few weeks later, on March 9, in 1916, Villa led an army of about 1,500 guerillas across the border to stage a brutal raid against the small American town of Columbus, New Mexico. Villa and his men killed 19 people and left the town in flames.   Woodrow Wilson called on the US Army, under General John “Blackjack” Pershing, to lead 6,000 troopers into Mexico to capture and/or kill the bandit, Pancho Villa.   For two years, Pershing pursued Villa, on horseback, in automobiles and even the new-fangled airplanes…but he never caught him.

By this time Carranza had lost patience with the American Army in his country and ordered them out.  Pershing went on to become the leader of the American Expeditionary Force(AEF) in World War One.  Although he never actually caught Villa, he did convince him never to attack the United States again.  Pancho Villa retired from banditry and was eventually assassinated in 1923 while on his way to become the Godfather to a friend’s child.

Fast forward now to the present.  We no longer send expeditionary forces in to wipe out foreign leaders.  We have special operations teams to try to do the work without actually harming anyone…other than the intended target, that is.   Who might some of these nuisances be?  There was Osama Bin Laden, and we got him.  There was Moammar Qaddafi, but his own people got him.  There was Saddam Hussein, and he was hanged by his own people.   Still around is the North Korean Kim Jung Un, the little fat boy dictator, several people connected with ISIS, whose names I cannot pronounce, and if we had something other than a spineless twit in the White House we could get rid of them also.

It just seems to me that when duty called we had men and women to answer that call.   These were young men and women stepping up and putting their civilian lives on hold while putting their lives on the line in combat.  Today’s armed forces are being hamstrung by ridiculous rules of engagement which actually give the enemy the advantage.   What good is superior technology if you cannot use it first.  What good is technology if the troopers don’t understand how to use it, or it’s too bulky to move around easily?   We hear of sorties into areas controlled by ISIS and the bombing of a truck or a building…surgical strikes they call them.  Some of these sorties come back without firing a missile or dropping a bomb.  Maybe we are just a nuisance factor to ISIS.

While on the subject of nuisances, what about our borders?  Are we to continue to have such porous borders that we no longer resemble a sovereign nation?  If you look at the areas now controlled by ISIS the borders of those countries seem to have melted away and in their places is something called the Islamic State.  The lesson is very clear, at least to me…if you have no borders, at least none to speak of, you cannot be considered as a sovereign nation.  You become simply a territory of some name or another without real meaning and, sometimes, without a real government.  A good example of this, aside from ISIS is Somalia.  Although they have borders of a sort, bandits and pirates operate inside and outside those borders as if they didn’t exist.  There hasn’t been a true, working, government in Somalia for several years now.

Nuisances exist in many forms, not the least of which is government itself.  Our country was formed with the idea that government people were elected for a term or two and then they went home and continued on with their lives.  Serving in Congress was never meant to be a career, and those making it so seem to have created an elite class completely disconnected from their constituents.   Wake up America, your country needs you…desperately.