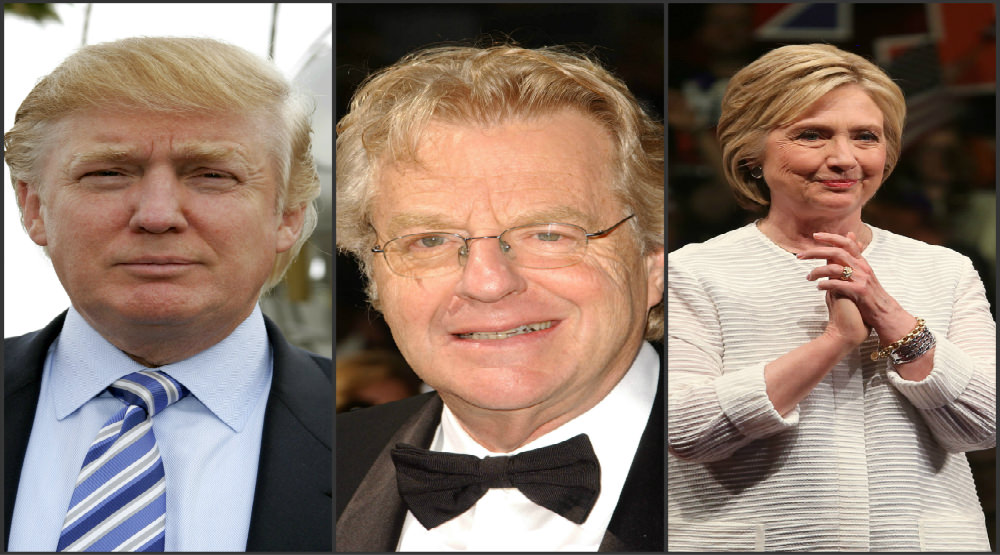 Wow, this election cycle has been one that Jerry Springer himself could not have scripted more imaginably.  We have two of the most reviled candidates to ever oppose each other in a presidential election and yet we focus on them and their actions (current and historic) rather than the substantive underlying policy.  I’ve got news for you folks: neither of these candidates should be your moral compass.  If you anchor morality to anything other than your faith, you’re bound to be let down; and your elected officials will, most likely, be the first to let you down.

On the one hand we have a candidate whom I would consider to be among the most corrupt U.S. politicians to ever live.  She is corrupt because she does not think that the laws of the land apply to her…that she is above such inconvenient encumbrances.   On the other hand, we have a candidate who unabashedly alludes to the reality that politicians are akin to whores who can be paid to sums of money to fashion laws and policy in order to make would-be illegal actions perfectly acceptable.  One candidate is above the law; the other has fashioned the laws to make the distasteful perfectly acceptable.  Ironically, one candidate has actually funded his opponent in the past…talk about strange bedfellows!

The separation of powers also matters as much as policy matters.  Trump has laid out conservative options as replacements for the Supreme Court vacancy.  Constitutionally conservative justices who won’t legislate from the bench; but who instead will interpret the Constitution are key.  With them, the separation of powers is upheld.  Without them, the Executive branch is emboldened.   A Conservative court keeps a maniacal president in check.  A rogue court is a rubber stamp.  While Clinton has not laid out Supreme Court justice nominees, one could place good money on the prospect that her choice will be ultra-liberal; judicial activists.

I consider myself a purist when it comes to politics.  I seek my answers in the documents of our land: The Declaration of Independence, The Constitution, the Federalist Papers, etc.  If my kids ask me if George Washington was our first president, I’ll remind them that we had 13 years of declared independence prior to Washington being elected, and I’ll remind them about the Presidents of Congress under the Articles of Confederation (the Presidents of the United States in Congress Assembled).   In short, I remind them to pay attention to history.  Even in those old days, politicians weren’t perfect: Lincoln’s friend, Joshua Speed, once gave him a letter of introduction to a prostitute.  Lincoln stripped down prior to asking “how much?”  When he found that the prostitute needed $5 and he didn’t have that much on him, he got dressed and left rather than being indebted to a prostitute.  Yes, Lincoln used prostitutes prior to his married days!  George Washington acted as judge and jury, ordering the execution of several mutineers who threatened desertion.  Washington had 3 executed as an example and forced the others involved in the insurrection to execute their peers (a little rougher than water boarding).  Alexander Hamilton, primary author of the Federalist Papers, had a voracious sexual appetite and was engaged in the nation’s first public sex scandal shortly after our nation’s birth.   The list goes on.  These folks did okay through policy and action; but, personally, they were flawed individuals.

Flash forward and you’ll see that many political and social leaders continued to be morally flawed.  J.F.K. was legendary not only for his extramarital affairs, but also for his drug use (shots from Max Jacobsen, or “Dr. Feelgood”).  Even during the Cuban Missile crisis, Kennedy was high on amphetamines.   Martin Luther King was also a legendary adulterer.  The night before he was shot, one of Martin Luther King’s mistresses spent the night with him at the Hotel Lorraine.  Bill Clinton, while president, not only engaged in oral sex with an intern (well, actually she had oral sex with him and he did not have sexual relations); but, he also penetrated her vaginally with a cigar and was likewise linked to many other women while married.  The list goes on and on and on and on.  The moral of the story is: don’t look to political leaders as your moral compass.  You’re lucky if they can get the policy part right.

As reprehensible as actions are, words are also ammo in a political competition.  This week, words spoken by Trump some 11 years ago also entered into the fray.  The words spoken were pretty pathetic.  But, honestly, I’ve heard worse from other males: in board rooms, in locker rooms, on the golf course, etc.  Yes, men can be pigs…especially when around other men and they don’t believe that they are being recorded.   While I strive not to engage in such sexually debased commentary, I’d be lying if I said that I never heard it before; and with great frequency.

Go ahead and google “sex in the city quotes.”  Ah yes, a popular culture show about the things that empowered women say about men when they’re in the private company of their girlfriends.  I can tell you that I have heard from many women: if you think men are disgusting, you should hear how a group of women talk when they are in private.  Yep, we live in a society when “50 Shades of Grey” is flying off the shelves and being read by strong women everywhere; all without shame or shock.   We also live in a society wherein a conservative woman (Ann Coulter) was called the “c word” 19 times at the Rob Lowe roast, just two months ago.  Nobody cared.  Nobody defended her.  She was fair game and many liberals would argue that she got what she deserved.

So: we have a couple of crappy choices for president, political leaders tend to have a broken moral compass, both men and women are pigs in certain social circles, and society has gone to hell in a hand-basket.  All that being said, one candidate has a woman as their campaign manager and that candidate isn’t Hillary.  Now isn’t that funny?  How could such a sexist man allow a woman to run his campaign?  Is it because she’s the most qualified or is it an elaborate scheme to bed her?  I think we know what the real answer is.

So, let’s apply the Clinton standard.  Clinton exposed national secrets on a non-secured server; a server that was maintained by folks without the requisite security clearances.  Hillary said that she was sorry and she won’t do it again.  Isn’t that enough?  Trump said some disgusting things in private, years prior to announcing his candidacy.  He has apologized.  Isn’t that enough?  Are the words of one candidate not worthy of the same forgiveness as the actual actions of another candidate?  If the answer is that words matter more than actions, okay, let’s focus on Hillary’s words too.  She has called women “bimbos.”  She called one woman in particular a “narcissistic loony toon”….until Hillary’s husband’s sperm magically jumped through his clothing and on to the loony toon’s blue dress.  No apologies for that.   Any apologies to the 12 year old rape victim when Hillary defended her alleged rapist? Hillary intimated that the that the 12 year old got what she had coming to her because she had “a tendency for seeking out older men;” and, she laughed about how she cunningly got evidence thrown out.  Do those words matter?  Also no apologies for calling half of Trump’s supporters a basket of deplorables.  The only apology was that 50% might not be apt.  Words matter, actions matter and yes; forgiveness matters too.

Let’s focus on the other “p word,” policy.  Both candidates are so flawed that focusing on anything other than policy will make you crazy.  If you can readily shift from candidate to candidate based on whatever stupid thing that they say from week to week, you are a bipolar voter.  One candidate is not a proxy for the other this time around.  Let’s not pretend that candidate substitution is an option.  At this stage of the game, you’re either voting for a candidate’s platform or voting against the platform of another; period!