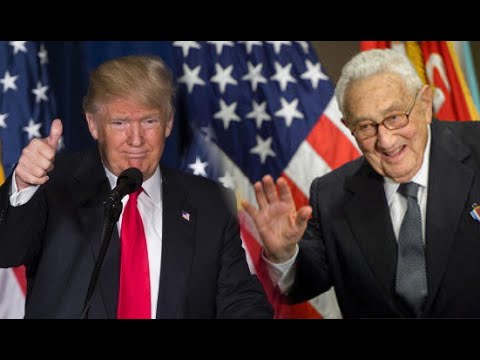 Donald Trump the “outsider” met last week with the top “insider” guru of World Government, ninety-two-year-old Henry Kissinger. For a campaign that is built upon “Make America Great Again,” Trump’s closed-door meeting with a chief architect of America’s demise is troublesome, to say the least.

As reported by The Daily Telegraph,

“Mr. Kissinger is the latest in a string of policy experts sought out by Mr. Trump as he looks to reassure the Republican establishment that he is not, as Hillary Clinton has described him, a ‘loose cannon.’”

The Daily Telegraph goes on to point out,

“…the meeting marks a concession of sorts from Mr. Trump, who has long said that he trusts his own instincts on foreign affairs rather than the supposed wisdom of the foreign policy establishment.”

The Telegraph’s analysis is, to say the least, shallow. While correctly highlighting the inconsistency of a supposedly non-establishment candidate confabbing with Mr. Establishment, the analysis lacks proper perspective. The former Secretary of State and national security advisor is perhaps the foremost anti-Constitutional anti-American alive. That is saying quite a bit with the likes of Barack Obama in the neighborhood. The evidence is overwhelming to those who care to examine the record for themselves.

To set the stage, consider the following. In 2010 the website of the National Security Archive at George Washington University posted a newly-released transcript of a secret meeting between Henry Kissinger and a Turkish Foreign Minister Mehli Esenbel that occurred on March 10, 1975. Kissinger was then Secretary-of-State. Kissinger remarked, “Before the Freedom of Information Act, I used to say at meetings, ‘The Illegal we do immediately; the unconstitutional takes a little longer” [laughter]. But since the Freedom of Information Act, I’m afraid to say things like that.”

The complete dossier of anti-American policies that Kissinger helped to shepherd through Republican and Democrat Administrations is a lengthy list. The most notable, perhaps, is his secretive negotiations with North Vietnam which betrayed our veterans and POW’s of that war in the most treacherous manner possible. Kissinger himself, practically single-handedly, delivered South Vietnam to Communist control and abandoned our POW’s as they rotted in their torturous prisons.

Prior to 1968 when he became Nixon’s national security advisor, Kissinger told colleagues that a U.S. military victory in Vietnam was not possible nor desirable. So wrote Marvin and Bernard Kalb in their book Kissinger. It was Kissinger’s belief, they observed, “that the most that could be salvaged from U.S. involvement in Vietnam was a ‘decent interval’ between an American pull-out and … a Communist takeover.” It is all about appearances.

While therefore orchestrating America’s defeat, for Washington, D.C. did not intend on winning, Kissinger then helped shape that policy which prolonged U.S. involvement. Our military became the sacrificial lamb as servicemen continued to die in the jungles of South Vietnam. Finally, in 1972 at the Paris Peace Conference 2,400 American soldiers were designated as POW/MIA’s. But less than one fourth of those were returned between February and March of 1973. The number was 591. Then, shockingly, Henry Kissinger declared: “There are no prisoners in Southeast Asia. They are all dead.”

Americans were and continue to be rightly suspicious. Just days prior to Kissinger’s “they are all dead” announcement, the Communist Pathet Lao confessed to holding more captured Americans. Further, an April 1974 Defense Intelligence Agency report concluded that there were still several hundred living POW/MIA’s remaining in Communist captivity in Vietnam and Laos. And a 1991 Senate report entitled An Examination of U.S. Policy Toward POW/MIA’s documented that the number of Americans left behind in southeast Asia may have been as many as 5,000. So, what had occurred that caused Kissinger to deny the existence of American POW’s?

Little known to Americans, Hanoi had demanded reparations for “post-war reconstruction” and Kissinger had secretly agreed to this in Article 21 of the 1972 Paris Peace Treaty. Our national security advisor, without the consent of Congress, placed the American taxpayer on the hook for rebuilding Vietnam. Next, Kissinger hand-delivered a letter from President Nixon to the North Vietnamese prime minister in which he promised nearly $5 BILLION in economic aid to the Communists. But when the elected representatives of the American people—Congress—got wind of Kissinger’s agreement, they voted to reject any aid to Hanoi. There would be no money.

As Mark Sauter and Jim Sanders observe in their book The Men We Left Behind: Henry Kissinger, The Politics of Deceit and the Tragic Fate of POW’s After the Vietnam War, Nixon and Kissinger, who had apparently promised money for the remaining U.S. POW’s, now simply “chose to deny their existence.” In other words, our remaining POW’s had been offered up as hostages by Kissinger to the Communist government until such time as the Nixon Administration would funnel them the money they demanded. When this was not going to occur, instead of owning up to the secret negotiations which promised to “pay” the Communists, Kissinger simply denied there remained any POW’s.

The real end of all of this betrayal and treason by Kissinger is explained by Admiral Chester Ward and Phyllis Schlafly in their 1975 book Kissinger on the Couch, Kissinger has “one objective.” That is to “bring about the surrender of the sovereignty and independence of the United States.” That the leader in U.S. sovereignty sell-out meets with Donald Trump, who waxes bold about treating our vets honorably, ought to cause alarm bells to ring among those who care about America.