Otra Nation: The Mexico/U.S. Solution from the Future or Liberal Daydream? 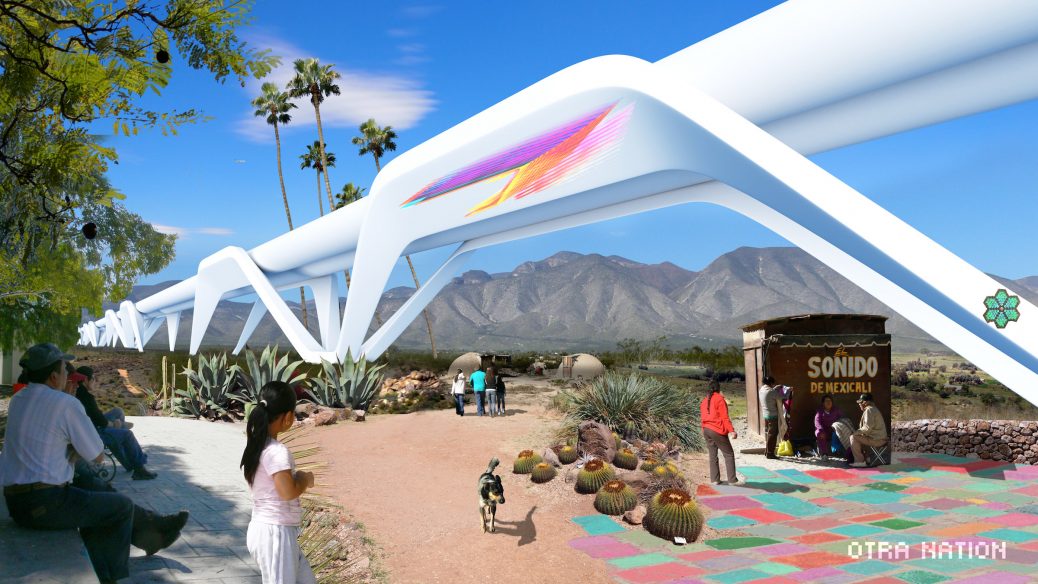 If you are a starry-eyed daydreamer-visionary – embrace the idea!
If you are a cynical die-hard misanthrope – hate it …

For people familiar with futuristic “Venus” concept of the legendary Jacque Fresco, the Otra Nation proposal may look like a testing grounds to bridge nations by creating communities based on shared principles of economic resiliency, energy independence and a trust based society.

As the Proposal states: “Create a resilient response to the current issues surrounding the border between the United States of America and Mexico, through the creation of the world’s first Regenerative Open Co-Nation.”

“Another Nation” strategy, if accepted, will allow to build an “Every-man’s Land” instead of “No-man’s Land.” A 40 km wide (20 kilometers on each side of the border), almost 2000 km long transnational regenerative agriculture “belt” that will become the “bread basket” of two countries, will create tens of thousands of jobs. A high-tech ecotopia, powered by vast solar farms and connected with a hyper-loop transportation system. Bio-metric checks identify citizens and visitors, and relaxed trade rules will turn the “belt” into a booming economic hub.

More than 80 million people in four U.S. and six Mexico States, from the Gulf of Mexico to the Pacific Ocean, comprising the North and South vicinity of the “belt” region. Its combined annual GDP is approximately $3.8 trillion. In the last twenty years, trade between the United States and Mexico has grown sixfold, totaling more than a half-trillion dollars each year. Approximately 80% of that, more than a billion dollars each day, crossing at the U.S. – Mexico land border. More than six million U.S. jobs now depend on bilateral trade. The agricultural production of this region represents more than half of the US National total in fruits and nuts production.

The “belt” would cost approximately $15 billion — less than the $21 billion that the Department of Homeland Security estimated a border wall would cost. The designers also predict that their system would create $1 trillion in trade.

Regenerative co-nation may be shared by citizens of both Mexico and the United Stated and co-maintained by respective governments. Physical land and the initial investment will be provided by both countries and the infrastructure and services will be built with a 50/50 workforce of Mexico and U.S. Otra Nation will be the worlds’ first continental bi-national socio-ecotone. As a transnational subsidy free special economic zone, it will ensure that both the United States in the North and Mexico in the south will have sustainable healthy food for generations to come.

Cameron Sinclair, co-founder of the nonprofit Architecture for Humanity and winner of the TED Prize in 2006, is the most high-profile MADE Collective member and its spokesman. As Adi Robertson writes in his article “… Team members decline to put their names or faces on the website; their group photo shows human figures with animal heads pasted above their shoulders. Sinclair and others say that the group remains quasi-anonymous in order to keep the focus on Otra Nation, rather than the people behind it. In addition to generalist architects and designers, MADE supposedly includes members with close ties to past US and Mexican government administrations. One person also claims to be working on an undisclosed hyperloop-related project … When I ask for a best-case scenario for founding Otra Nation, Sinclair outlines a complex but surprisingly compact road map. By 2018, the US and Mexico would sign a bilateral agreement to form the zone, and the estimated 40 million future members of Otra Nation would have their own vote, guaranteeing their consent. Meanwhile, the Made Collective would secure funding in the form of either government contracts or multi-billion-dollar private investments. The group would begin working with companies to lay hyperloop and solar power infrastructure, while also creating the biometric ID system for citizens. “I would say by 2022 we would be underway,” he says. “if everything went well, including getting the vote from the people that would now become residents of Otra Nation, I would say [it could open] by the mid-2020’s.”

Read the Otra Nation Proposal to find out how the Trump’s wall alternative project could be implemented.