One Size Fits All… and other Fables 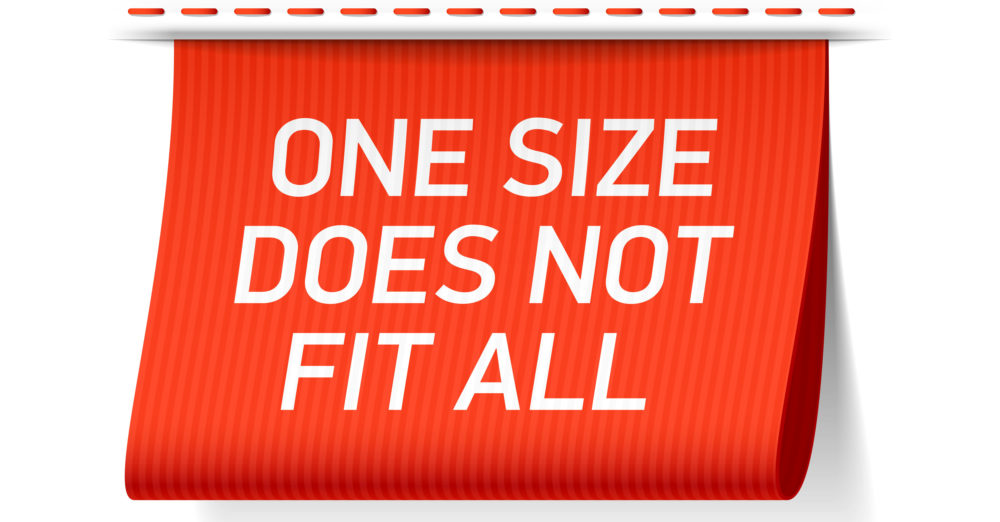 It might be just my imagination but the world, and in particular the United States, seems to be drifting to the conclusion that one-size-fits-all…and nothing could be further from the truth.  Let’s look at a few examples of this wrong-headed thinking, and perhaps the hottest topic in that area is the bathroom and who uses what.   If ever there was a topic where one-size-fits-all doesn’t work, it’s that one, because if that were true there would be no need to have separate facilities for males and females.

There would be just one facility for everybody.  Think of the money that could be saved by building just one restroom at a sporting event, in schools or at the local shopping mall.  Then, you wouldn’t have to declare that today you “think” or “feel” like you’re the opposite gender because the one facility would be there to utilize regardless of your sex.   We’ve already heard of males going into female restrooms, but you will hardly ever hear of a female going into the male bathroom…they’re just not that interested in us.

Peace…now there’s a word that conjures up all sorts of things.  To dictators it probably means that they, and they alone, have the final word on everything…and that’s peaceful for them.  Nobody would question anything because they’d be killed or at the very least, they’d disappear and never be heard from again.   In a democratic society like most of the civilized world, it mostly means a time when there is no war…at least none in which that particular country is engaged.   For one particular religious cult, Islam, it can only be achieved when all the world has submitted to it, and until that takes place, true believers will be at war with “the West”, or civilization as we know it.   Even the United States, in its sometimes misguided efforts, has tried to bring some sort of democratic government to places where tribal, religious, or ethnicity differences simply would not allow it to work.   One-size-does-not-fit-all in governments either.

Closer to home, we have Obamacare, or the Affordable Care Act(ACA) which is the official name.  If ever there was a failure of the thinking that one-size-fits-all, this would be it.   To lump large numbers of people into some sort of health “class” is simply ridiculous.  Even in a marriage, which would be the smallest “group” that one might encounter, there are bound to be differences in health, and healthcare.

As it was explained to me, the eventual goal of the Affordable Care Act, was to have a single-payer, and that would be the government.   If there are healthcare differences between just two people, can you imagine the differences that might exist between millions of people?   Certain conditions which existed prior to coming into the ACA are to be covered, others which are contracted after joining the ACA are not covered.   Right there you can see that the one-size concept cannot work.   People, by their very nature, are individuals and even though large portions of the population may ACT like sheep, they’re not really.

Being retired from the Navy I’m especially upset about trying to make this distinctive, sea-going branch of the armed forces look like the ground-based ones.   The Coast Guard as well as the Navy are wearing camouflage which is, in my not-so-humble opinion, stupid.  There is no place aboard ship where camouflage is going to blend in, which is the basic reason for wearing it in the first place.  If based ashore, there are other uniforms for work and dress.  Personally I favor the old dungarees and chambray shirts with either white or blue “dixie cup” hats.  It takes more than a shoulder patch, or a pin on the chest to differentiate one service from another and to say that they are all the same is doing a great disservice to each of our armed services.  Down to police departments in different cities, the uniforms are different, so why try to make it one-size-fits-all in our military?

In the upcoming presidential election we definitely have a choice.  If there is ever a place where the concept of being different from anyone else is important, it’s here.   Whichever person wins out, and I hope it’s the person I prefer, the government is going to take a turn in its direction.   The Republicans started out with seventeen candidates and now have one.   The Democrats started out with four and are down to two, but there are those that will say it’s really only one.   Let’s suppose that we only had a one party system, and that could probably only occur if we had a dictator, albeit a benign one.   That one party could decree that anything it said would become the law of the land, regardless of whether it was good or bad.  Wow!  Talk about one-size-fits-all being a failure, that is a prime example.  No matter who the dictator is or was, sooner or later the people rise up and change the leaders, if not the entire form of government.  A prime example of this is the American Revolution, and following close on its heels, the French Revolution.  One-size-fits-all indeed!  Not here, not now, not ever.