Octopus on a Plane or Jules Verne’s Alternate Universe 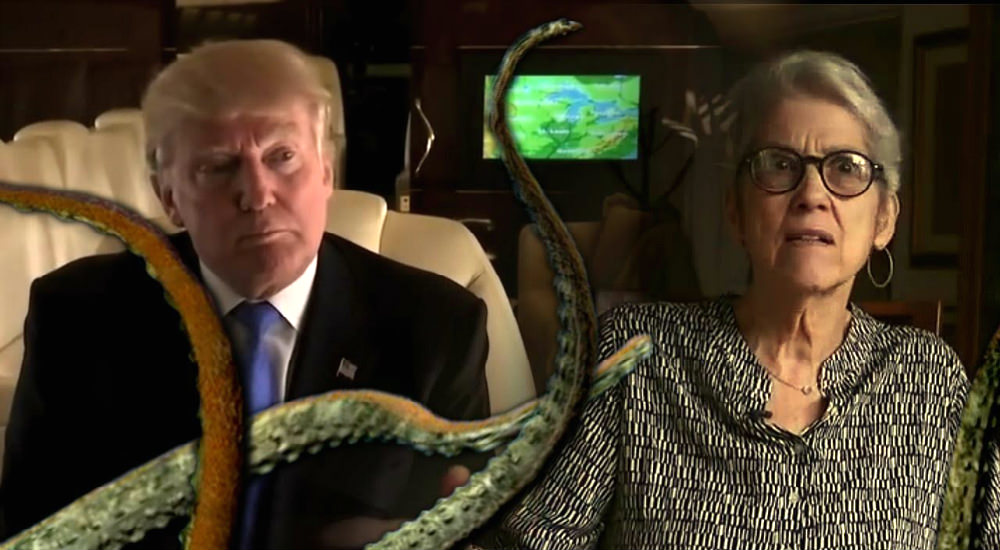 Okay I understand that this election is now getting to the point that it is approaching science fiction.

I think most people remember a horrible (which is becoming the norm) Hollywood movie entitled Snakes On A Plane. I remember sitting through it thinking I had thrown away 17 dollars to watch a compete disaster of a movie except that I remember the popcorn being very good. This week I felt like I was reliving that miserable experience by tuning in to see a woman who clearly looked like the consummate Hillary Clinton cheerleader.

Jessica Leeds sat there telling her tale of “The Octopus on a Plane” I watched as she somewhat gleefully told of moving up to first class and Mr. Trump starting to assault her. She said that she might not have minded if he had stopped at her upper body. REALLY? I think my mother who was born in a much more prudish time would have knocked the living daylights out of him at that moment. As Ms Leeds describes he did not stop there. The armrest somehow mysteriously went away (they didn’t move away in 1st class in that day) and Mr Trump proceeded to go for the gold and maneuvered to let those octopus tentacles search for the forbidden zone. Okay at that point I said WHAT!!!! At this point a serious credibility issue popped in my mind. I visually tried to see Mr Trump and his many hands groping this woman in 1st class in front of a flight attendant and various other passengers.

Sorry folks as hard as I tried to be impartial and believe the fantasy that that woman was telling it just does not add up. I can not imagine any woman over the age of 14 that would not slap, smack or scream to put a stop to this invasion of the body snatchers. Yet she says she simply got up and went back to coach without getting her free peanuts or champagne for the duration of the flight. Come on lady. How stupid do you think we are?

Well if you are a liberal I can understand that you would buy into this tale hook line and sinker regardless of the improbability of it all.

My only other explanation is that this woman actually WANTED to be fondled or groped. Okay I realize the Feminazis will be pulling their hair out at this point but come on this tale is simply that – a tale. This is a woman that clearly is in the tank for Hillary and the New York Times which is a great publisher of all things fiction and false was more than happy to recount her tale. I will not speculate about the other women’s softball team that is organizing to take Trump down, but this account  just reeks of BS. I have now labeled this the Herman Cain syndrome. Actually “the groped woman syndrome” actually started with John McCain which I found rather amusing and then moved on to Herman Cain. Same set of circumstances. Women paraded out by some left wing organization determined to slander and bring down the Republican women vote. They play it perfectly every time. And it usually ends exactly the way we see it now.

This afternoon right on cue there she was GLORIA ALLRED!!! Well folks it is all over now for Mr Trump . Talk about tentacles Gloria Allred looks like she could grow horns and spit fire talking about Mr Trump and his deviant behavior. At that point I switched the channel so that I would not have to guzzle down a bottle of Mylanta. Okay Ms Allred is NOT going to stop me from voting for Mr Trump. Actually I am waiting for the Wikileaks release of the 30,000 e mails that Hillary had acid washed in Clorox or whatever that process was that made them supposedly gone for all eternity. Hopefully Wikileaks got them before that and we can all sit back and watch the BEST thriller ever in the release of all the really GOOD stuff that Hillary so cunningly thought she had deleted. Hopefully this will end Ms Clintons campaign before the election but IF she gets elected we might get another re-run of “All the Presidents Men” except with a younger version of Robert Redford’s character. Mr Redford is too old and resembles my old shoes i saved when I as an acolyte in church 50 years ago.

Wouldn’t it be odd if history repeated itself and Hillary gets in office like Nixon only to have to resign with that phony smile of hers as she departs Washington in shame after resigning the Presidency before she is impeached. God at least Bill and Hillary would share SOMETHING in common .