Obama’s Treason – Dropping the Bomb on Our Veterans 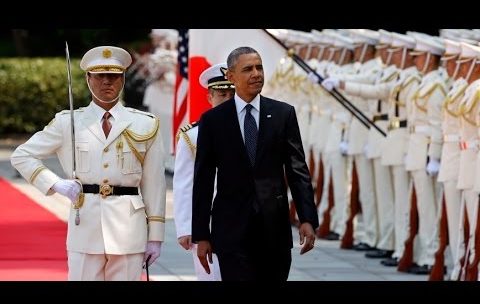 Obama was the first sitting United States President to visit Hiroshima since the bomb was dropped.  Folks on the right were quick to say that the stop was the latest in Obama’s “apology tour,” whereas folks on the left were just as quick to point out that Obama made no apology at all. When all is said and done, I guess the question is: do you have to say the words “I’m sorry” to be apologetic?  Here’s the way that I look at it, after having listed to the speech and having read the full transcript.

Here are a few excerpts, from President Obama’s Hiroshima speech, to examine first (then we’ll build context around these points):

Okay, so he came to Hiroshima to “ponder a terrible force.  ” What could this terrible force be other than a nuclear armed United States?  We also are told that we need to look at history to see “what we must do differently to curb such suffering again.”  Translated, this seems to indicate that the historic decision to drop the atomic bombs on Japan was a decision that was wrong.  If we were to examine what occurred through a modern enlightened lens, we should logically conclude that we were on the wrong side of history.  To me, the two aforementioned statements constitute an apology:  This is Obama’s reality, disregarding the millions of lives that were saved by dropping the atomic bomb, to instead focus on how we were the terrible force that inflicted suffering.

Next there was the dig at organized religion.  Every great religion promises a pathway to peace, love, and greater enlightenment; but, all religions end up using religion as a license to kill.  Make no mistake about it, this was a condemnation of the Christian nation of the United States of America.  We can say that we’re a Christian nation; but, look at what we did to the Shinto nation of Japan!  That’s not what true Christians do.  We were the savages.  This is reminiscent of the comments made by Obama at the National Prayer Breakfast: “Lest we get on our high horse and think that this is unique to some other place, remember that during the crusades and the Inquisition, people committed terrible deeds in the name of Christ.”  There is an implied claim of moral relativism being made here; that the acts of the United States are not Christian because they lack a moral high road (whether we’re talking about the old conflict with the Muslims, the moderns conflicts with the same, or our response to Japanese aggression during the war).  Moreover, it’s not organized religion that can offer the solution to the moral dilemma; it’s enlightened leaders such as Obama.  After all, if there is a need for a “moral revolution” who better to lead that charge than a revolutionary?  Organized religion: you caused this moral shortcoming…I can fix what you broke!   It’s a bit pompous, to say the least.

We also have the comments about man’s capacity to do evil and that we should be willing to give up our nuclear stockpiles to make the world safer.  Naturally, in this regard, “man’s capacity to do evil” can effectively be translated as “the United States’ capacity to do evil.”  There is complete disregard for the unprovoked bombing of Pearl Harbor; the real evil that propelled the United States in to the war.  As for the comments about nuclear disarmament, it’s naïve, at best.  Nuclear technology is like virginity.  Once it’s unleashed, it can’t be undiscovered.  Also, it seems odd to me that such comments would be made just a short period of time after we’ve allowed the world’s largest state sponsor of terrorism to resume nuclear enrichment in Iran (showing that ideology can be compartmentalized for the convenience of a legacy deal).

Speech aside, there is style over substance when it comes to the timing and location of the speech.  Love him or hate him, Obama is an ideologue.   He has his beliefs and he unapologetically adheres firmly to them.  That’s commendable (although I simply don’t adhere to the vast majority of his beliefs).  Would it have been more appropriate for Obama to be at Pearl Harbor, just prior to Memorial Day, or was Hiroshima the best place for him to be?  Was paying homage to the victims in Hiroshima a slap in the face to our armed forces, just prior to Memorial Day? Does the timing and the venue not matter at all; or, was it actually symbolic?  You folks will undoubtedly draw your own conclusions.  I have mine.