Obama’s Legacy is Going Down a Literal Toilet 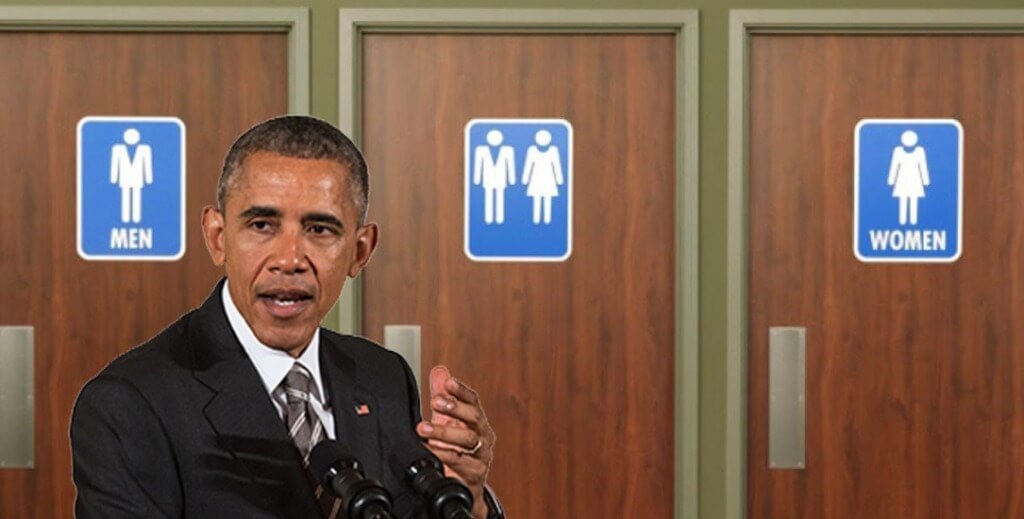 Regarding the national transgender bathroom debate…

Because the transgender population is so small, the simple solution is to add a private bathroom for those who need privacy, such as transgender citizens, families, the disabled, and even extraterrestrials who would be embarrassed to go #3* in a public restroom.

The point is not that transgender folk, in general, are untrustworthy souls.  The point is that predators, of any gender persuasion, will pretend and take advantage of these new toxic emissions from D.C.  (Where’s the EPA when you need it, right?)

We put our children at grave risk when we allow males and females to share bathrooms, locker rooms, dorms and other places where intimate actions are performed in relative privacy, which place people in vulnerable situations.  And, it’s not just children who are at risk.  While adults are better able to resist an attack, smaller adults (especially females) are also placed in danger.

The system currently in place has served its purpose well.  The old saying applies here… if it ain’t broke, then don’t fix it!

Consider the stakes of this recent unlawful E.O. legislation which, as usual, bypassed the perpetually lame ducks in Congress… the purpose is to allegedly try to prevent hurt feelings of a few citizens*.  *According to this link, http://www.timesunion.com/local/article/Transgender-by-the-numbers-2342726.php, there are guesstimated to be 0.3%, that’s one-third of one percent, transgenders in the U.S. population.

How many people are potentially put at risk by shared bathrooms and other private facilities?  That’s easy math even I can do.  The rest of us… 99.7%.  There are approximately 321 million Americans.  0.3% of that is 9,630,000 transgender citizens versus 313,617,000 other citizens.  A lot of people, yes, but a very small (fractional) percentage are being served, while the greater number are being potentially endangered.

Endangered how?  By placing many more people at risk of a lifetime of trauma if a person is attacked and/or sexually abused in a “co-ed” facility, or even death.  A traumatized citizen costs the government money in terms of lost production, interventions from social services, disability payments, etc.

Clearly, the transgender bathroom law is is not the greatest good for our country.  In fact, it’s the opposite.  Why?  I, for one, will not use a bathroom that males are allowed into.  If many people agree, then join me in boycotting any store that allows this practice.  If Walmart does it, I simply will shop somewhere else.  If it’s okay with a store to endanger its customers, then it’s equally okay to just say no to giving them our business.  They have the money and power to fight the illegal E.O.  We don’t.  Let’s give business the reason to fight.  Why?  Because the E.O. just simply is not good for business or for the vast majority of Americans.
Why?  The expense of having to provide bathrooms to accommodate a very small population (and in many areas, a zero population) will adversely affect all businesses, especially small businesses.  How many mom and pop shops will be put out of business?  Dare I say the majority of which ObamaCare didn’t drive out of business?POTUS obviously does not think things through!  This has severe economic ramifications.  But, hey, the economy has never exactly been at the top of his priority list, has it?But, to be fair, if this concerns more than just hurt feelings of a small group of people*, then I suggest private bathrooms.  Because of latent animosity* against LGBT citizens, private bathrooms would actually be a safer solution for transgender citizens.  *Animosity which has been inflamed by the gov’t pushing an contrary agenda down the majority’s throats.

POTUS doesn’t realize that in his quest to support a minority of a minority, he actually is putting the trustworthy transgender citizens in jeopardy.  Haven’t we learned from the Trump campaign that bigotry is alive and well in America?

And, Mr. Obama, what about homelessness and hunger and jobs?  When do you plan to turn your passion to something constructive for the rest of America?

The answer is, of course, that solving those kinds of issues wouldn’t be destructive to America.  So, he’s not going bother.

And, we certainly can’t afford to put an unstable bigot in charge of the U.S. nuclear arsenal as commander-in-chief of the world’s mightiest military.

Both the DNC and the RNC should be sued for pushing on U.S. voters two decidedly unqualified candidates.  They should also be sued for unethically, and perhaps unlawfully, pushing out better candidates just to kowtow to political bullies,  dynasties that grease their palms.

We have to rein in the out-of-control District of Criminals, here and now, before we are, as a nation, utterly destroyed.

A picture is worth a thousand words.  This is Obama’s legacy.  Insane, isn’t it?