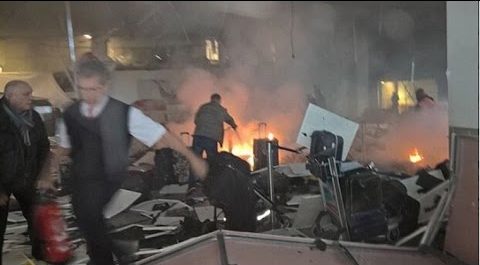 ISTANBUL 6/30/16–There were more than 3 Muslims involved in the Turkey Airport massacre as first reported after the carnage. Now it has been discovered that there were at least 20 Muslims involved in the murderous rampage that killed 44 and left 230 seriously injured. And all of them are supported by Obama, who was raised Muslim, publicly stated that in any situation he will stand with Islam, and stated in his book,  The Audacity of Hope, “The sweetest sound I’ve ever heard is the Muslim call to prayer.”

Obama invites Muslims to The White House for special occasions like, Ramadan, a ‘Holy”season where they feel obligated to kill Westerners but will not invite Christians there, even on the National Day of Prayer.

When the Ft. Hood shootings took place at the hands of a ‘trusted’ Muslim service officer, killing and wounding scores of American soldiers, how did Obama react? By offering prayer in a mosque. We saw the photos of him with the Muslims at that hour, no doubt rejoicing in the killing of United States service personnel.

Obama is in the pocket of Muslims. When two Muslim kids, whose parents, had migrated to this country with refugee status, settling in Idaho, sexually abused a little 5 year old girl, there was absolutely no punishment. The State Attorney General, an Obama appointee refused to agree to a charge against them. Figures!

There is much more to say about that impostor in the White House. Traitorous Republican lawmakers refuse to get him out of office. Obama could easily be removed and charged with treason, yet they just sit on their duffs, where their seat of wisdom is located, and do nothing. No one wants to upset the status quo.

And why do Muslims have so much power in the U.S.? The following spells it out. A minister friend, who wants to remain anonymous, gathered these facts for us. Prepare to be shocked:

World domination from within – much smarter than the Nazis — we should all be worried !

I know that some of you aren’t enthusiastic about Donald Trump but the following does explain some things.

This is absolutely unthinkable that nobody especially the CIA would have noticed this….

This information has all been checked, then double checked… it is 100% Correct.

This is why there is such an alarm within U.S. government, since Trump’s statement about temporary suspension of migration of Muslims to the United States until authorities make sure there is a proper concept of safe penetration of U.S. territory.

You will be stunned to learn that the head of the U.S. CIA is a Muslim! Do hope this wakes up some! Until it hits you like a ton of bricks read it again, until you understand!

We now have a Muslim government in the US!

John Brennan, current head of the CIA, converted to Islam while stationed in Saudi Arabia.

Obama’s top adviser, Valerie Jarrett, is a Muslim who was born in Iran where her parents still live.

Hillary Clinton’s top adviser, Huma Abedin is a Muslim, whose mother and brother are still involved in the now outlawed Muslim Brotherhood in Egypt!

Assistant Secretary for Policy Development for Homeland Security, Arif Aikhan, is a Muslim .

Obama adviser and founder of the Muslim Public Affairs Council, Salam al-Marayati, is a Muslim.

Obama’s Sharia Czar, Imam Mohamed Magid, of the Islamic Society of North America is a Muslim .

Nancy Pelosi announced she will appoint Rep Andre Carson, D-Ind, a Muslim , as the first Muslim lawmaker on the House of Representatives Permanent Select Committee on Intelligence, of all things! It would make Carson the first Muslim to serve on the committee that receives intelligence on the threat of Islamic militants in the Middle East! He has he suggested that U.S. schools should be modeled after Islamic madrassas, where education is based on the Quran!!!

Last but not least, our closet Muslim himself, Barack Hussein Obama.

It’s questionable if Obama ever officially took the oath of office when he was sworn in. He did not repeat the oath properly to defend our nation and our Constitution. Later the Democrats claimed he was given the oath again, in private. Yeah, right.

CIA director John Brennan took his oath on a copy of the Constitution, not a Bible??

Valarie Jarret wrote her college thesis on how she wanted to change America into a Muslim friendly nation and she is a Obama top advisor!

Congressman, Keith Ellison took his oath on a copy of the Qur’an, NOT the Bible!

Conservative Congresswoman Michele Bachman, R-MN, was vilified and verbally tarred and feathered by Democrats when she voiced her concern about Muslims taking over our government!

Considering all these appointments, it would explain why Obama and his minions are systematically destroying our nation, supporting radical Muslim groups worldwide, opening our southern border, and turning a blind eye to the genocide being perpetrated on Christians all over Africa and the Middle East!

The more damage Obama does, the more arrogant he’s become!

Our nation and our government has been infiltrated by people who want to destroy us! It can only get worse!

In his book Obama said, “if it comes down to it, I will side with the Muslims.”

And American Citizens criticize Donald Trump for “speaking badly about Muslims?”  I beg your pardon?  And they really get their underwear in a twist over Mr. Trump saying he would not allow any Muslim into this country without thoroughly vetting them.

What on earth is America drinking or jabbing into their systems with a needle when a presidential candidate wants to put a halt to allowing anyone coming into The United States of America, whose sole purpose is to kill as many of this as they can, expecting to be rewarded with 72 Virgins awaiting them, meaning great sex for eternity?

When will Muslims wake up to the fact that they have been misled, and lied to regarding the evil they have been recruited to perform. They will not grasp the colossal lie behind this immoral “reward” offer that will never happen.