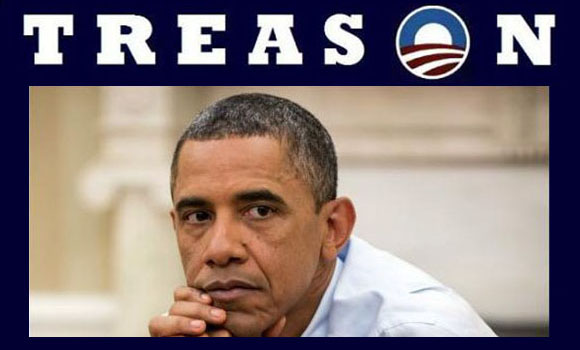 According to 18 U.S. Code § 2381 Obama is committing treason in favor of radical Islam

President Obama is trying to pack the end of his Presidency with what are clearly treasonous acts against this nation, a practice he seems to have mastered over his 8 years as President. Many Americans are scratching their heads and wondering what the end-goal of some of these policies might be, because on the surface it appears that the Obama administration is opening this country up to future attacks and directly putting the American people in danger.

First, let’s start by discussing how the Obama administration is funding The Islamic State (ISIS) in the Middle East. While many leftist Obama supporters rabidly deny this claim, the evidence for this is mounting more and more by the day. Recently, a Canadian journalist called into question the entire Obama administration narrative regarding Syria. She is basically saying that what the American people are being told by the corporate media is entirely false, and that when the U.S. Government says they are funding “rebels,” they are actually funding ISIS. She also claimed that the people of Syria actually appreciate the Syrian government, and they are not siding with the “rebels” as claimed in the mainstream media.

“I’ve been many times to Homs, to Maaloula, to Latakia and Tartus and again, Aleppo, four times. And people’s support of their government is absolutely true. Whatever you hear in the corporate media is completely opposite,” said Eva Bartlett, a Canadian journalist whom has actually had her boots on the ground in Syria. Bartlett continued by saying “And, on that note, what you hear in the corporate media, and I will name them – BBC, Guardian, the New York Times on Aleppo is also the opposite of reality.” This is coming from a reporter who has seen Syria up close and personally and what is really happening in this war-torn area of the world.

Take, for instance, the supposed “White-Helmets,” which have had a documentary made glorifying them on Netflix. In Eva’s words, the white-helmets are “purporting to be rescuing civilians in eastern Aleppo and Idlib…no one in eastern Aleppo has heard of them; and I say ‘no one’ bearing in mind that now 95% of these areas of eastern Aleppo are liberated.”

In other words, the “White-Helmets” are a made-up narrative to try to convince the American people of legitimate push-back against the Bashar al-Assad regime by the “rebel” forces in Syria. In reality, the white-helmets are likely tied to terrorists who are being funded by the U.S. Government, at this point who really knows what they are really up to? The American people, and the world, have been led down a path of absolute deceit regarding the situation in Syria, and the reality of the situation is largely unknown due to the misinformation provided by the U.S. Government.

If that was all there was to this story, those facts by themselves would be enough evidence showing that something fishy is going on at very high levels, however that is not all there is to it. The Obama administration has been setting the United States up for failure for years, and I fully believe they thought that Hillary Clinton would be elected and they would be able to continue their reign of madness in the Middle East and also continue misleading the world about the reality of the situation.

The scope of this situation goes far beyond Syria. This is a complex plan, and there are many facets to it. Unfortunately we are left to speculate given the limited information we have. Obama’s administration has been hiding its true intentions and even garnered support for the lunatic policy of resettling refugees in the United States from the war-torn Middle East by using politically-correct (PC) language which paints of picture of humanitarian aid. If you are an American who believes this is true, I feel incredibly sorry for you. While I believe it to be important for America and Americans to have an open heart and to help humanity in any means they are capable of, I also believe that America needs to take this threat of an Islamic invasion of Western society very seriously.

Multiple times over the past couple of years, ISIS supporting websites have called for extremists to use the migrant wave as cover to make it into these western countries. We are seeing the intentions behind many of the “migrants” with the large number of attacks against European civilizations including France and Germany. Those countries opened their borders and allowed these migrants to pour in just like Obama is now doing in the United States.

As his Presidency comes to a close, he is pushing for thousands more migrants than have already allowed to come into America before Trump gets into office because he knows Trump is going to apply common-sense and do his diligence to protect the American people. We should all have big-hearts as Americans, however we need to apply common-sense ourselves sometimes. Ask yourself…why is Obama pushing so hard to get these migrants into America, even after it has been proven that they are not assimilating into Western society? He is directly putting the American people in danger, and none of us minions (aka the American working-class) really knows what is going on here.

The attack at Ohio State University recently was a Somali migrant who is a prime example of this “migrant-crisis” directly putting the American people in danger. This insanity by the Obama administration can be demonstrated in that one case alone, and unfortunately that is far from the only case of a supposed migrant going crazy on people who do not believe in the Muslim religion. Radical Islam wants to kill every single Infidel in the world, and Obama is pouring them into the United States, a country largely made up of Infidels, as much as he possibly can before Trump takes office.

Another piece to this wide puzzle are the open borders in the United States. While Obama is giving migrants a legitimate method of entering the United States via the migrant wave, he has also left the country’s back door wide open for any and all extremists to make their way into America. Don’t think for a second that Islamic extremists are not using this massive illegal port of entry into the United States, because they are.

In an article titled “Spanish Military Report: Islamic Terrorists Operate, Raise Cash in Latin America to Attack U.S. “published in Judicial Watch December 29th, 2016, a recent statement made by the government of Spain was discussed and it paints a frightful near-future for America.  The report released by the Spanish military went into detail about how…

“Latin America is a hotbed of Islamic terrorism where groups like ISIS and Hezbollah operate freely and raise large sums of money to finance terrorist activities in other countries, mainly the United States, according to a new report released by Spain’s Defense Ministry. “Latin America represents an important region for Islamic radicalism because conditions enable the free, almost undetectable, movement of their members throughout the region,” the defense document states.” (Judicial Watch, 2016)

The article also points to another article published early in 2016, which showed direct evidence of ISIS operative attempting to sneak through the U.S. / Mexico border.

“For more than a decade the U.S. government has known that ‘Arab extremists’ are entering the country through Mexico with the assistance of smuggling network ‘cells,’ according to State Department documents obtained by Judicial Watch that reveal among them was a top Al Qaeda operative wanted by the FBI. Some Mexican smuggling networks actually specialize in providing logistical support for Arab individuals attempting to enter the United States, the government documents say. The top Al Qaeda leader in Mexico was identified in the September 2004 cable from the American consulate in Ciudad Juárez as Adnan G. El Shurkrjumah. The cable was released to Judicial Watch under the Freedom of Information Act.” (Judicial Watch, 2016)

The million dollar question here is “what is really going on?” Why is Obama flooding our country with Muslim extremists who want nothing more than to kill Americans, while at the same time ignoring intelligence reports showing ISIS intentions and how they are using the migrant wave as cover? Why is Obama leaving our country’s borders wide open, while at the same time he knows for a fact that ISIS is using that as an advantage and are sneaking their most radical of followers through the border in an effort to conspire against Americans. Why? Why are Obama and his administration flat-out lying to the American people regarding the situation in Syria and funding ISIS while calling them “rebels?” What is the strategic advantage of any of these actions?

ISIS is threatening the Western-world, and Obama is giving them a platform to do so from. He is providing them safe harbor, and funding their global operations in an effort to collapse Western society. On many occasions he has avoided blaming Islam, even when evidence clearly points to Islam as the problem. He uses language to downplay the threat to the American people, all while funding that threat and giving it route to walk on. It has become clear to the world, and the American people, that Obama is committing treason by very definition.