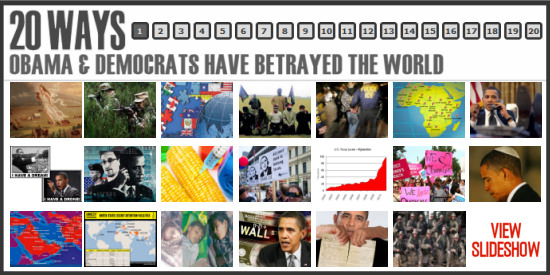 Early in Obama’s first term as President, Charles Krauthammer, a psychiatrist, made the observation that Obama was a pathological narcissist. If there was ever any doubt about that diagnosis, everything Obama is saying and doing in his final days as President will leave no doubt about it.

The behavior of Obama and Hillary supporters leading up to, and especially after the election, also leaves no doubt that you simply cannot reason with a liberal Obama or Hillary supporter. Here are just a few recent examples that confirm these two observations:

Obama went on an expensive world tour where he held a press conference in every country he visited, and then held a lengthy White House press conference when he returned with the same message. He bragged about how much safer and more stable the world is now after his eight years in office! REALLY?

In a recent interview Obama said that he advised President-elect Trump to work with Congress and avoid issuing executive orders! REALLY?

Obama publicly praised President Bush for strictly adhering to the American tradition of only having one President at the time after he left office. Obama then said he would do the same, but added “unless my accomplishments are threatened”!

Obama plans to stay in Washington after he leaves office. He has rented a 20 room Washington mansion from a wealthy liberal friend and has his staff and supporters working around the clock establishing a “shadow government” with the express purpose of opposing the Trump Presidency and continuing to push his anti-American agenda.

The Obama family takes another, one of the most expensive, vacations in presidential history. This forces many people to work during the holidays and interrupts many Hawaii resident’s holidays.

Obama announced five new major regulations at the EPA and Department of Energy. It is estimated that these new rules will cost American businesses about five billion dollars a year in compliance cost including about 350,000 man hours a year just completing paperwork.

Obama issued an executive order putting into place some of the most sweeping and restrictive drilling regulations in history.

Obama signed 231 Federal prisoner pardons and sentence commutations, a one day record..He claims these are low level drug offenders who were sentenced to harsh prison sentences unfairly due to their race. In every case I have seen where the details were made public this is absolutely not true. They were career criminals who dealt in hard drugs and even illegal guns in some cases. In addition to being non- white they all plea bargained to avoid being prosecuted for additional charges.

The Obama Administration quietly encouraged a surge in illegals with the majority allowed to stay with unrealistic court dates scheduled (for which they will most likely never show up).

Obama eliminated the “male Muslim immigrant from specific countries registry requirement” that was established after 911. This regulation has not been enforced since Obama has been in office.

The US abstained from a UN vote allowing a pro PLO anti-Israel resolution to pass, which cannot be undone.

Jill Stein was used as a “front” and given millions of dollars to try and force recounts in three states. This effort actually caused Hillary to lose votes, Trump to gain votes and uncovered voter fraud in some precincts.

Personal information about Electoral College delegates pledged to Trump, and in some cases their family member’s personal information was made public, resulting in them being barraged with letters, phone calls and emails attempting to get the delegates to NOT cast their vote for Trump. In many instances the delegate or their family members were threatened with financial or physical harm and even death.

When the recount attempts and efforts to force the Electoral College to elect Hillary failed (she actually lost more Electoral College votes than any previous candidate since 1822), the rabid Hillary supporters are now trying to determine other ways to prevent Trump from being certified or otherwise prevent him from serving as President. Efforts being publicly discussed are getting Vice President Biden, as president of the Senate to refuse to certify him or filing a wide variety of criminal complaints/ charges against him. If everything else fails their “last ditch” plan is to file so many law suits against him and his family that he cannot function as President (this actually worked against Sarah Palin when she was governor of Alaska).

New efforts to do away with the Electoral College, or find a way to avoid it are being launched in Congress and eleven states.

MTV posted an online video that was one of the most racist, un-American and disgusting videos that I have ever seen. It featured young people saying things like, “America has never been a great place unless you were an old white guy” and insulting Fox News. This is what our young people are being taught in America now?

No Washington high school has applied for a permit to march in the inaugural parade.

Major performers are not willing to participate in the Trump inauguration.

Massive boycotts and protests are being organized for inauguration day in Washington and other major cities.

In spite of the long standing tradition of Presidents getting to pick their cabinet members and department heads Senate Democrats are already planning to try and  block an unprecedented number of President elect Trump’s picks.

A Hillary supporter verbally assaulted Ivanka Trump while she was traveling in coach on a Jet Blue flight with her husband and three children. The verbal assault was so vicious and disruptive that the man, who was carrying a small child at the time, was removed from the flight before it left the gate. The man’s partner was twitting and posting on Face Book about what they were doing in advance and during the verbal assault

A New York artist saw a picture of Ivanka Trump with a piece of his art on the wall behind her and issued a public demand that she remove his art from her home.

Some famous designers have publicly stated that they will not “dress” Melania Trump.

Obama played more golf than any President in History by a substantial margin, yet some of the media criticized Trump for playing golf with Tiger Woods one afternoon this week?

Eric Trump was forced to shut down his St Jude charity foundation due to “conflict of interest” accusations. He has raised over a million dollars for St Jude with 97% of all money raised going to St Jude.

STAY TUNED FOR THE FINAL WEEKS! It is going to get much worse with each passing day!