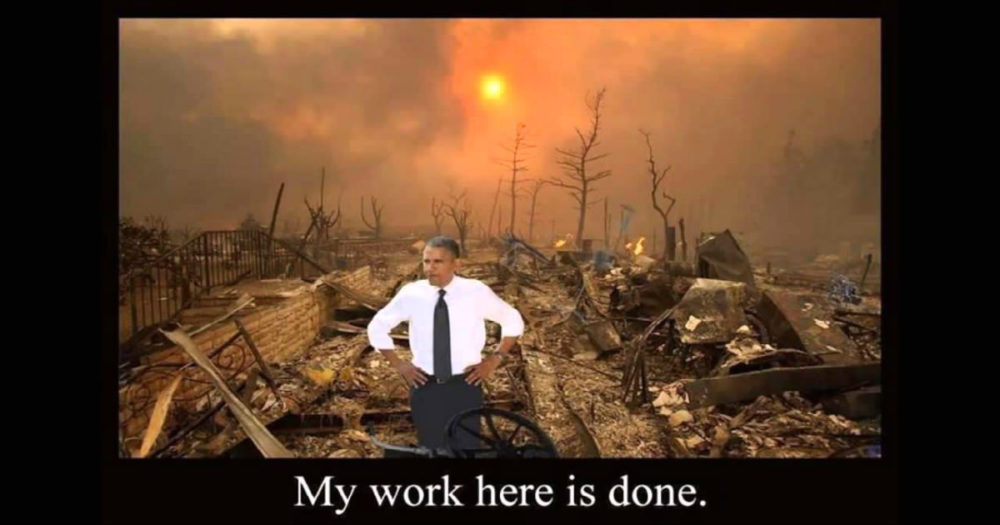 95 million people are not working of a potential workforce of 180 million – this is after we discounted college students, prisoners, mothers of children under the age of 12, lottery and Publisher Clearing House winners. 52% unemployment but Mr. Obama claims the unemployment rate is under five percent?

Mr. Obama is bragging up his two term Presidency as he leaves office and while some people believe him, we do not. According to economist James Fitzgibbon, of the Highlander Fund the public is no longer in the stock market as they no longer have money to invest. All market activity is with banks that can now trade stocks and it is done by trading computers now doing 80 percent of all trading. Robots run Wall Street. The machines have come!

Credit use has surged only because the Obama administration changed the student loans to a direct program and now counted as part of the credit card measured against actual sales showing the increase is in borrowed funds to pay for food! This is a national disgrace!

Unemployment figures are a joke. The Bureau of Labor Statistics completely changed the metrics in January 2012. None of the percentages are related to anything prior to 2012! January unemployment data are heavily adjusted for “seasonal variations.” The Obama people only show the number of people getting Federal benefits, which is about 10% of the unemployed. When it is 52% they show 5.2%!

Auto sales are another phantom figure as Obama people count all cars leaving the factory as sold, but millions are in dealers lots with some parked in fields rented to hold them. The loss of jobs has not stopped and people cannot buy cars if they do not have jobs.

Home sales are reported at 5.6 million for 2016 with foreclosures and repossessions at about one million for 2015, the last year for data, we are unsure of the housing market. It would appear to be good, but the data are not confirmed.

A more positive indicator has been our reduction of reliance on foreign oil. Oil imports peaked at more than 60 percent of U.S. consumption in 2005, but dependence declined the following year as prices increased and more expensive recovery methods could be applied here. Meanwhile, Mr. Obama joined the “green” movement to get off “fossil fuels” setting the EPA on the oil producers with onerous regulations and fines. Add to that his promise to bankrupt all coal fired power producers and miners and we had a very upset energy sector bearing a million newly unemployed persons with one man’s name on their lips.

In fairness, family incomes had been stagnant or declining for a decade before Obama’s term began as “globalization” sent manufacturing and jobs abroad. Claims of rising incomes have all vanished into the dark nights of campaign politics as “more lies!” Mr. Obama only made the trend worse.

Falling incomes and high unemployment increased poverty. Americans living below the Federal official poverty line is approaching 50 million people and this is a critical mass.

The poverty rate reached 15 percent in 2010 with disastrous results for the Democrats in the midterm elections proving once again that in spite of all the lies people do respond to their realities which likely means many now think Mr. Obama is a raving maniac fool.

In perhaps his most egregious move Mr. Obama has awarded wind and solar power great amounts of other people’s money. In return for a campaign contribution of $110,000 he award the Elon Musk organization five billion Dollars in Federal loan guarantees. This is a license to steal as Mr. Musk gets the money whether he succeeds or not. He is now classified as a billionaire by no less august a body than Forbes Magazine and he has yet to make the first dime in profit.

The total amount of electricity generated from wind and solar sources increased 116% from 2008 to 2009 while solar panel makers went broke from “free money,” the classic tale of socialism. In spite of the promise to increase home electric bills or cost on investments 1000%, say from $100 per month to $1,000, people are still installing solar panels with 30 year guarantees when the engineers know well they will only last ten, if that, but the companies selling them will be long gone. “So much for that guarantee!”

The average price of gasoline at the pump has been at historic highs most of Obama’s term, between $2 and $3, but when we factor in the $2 trillion we spent on the war in the Middle East over the last 15 years we are actually paying $15 to $17 per gallon to say nothing of the misery we have caused several million people. There must be a special place in Hell for those who lead us into these fiascos.

Household income has declined through the Obama term and there are so many different numbers we do not know which to use, but the trend has clearly been one of decline while prices have gone up. The “On Sale” hamburger we bought for 39 cents the pound in the 60’s is now $3.90 and it is not as good so many of us now eat almost nothing but chicken. It should be the national bird.

“Food Stamp” cards have really accelerated under Obama; now called the Supplemental Nutrition Assistance Program. While these programs prevent the “soup lines” of the gaunt-looking people of the Great Depression, they are no less demeaning to those having to use them. 50 million Americans are subjected to this form of Federal support, one-sixth of our population.

Mr. Obama ended the war in Iraq, pulled out leaving it to ISIS, he calls “ICIL,” a term that ignores Isreal’s existence and yet another clue he is a Muslim at heart. Then he appeared to inflate our effort in Afghanistan, but put “Rules of Engagement” on our troops such that they cannot shot back at the Taliban forces until they are fired on. In other words they get the first shot free. This make service in Afghanistan a suicide mission!

President Obama reached out to the Muslim world June 4, 2009, in a speech in which he sought “a new beginning between the United States and Muslims around the world.” Now public approval of the U.S. in Muslim nations is at all time lows according to the Pew Global Attitudes Project, down 36%. OK cat, go for it!