Obamacare: the Shiny New Car that Turned Out to be a Lemon 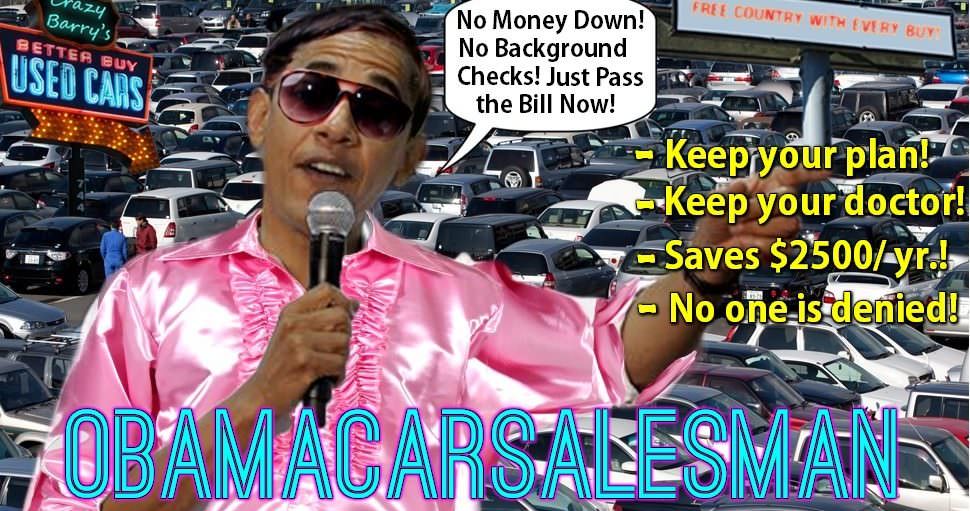 For quite a while president Obama and the democrats have lamented over the haves vs. the have-nots in America. It’s not fair that so few should have so much, while working families and the poor go without.

It’s not right that 1% can afford to purchase a new Bentley every year, while most must suffer driving an old clunker which spews out CO2 and is in constant need of repair.

Because of this disparity, the Obama administration has unveiled a new mandated government program. It is a brand new prototype automobile originally developed at Area 51. It is equipped with every known feature currently available in any and all cars and trucks today and it has absolutely zero emissions.

The administration is so exited by the development, the president signed an Executive order requiring everyone to purchase one by the year 2020.

Because of the other-worldly technology of these vehicles, no one will be allowed to own them outright. They will be leased by select companies in all 50 states who have contracted with the government to lease and maintain them.

Monthly lease payments will be paid to these “dealerships” and will range from $400 per month, up to $1500 per month. This may seem a bit much, but now everyone will have a brand new state-of-the-art vehicle.

I interviewed an individual who took deliver of his Obamacar Bronze recently to see if it was everything (and more) the administration claimed. Standing along side this beautifully designed, alien inspired car in the man’s driveway, I expected him to express his delight with the vehicle. Unfortunately he had something rather surprising and enlightening to tell me.

Practically crying, the gentleman explained to me that sure, he has a magnificent piece of technology, but he was compelled to trade in his old car. He now has the one car, which hasn’t left the driveway. First, he has been informed that his monthly lease payment of $400 is already going up to $550 and he doesn’t know how he can afford it.

“My neighbor across the street has it a little better than me,” he stated. His car is at least subsidized, so his payment is really low. “He was really exited at first, as this was the first new car he’s ever owned.” But the excitement soon wore off.

And second, even if he does find a way to swing the payments, the gas for the car is not really gas. The fuel, like the cars, was also developed at Area 51 and there are but a handful of refilling stations in his state. And the kicker is that if one can make it to a refueling station, the cost of fuel is $1000 per fill up. He did add that after 10 fill ups the cost is only $200. The dealership told me to think of the $200 as kind of a co-pay.

And to add insult to injury, the man said that many “dealerships” are struggling with the expense and headaches of maintaining the vehicles and reports already predict dealership closures in the not too distant future.

If you haven’t figured out – there is no space-car – no Obama auto-mandate (yet). This is Obamacare – where, like the car, everyone can (must) now have shiny new “health insurance.” And like the car – once you have it, you find it is too expense to utilize – with out of pocket expenses before the insurance even kicks in of up to $6000, $10000 and even more. So, like the car just sitting idle in the driveway, many who have Obamacare “health insurance” must choose to go without medical care.

And like the “dealerships,” many Obamacare exchanges created under the federal health law to provide cost-effective coverage and competition in state insurance markets are suffering. 16 of the 23 nonprofit cooperatives created nationwide have already failed.

Obamacare – the shiny new piece of crap we can’t afford to drive.