The Obama Zombies are Alinsky Fanatics 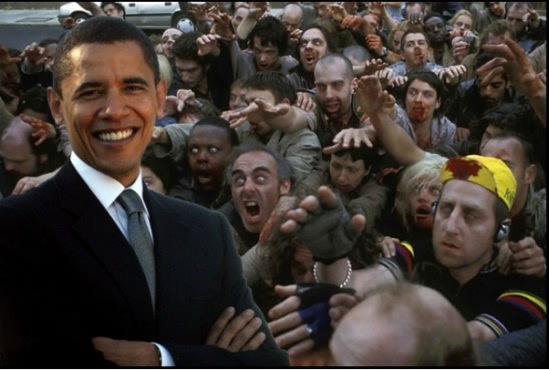 The wackos that believe that Barack Hussein Obama is a political rock star are blind to reality. It would be one thing if eccentric characteristics shaped such opinions of social outcasts, but when entire segments of the MTV population speak in a PBS lisp, the liberal popular culture has drunk the kool-aid. The zombie rage in flicks is no accident. Converting entire generations of lost souls into National Civilian Service Corps NSA informants is an effortless task, when government schooled illiterates adore Barry Soetoro. Turning a constitutional republic into a collectivist gulag is only possible, when the greater fool principle becomes the law of the land.

In spite of this, rational assessment, Obama is a commissar inspiration for commie comrades that indulge in the excesses of elitism power consolidation. The Wall Street moneychanger mentors that picked this CIA trained nobody for the assignment of nation self-annihilation, also funded the Russian Revolution and underwrote the Nazi Third Reich. Therefore, it should surprise no one educated in unfeigned factual history that the target of the last obstacle of globalist control, the residual defiance within the United States of America, is Obama’s assignment.

A good primer to understand the psyops disinformation career of the tutored revolutionary student is the video, Know Saul Alinsky and you Know Barack Obama and his Regime.

For all the unfortunate activists who missed the joy, intensity and exhilaration of street demonstration and Chicago police brutality of the 1968 Democratic convention, just remember that Alinsky, a committed Communist dedicated the forward of his book, Rules for Radicals to Lucifer. A little ironic, just recall those satanic images from the History Channel’s hit series ‘The Bible‘. Now ask which Alinsky pupil most fits the portrait?

Below is Appendix E from Matthew Vadum’s book, Subversion Inc.: How Obama’s ACORN Red Shirts are Still Terrorizing and Ripping Off American Taxpayers.

Contrary to popular belief, Saul Alinsky did not state only 13 rules in his seminal community organizing work, Rules for Radicals. He had 24 rules.

Saul Alinsky describes 24 rules in Rules for Radicals. Of those 24 rules, 13 are rules of “power tactics”:

The remaining 11 rules Alinsky describes are concerned with “the ethics of means and ends”:

If you come to appreciate the utter disregard of moral principles and ethical values, the Machiavelli manifestation of the habitual lies out of the Obama administration, stands as sound demonic practices.

John Fund elaborates in Still the Alinsky Playbook, on this theme.

“Alinsky argued for moral relativism in fighting the establishment: “In war the end justifies almost any means. . . . The practical revolutionary will understand [that] in action, one does not always enjoy the luxury of a decision that is consistent both with one’s individual conscience and the good of mankind.

Where did Alinsky get this amorality? Clues can be found in a Playboy magazine interview he gave in 1972, just before his death.

Alinsky recalled that he “learned a hell of a lot about the uses and abuses of power from the mob,” and that he applied that knowledge “later on, when I was organizing.” The Playboy interviewer asked, “Didn’t you have any compunction about consorting with — if not actually assisting — murderers?” Alinsky replied: “None at all, since there was nothing I could do to stop them from murdering. . . . I was a nonparticipating observer in their professional activities, although I joined their social life of food, drink, and women. Boy, I sure participated in that side of things — it was heaven.”

Thus, when Obama sets loose ACORN affiliates to do the dirty work in electoral campaigns, he is just following Alinsky’s deceit model. Let the hip-hop in the street urbanity video RULES FOR RADICALS – Obama’s Bible and Saul Alinsky, explain further.

“What exactly are the connections between Obama and Saul Alinsky’s thought? In 1985, the 24-year-old Obama answered a want ad from the Calumet Community Religious Conference, run by Alinsky’s Chicago disciples. Obama was profoundly influenced by his years as a community organizer in Chicago, even if he ultimately rejected Alinsky’s disdain for electoral politics and, like Hillary Clinton, chose to work within the system. “Obama embraced many of Alinsky’s tactics and recently said his years as an organizer gave him the best education of his life,” wrote Peter Slevin of the Washington Post in 2007. That same year, The New Republic’s Ryan Lizza found Obama still “at home talking Alinskian jargon about ‘agitation’” and fondly recalling organizing workshops where he had learned Alinsky concepts such as “being predisposed to other people’s power.”

In The Rule for Radicals that Alinsky Skipped, author J. Robert Smith analyses the destructive results of believing in your own supremacy. Not that much difference from old Serpent’s rebellion.

“For Mr. Obama and his Alinsky fellows, it’s one thing to sport a mask to gull voters and whoever else needs gulling; it’s another thing to get caught up in the web of your own lies.

Barack Obama has fallen prey to his own and his handlers’ propaganda; to wit, that he’s a Nubian sun god come to earth to minister to the little people. His reasoning and decisions are as unerring as a pope’s (ex cathedra might be inadequate to describe Barack’s authority, though, since it originates with himself and not the office). The president was cocooned and nurtured by race-based preferences from his adolescence on. He came to adulthood primed for hubris. And hubris — well, hoary hubris, it may finally be a-coming for Barack.”

It is crucial to put into proper perspective that Obama has coordinated political chaos, works to the advantage of the establishment elites, who benefit from the final obliteration of free market enterprise. Totalitarian governance hinges upon the dependence of zombie dupes, who follow their fearless leader into hell, as an obedient pledge of submission. Obama is the servant of the globalist creed and the revolutionary policies that his minions are implementing directly further the strangle hold over the economy.

The Corporatism Fascist merging with the Tyrannous State is the terminal objective that will cause the New World Order to complete its ultimate goal. Alinsky‘s spirit hovering over the satanic disciple of darkness, is the Obama credo. Obama-mania followers are a flock of fools.

Check Out More at BATR.org.