The Obama Years are Finally Drawing to an End 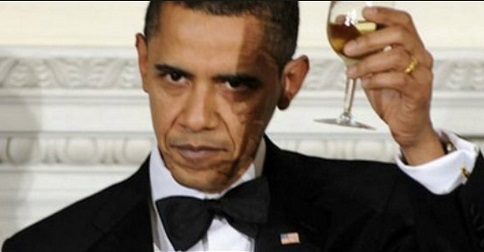 Are the Obama years finally near an end. Or will he come up with something that will enable him to declare a “NATIONAL EMERGENCY”? Good gosh, let us hope not! We all know that would keep him in the White House forever. The ’emergency’ can only be ended by Presidential order!

With that in mind, let’s examine the past seven and one half (7 1/2) years of the Obama presidency.

Our currently sitting President spends valuable time, paid for by the U.S. taxpayers, apologizing for America, playing golf, ignoring the ISIS threat, and allowing Muslims to enter the Country by the thousands. Meanwhile his wife takes very expensive vacations, and in between those she is very busy making up the much-questioned school lunch menu for our children.

The Unions have been allowed to take advantage of the American labor force, abused their freedoms and rights, and financially raped the small business owners, and some corporations. They have decimated our economy in their outrageous demands. Some companies have moved to other Nations, and some have had to declare bankruptcy.

Credit card companies and banks have gone viral with promises and promotions to suck us in. Driving the American public to get heavily in debt just to have the latest of everything.

Cell phone companies and automobile manufacturers are putting so much in their products to prevent accidents and injury, that the price has gone through the roof. I hear many drivers complain there is so much technology they don’t use half of it.

Between the banks, the Government, and the Unions we have been convinced that we must have mega technology, pristine food, safe automobiles, home security systems, schools and churches locked all the time, and on and on.

In response I say we do not need mega technology; we have lost the ability to talk face to face. We have forgotten how to spell and write (texting is the new communicator). Our food has so many preservatives added, and so much good taste taken out, that we can no longer experience the joy of eating a good hearty meal.

And the microwave has changed our cooking practices. Now the food comes out dry of the good moisture that added to the products good taste. Fat is removed. (wasn’t fat the item that added salt and tasty flavor?) And the microwave can melt the plastic into your food killing the taste and maybe you.

The Government regulations claim to add safety and security to our lives, healthy eating habits, leisurely time to enjoy sitting on the sofa watching TV, playing video games, and take part in many other healthy and enjoyable activities. Do they really??

Meanwhile, we the people have had to endure higher taxes to support the needs and habits of our officials and their money-spending lobbyists. Perhaps we should consider boycotting the companies and organizations that have a lobby in Washington D.C. When you give it some real in-depth thought, is it not the lobbying bloc that drives Congress to enact certain laws that will only add to their cause.

Years from now, Historians may regard the election of Barack Obama for two terms as an inscrutable and disturbing phenomenon. How, they will ponder, did a man so devoid of professional accomplishment beguile so many into thinking he could manage the World’s largest economy, direct the World’s most powerful military, and execute the World’s most consequential job. His pre-Presidential life consisted of a questionable life in Kenya with his American-born mother (who has been described as a ’60’s free spirit), and step-father (a Kenyan citizen), wherein he was raised in the Muslim tradition. Then shipped off to the United States to be raised by his grandparents, who have been described as very Liberal, and his mentor, who also has been described as an ultra-Liberal. He was ushered into an Ivy League school despite unremarkable grades and test scores, and was given a cushy non-job as a “community organizer” in Chicago; a brief career as a State Legislator in Illinois, and was devoid of any legislative achievement. Then elected to an unaccomplished single term in the United States Senate, the entirety of which was devoted to his presidential ambitions. He left no academic legacy in Academia, authored no signature legislation as a National Legislator, and all Academic records have since been sealed from that point.

Does anyone wonder, I ask, why we the Electorate, have been so disillusioned by the past ten years of our existence under the leadership that we now have in Government.

Is it any wonder that many, many have decided to support a non-politician for the highest office in the Land; to support a man accustomed to negotiating deals with other Businessmen; and not the sophisticated, diplomatic and politically correct smooth talking hypocrites that we have become accustomed to.

What choices do we have now? A previous First Lady, Senator, Lawyer who was also given the responsibility of Secretary of State, and through it all, nothing of any grand heights of accomplishment. Although she has been embroiled in many questionable decisions and unethical practices.

We also have her opponent; a former Brooklyn, NY resident who relocated to the Northeast, and changed his political associations each time he attempted to gain an elected office.
On the other side of the aisle we had a slate (or should I say slew) of politically experienced Senators who spouted the usual political nonsense. They bragged about what they have accomplished, and promised all the wonderful things they were going to do for us. When you examine it closer, one would think they were all reading from the same playbook.

Within this array, stepped up the loud, “cheer-leading” type of Businessman, that I spoke of earlier. He was like a football coach hyping up his team. He really got the people going.

Now here we are at the crossroads. This coming National Election, we must choose between the Lady with the questionable demeanor on the Left; and the brash, boisterous “get-it-done” guy on the right.

Who do you think will get the nod from the American people?