Obama says the USA is “More Respected” in the World because of Him! 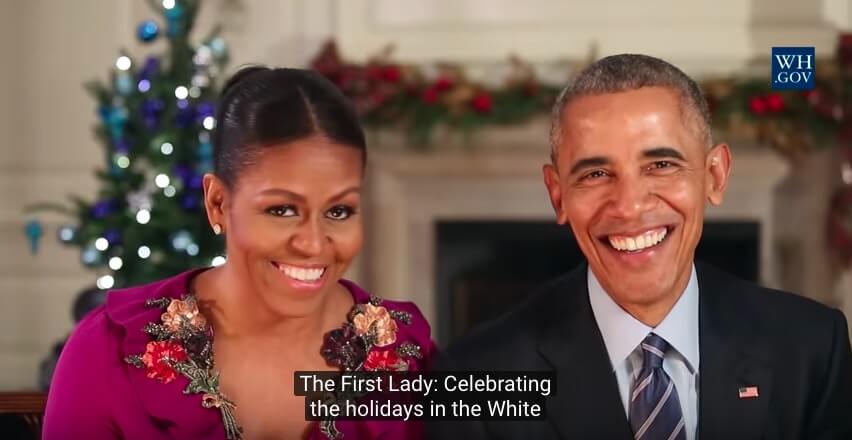 The President is crazy.

That is the only possible conclusion one can reasonably come to after hearing what he had to say in his most recent weekly address.

He actually tries to sell the story that America is “more respected” around the world today than we were eight years ago… and it’s all because of his leadership.

I kid you not.

President Barack Obama: Merry Christmas everybody! One of the best parts of the holiday season is spending time with the special people in your life. And for me, that means getting some help from my best friend for our annual Christmas Weekly Address.

Michelle Obama: Given how our first Christmas Weekly Address went, I realized that Barack needed all the help he could get. Celebrating the holidays in the White House over these past eight years has been a true privilege. We’ve been able to welcome over half a million guests… our outstanding pastry chefs have baked 200,000 holiday cookies… and Barack has treated the American people to countless dad jokes.

President Barack Obama: Although a few got a…Frosty reception.

Michelle Obama: This year’s White House holiday theme is “The Gift of the Holidays,” and our decorations reflect some of our greatest gifts as a nation: from our incredible military families, to the life-changing impact of a great education.

President Barack Obama: And the greatest gift that Michelle and I have received over the last eight years has been the honor of serving as your President and First Lady. Together, we fought our way back from the worst recession in 80 years, and got unemployment to a nine-year low. We secured health insurance for another twenty million Americans, and new protections for folks who already had insurance. We made America more respected around the world, took on the mantle of leadership in the fight to protect this planet for our kids, and much, much more.

By so many measures, our country is stronger and more prosperous than it was when we first got here. And I’m hopeful we’ll build on the progress we’ve made in the years to come.

Tomorrow, for the final time as the First Family, we will join our fellow Christians around the world to rejoice in the birth of our Savior. And as we retell His story from that Holy Night, we’ll also remember His eternal message, one of boundless love, compassion and hope.

Michelle Obama: The idea that we are our brother’s keeper and our sister’s keeper. That we should treat others as we would want to be treated. And that we care for the sick… feed the hungry… and welcome the stranger… no matter where they come from, or how they practice their faith.

President Barack Obama: Those are values that help guide not just my family’s Christian faith, but that of Jewish Americans, and Muslim Americans; nonbelievers and Americans of all backgrounds. And no one better embodies that spirit of service than the men and women who wear our country’s uniform and their families.

Michelle Obama: As always, many of our troops are far from home this time of year, and their families are serving and sacrificing right along with them. Their courage and dedication allow the rest of us to enjoy this season. That’s why we’ve tried to serve them as well as they’ve served this country. Go to JoiningForces.gov to see how you can honor and support the service members, veterans and military families in your community – not just during the holidays, but all year round.

President Barack Obama: So as we look forward to the New Year, let’s resolve to recommit ourselves to the values we share. And on behalf of the all the Obamas – Michelle, Malia, Sasha, Bo, and that troublemaker Sunny – Merry Christmas, everybody.

Michelle Obama: And we wish you and your family a happy and healthy 2017… thanks, and God bless.