Obama Repeats, it is NOT Terrorism! 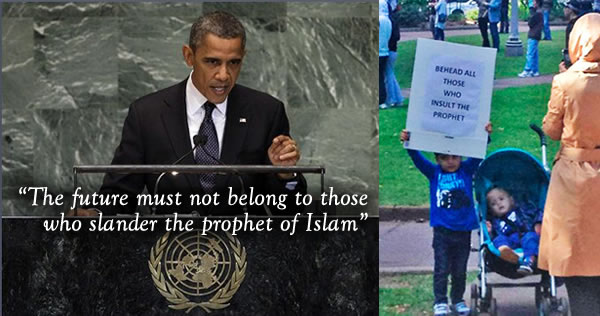 Well, that is if you are the President or any of his liberal followers. Though one hears over and over that these huge number of murders are done with the killer singing out Allah Akbar as they either go to their death or before they start their shooting.

So if this is not Islamic Terrorist, then why are they of the Muslim faith, scream their God’s name, and kill groups like LGBT, or the infidels? Is this all just random coincidence? I believe not.  Then if this is so, the Liberals and President Obama must also rid their vocabulary of hate crime, racist crime, and bigotry. We do not want to upset or embolden these groups to do more killings. It cannot be both.

We hear it is the easy purchase of guns, so then we must figure a way to handcuff guns to their owners, and not allow guns out of their owner’s eyesight, so laws need to be changed to allow the open carrying of guns, and ammunition at all times by legally owned guns by law abiding citizens.

Omar Mir Siddique Matteen (29) has been identified by police authorities in Orlando, Florida, as the shooter responsible for killing at least 49 people at a gay nightclub during the pre-dawn hours. The divorced Muslim father of one child, who was born in New York of parents from Afghanistan, was armed with a pistol and what has been described as an “AR-15” style weapon. Some reports suggest that he was also wearing an explosive device. U.S. Senator Bill Nelson (D-FL) said that the Islamic State has claimed responsibility for the incident. “There appears to be some connection to Islamic radicalism,” he said at a command center in Orlando.

Imagine that, not only did the shooter in Orlando have connections to Islamic radicalism but also had the standard murder paraphernalia used by these terrorists. He was also a Democrat. Wow, what do you say President Obama?

We still see thousands of Syrians coming to America on this wonderfully ignorant plan by Obama to make it even easier for terrorism. What would any sane, intellectual want with adding more controversy and chance of terrorism as to introduce thousands of unvetted completely those from the middle east in areas that have promised the killing of Americans? I have one thing to say fool.

A shooting attack on Fort Hood; 3 killed, 16 injured; in addition the gunman killed himself, and all information pointed to Radical Islamic terrorism. Chattanooga, Tennessee a gunman killed 4 Marines and injures 1 Navy sailor (who died of injuries), 1 police officer, and 1 Marine, at two locations; the gunman was shot and killed by police. San Bernardino, CA. two attackers killed 14 and injured 21 at a county employee meeting and Christmas party; both attackers were killed hours later in a shootout with police in which 2 police officers were injured. Columbus, OH attacker injures 4 in a machete attack at a restaurant; attacker was shot and killed by police when he attacked police at the end of a car chase. Now can someone please tell me how any sane person would blame this on a gun when every one of these incidents was Islamic Terrorism, and all starting in April of 2014 after our current President was elected for his second term. Now this gives anyone the ability to be a realist, and see that being weak on terrorism around the world, unwilling to call it what it is, and not willing to make it harder to immigrate to America if you are from a terrorist state equals murder, mayhem and death by Islamic Terrorist as has been shown.

All Americans who accept these incidents as coinkydinks needs to stop trying to call racism and bigotry in shootings and murderers, and no longer consider that any crime is more hate filled than another. If you are a realist and understand that some people are just hate filled, and ready to kill, and today, it is Radical Islamist, then you understand that any type of murder and terrorism is wrong, but can never be blamed on an inanimate object, only the person or persons doing the act.