Obama and His Muslim Legacy 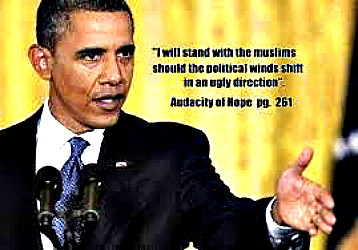 There is much confusion about the policies and direction of the Obama presidency.  Pundits and politicians alike flounder when trying to explain the actions of President Obama. The reason for this confusion and misunderstanding is the lack of courage to identify and integrate the unmistaken evidence of what they are dealing with.

The recent  defense of Islam at the prayer breakfast was a central clue to what is going on in Obama’s mind.  Searching for some way to downplay the role of other religions and therefore equivocate atrocities performed today with those of other religions in the past can only be described as evasion of context.  Denying the words Islamist terrorists and constantly referring to Islam as a religion of peace only confirms his basic premise that translates into action to promote Islam consistently and almost openly.  When you look at the words of the Koran and Obama’s actions you see a pattern that cannot be misinterpreted.

First take the Islamic tenet that lying to promote Islam is perfectly acceptable.  This includes such practices as evading and distorting. We know the man is a liar from his claims on healthcare, his shovel ready jobs and “ You didn’t build that”.  Why would we accept that he was truthful when he swore to defend the Constitution. That has been an obvious lie.

Now consider that what if a man with Muslim proclivities decides that his contribution to Muslim dominance can best be served by using his oratorial talents to become President of the United States and then undermine the county with weak leadership, massive debt and doing all that he can to diminish America and her defenses?  Could not a person’s intent on Muslim dominance accomplish this mission to some extent?  It was pointed out by Laura Ingram that Obama seems well qualified to accomplish what he wants to accomplish and she pointed to his elections, his free college program, his stimulus , etc.  But when it comes to dealing with ISIS he seems feckless.  Is this because he doesn’t know what to do or is it because his agenda is far different than an American President who would want to protect and promote the American Dream?

President Obama seems to have little interest in his legacy as an American President.  No one would want their country to become more mediocre, weak, and debt ridden if they had a spark of rationality in them.  Yet these destructive avenues keep being advocated and reflect only a mission to boost Muslim stature and diminish America.  His foreign apologist speeches can only point to such a mission.

In Obama’s mind where he displays many of the attributes identified by Patai in his book ,” The Arab Mind”, we see the notion that speech is more potent than action, lying to promote Islam is perfectly acceptable and a central drive to avoid denouncing Islam is evident by the weak leadership regarding national defense.  Releasing terrorist leaders and attempting to close Gitmo also fit with the overall objective of a Muslim legacy.

At the end of his term of office he will be able to say to his Islamic cohorts, “ See what I have done to promote your case and diminish the power and stature of the nation of infidels as asked by the Prophet. Such a legacy will sit well with the Muslims who will see a path to dominance they had not envisioned. Infiltration will be the strategy of the Muslim future and although simple bombing will continue, infiltration into the institutions and government will play a major part.  Identifying and challenging this invasion will require more than simple vigilance.  A lock step party will only accelerate the invasion as we have already seen.  If no one is willing to identify this mission for what it is America will be degraded to the status the Muslim religion seeks.  The land of the free without the home of the brave will cease to exist.