Obama to Hillary: Under the Bus You Go 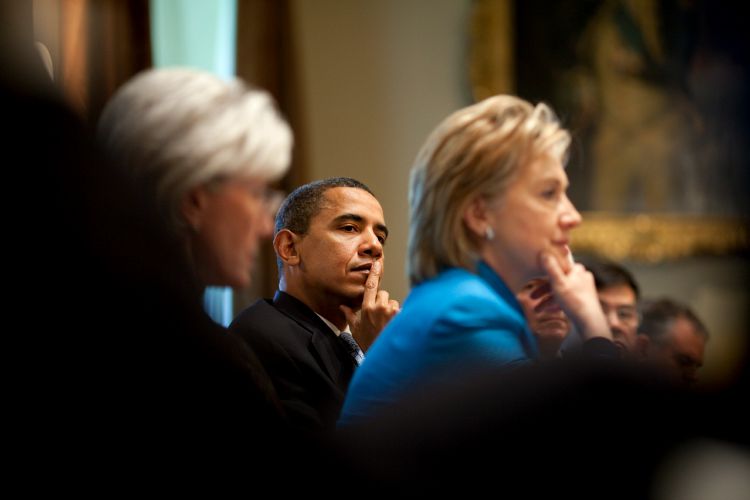 Barack Obama and Hillary Clinton are standing on a street corner waiting for a bus. As the bus approaches, Obama grabs Hillary and tosses her out on to the street, where she is then run over by the oncoming bus.

Of course this would never happen – literally. Neither Obama nor Clinton would ever be caught dead on a bus. Under it – yes, but not in one.

Naturally I’m kidding about Barack tossing Hillary under the bus. He has not the strength to do so. Again – kidding. These are the jokes. I’m here all night.

But seriously – it does appear that Obama has figuratively thrown her highness under the bus, again, for her ever-growing email scandal. I say again, for this isn’t the first time the president has done so.

In 2015, when asked about Hillary’s private server, Obama stated, “The policy of my administration is to encourage transparency, which is why my emails, the Blackberry I carry around, all those records are available and archived.” Translation – I don’t know she has been doing, but I follow the law.

It’s common knowledge of the disdain the Obamas have for the Clintons, and vice versa. As far out radical as Obama is, I don’t think he’s a crook – or if he is, he is better at hiding it. Obama doesn’t appear to have sold the White House to highest bidder the way Hillary did at State – or selling naked options on her potential to become president.

At this point it seems Barack is probably tiring of constantly having to defend a woman he really can’t stand, which is why, in my estimation, he is once again hanging her out to dry.

Just yesterday, White House spokes-punk Josh Earnest said that the White House stood by FBI Director James Comey on Monday as a man of ‘integrity’ and ‘principle’ in the face of a Democrat-led assault on his character and intentions. This is a major blow to Clinton – one I’m sure she is furious over.

The Daily Mail reports  Earnest stated at a daily briefing that, “The president’s assessment of his [Comey] integrity and his character has not changed. The president doesn’t believe he’s secretly strategizing to benefit one candidate or one political party.” This, despite attacks on Comey’s character by Clinton, her surrogates, and now “Dirty” Harry Reid.

In a rather surprising turn, Earnest even defended President George W. Bush for his selection of Comey. This is highly unusual, as it is this White House’s historic M.O. to blame Bush for literally everything.

I don’t know why the White House seems to be separating itself from the Clinton camp. If I had to guess, beyond the hatred factor, I’d say that Obama has calculated that at this point, his legacy is far more important that a president Hillary and he does not wish to be forever connected to the scandal-ridden candidate. It’s probably a fair calculation. That and maybe by favoring Comey in this war, he might himself purchase some good will to keep his involvement under wraps.