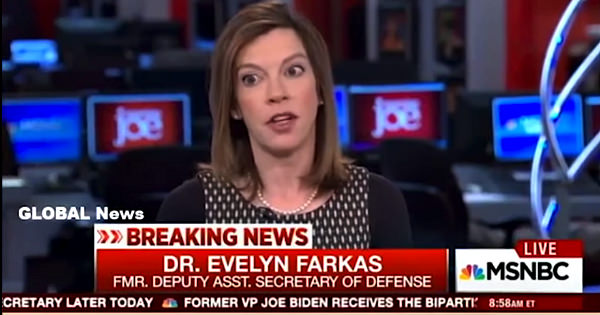 This is a bombshell folks, so don’t expect to see anything about it in the mainstream media.

During an appearance on MSNBC’s Morning Joe Dr. Evelyn Farkas admitted that the Obama administration was behind the collection of data on the Trump team, they were also responsible for disseminating that data as far and wide as they could.

While discussing the mad scramble by the Obama administration to collect and preserve intelligence on alleged Russian election hacking before Obama left office, it appears that Farkas accidentally implicated the Obama White House in the surveillance of Trump’s campaign staff.

The Trump folks, if they found out how we knew what we knew about the Trump staff dealing with Russians, that they would try to compromise those sources and methods, meaning we would not longer have access to that intelligence.

Furthermore, Farkas effectively corroborated a New York Times article from early March which cited “Former American officials” as their anonymous source regarding efforts to leak this surveillance on the Trump team to Democrats across Washington DC.

I became very worried because not enough was coming out into the open and I knew that there was more. We have very good intelligence on Russia. So then I had talked to some of my former colleagues and I knew they were trying to also get information to the hill.

That’s why you have the leaking.

In other words; the Obama administration was concerned about spoliation of evidence gathered through various “sources and methods” of surveillance, so a plan was hatched to leak this information to congress – also known as “The Hill.”