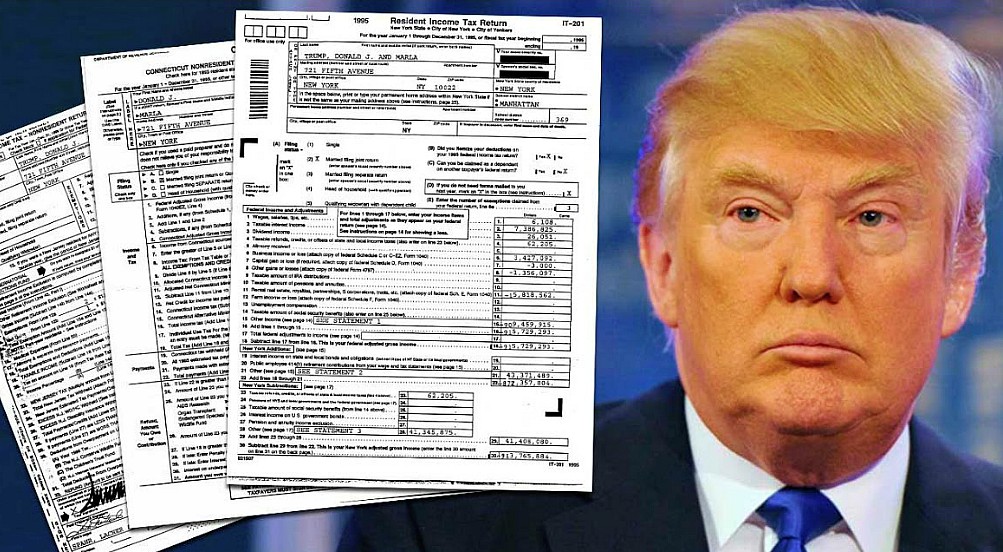 The New York Times is the liberal rag of record.  They illegally published Trump’s tax returns to smear and slander his business dealings to their illiterate minions.  What could a Democrat understand of a billionaire’s tax returns when they can’t understand their own 1040EZ?  The true take away from Trump’s returns is that he never did anything illegal to become a billionaire and is supremely talented in business.  This is the kind of man America needs running the economy and it has paid off in a boom Democrats could never create!  When Democrats run the economy it always goes into decline.  Let all members of Congress release their tax returns to show how they got rich on their salaries working in government!

Democrats hold the truth and law in complete contempt.  A Democrat state representative went to a Planned Parenthood protest by Christians against abortion to publicly harass, humiliate, and shame them by declaring they were doing so to women considering abortion.  The video he shot shows that the only person doing the harassing, humiliating, and shaming was himself.  This is a typical warped liberal mentality believing their own lies to justify their own hateful actions.  It’s the same as Antifa who delude themselves into believing they are fighting fascists while acting like fascists.

Reprehensible Democrats are what they accuse Republicans of being

Congressional Democrats are threatening to hold AG Barr in Contempt of Congress for not breaking the law to provide them with Mueller’s complete records of his investigation.  They are incensed at Mueller not declaring that President Trump is guilty of colluding with Russia to steal the election or obstructing justice.  Mueller knew from the start, as do all Democrats, that the Russia hacking of the election is a fake story that the Democrats created.  They know that Trump obstructed nothing, yet like pied pipers, they continue to play the tune of Trump’s guilt to their lemmings.  All they are striving to do is to overthrow the duly constituted elected president and lead their foolish followers off the cliff into their desired socialist dictatorship.

Democrats have no basis to hold Barr in contempt.  Their demand is that he violate the law by exposing unlawful material to them about President Trump.  This is opposite of when Republicans held Obama’s AG Eric “Wingman” Holder in contempt for not testifying about his “Operation Fast & Furious” in which he sold American guns to Mexican drug cartels.  Obama illegally extended Executive Privilege to Holder in contempt of Republicans.  This clearly indicates that Obama was up to his neck in the scandal trying to cover it up.  This is no surprise as a deep investigation of Obama would reveal that he funded the Muslim Brotherhood’s formation of the Islamic State revolution to overthrow Middle Eastern government in an effort to re-establish the Caliphate.

Leftist Democrats don’t seek to uphold the law but break every law from immigration to taxation to voter registration.  Their efforts to overthrow Trump by impeaching him when he has committed no crimes throughout his life is their revenge for the impeachment of Clinton and holding Holder in contempt for their violations of the law.  Everything for which they stand is based on their lies.  They say Clinton was impeached for having sex in the Oval Office with an intern when he was actually impeached for lying under oath and witness tampering.  Like Holder, he is irrefutably guilty while Trump and Barr are as guiltless as any innocent black man railroaded by rednecks.  President Trump would be entirely justified in invoking Executive Privilege over the entire Mueller investigation since it was all about him.

The Democrat plan to overthrow the president and anoint Hillary to continue Obama’s destruction of the United States is the long game.  Retaking the House through massive voter fraud in blue states where they allowed criminals and illegal aliens to vote using provisional ballots that were then mixed in with legal ballots was the first step.  Ousting Trump and Pence to install Pelosi would be step two.  Pelosi choosing Hillary as VP then stepping down would be the last step.  Hillary would then persecute Republicans and do away with elections giving Democrats absolute power to choose themselves as presidents to make America into a communist oligarchy like China.  Then only those who kiss their royal ring would be permitted to do business and prosper.

Democrats have been fooling the people for over a century.  From their tax the rich class warfare breeding greed and envy to their racism to oppress blacks on their plantation by fostering racism in blacks against whites, to their climate change scam to dupe ignorant liberals into believing that they are scientists.  Everything Democrats do is contrary to Americanism, which is why they persecute patriots and Christians.  They impose their irrational backward thinking on young skulls full of mush to indoctrinate them into their ideology rather than educate them, while simultaneously duping them into believing they are thinking for themselves.  If Americans want to go back to decline under Obamaism they need only endorse criminals and foreign Latino-communists along with Islamo-Nazis to overthrow the Constitution.  Once America begins adopting Sharia over constitutional law then America will join the rest of the dark world.

A perfect example of ignorant liberal thinking that they arrogantly try to project onto conservatives is a line from the greatest American comedy series:

“That’s the great thing about science.  We all get to have our own opinions.” – Dr. Pemberton, The Big Bang Theory: s12 e21

Leftist politics is all that guides Democrats to use schools to indoctrinate rather than educate, use media to propagandize rather than inform, and use government to persecute rather than protect.