Now Charlottesville, VA: Americans Own What Their Great Grandparents Worked For 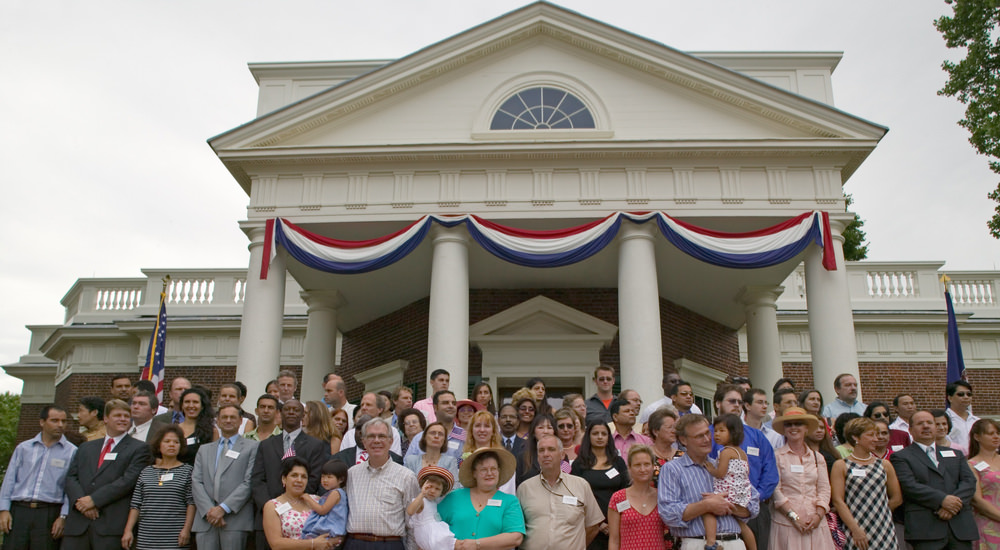 As Americans we own what we work for.

It’s been that way from the beginning, confirmed July 4, 1776, when a working team of Americans declared the United States free from British rule.

Over and over again without using the words own or ownership its signers attested to an individual’s, a local government’s, a state’s, and a nation’s right to govern and dispose of what they considered theirs without interference by outside agents.

Yes. Local governments, states, and our federal government have rights to exercise in similar fashion to the rights exercised by individual citizens of the United States. We often speak of the powers of government at its various levels, but rarely if ever think of their rights. Americans, leery of powers; prideful of rights took great pains in the writing of the US Constitution to balance powers against each other. We don’t expect, look for, or welcome outside forces limiting or balancing our rights. Our rights are considered “self-governing.”

Rights should be self-governing. Who else knows what the individual values, holds dear? It’s the self-governing aspect of our rights, holding them dear, that gives us the sense we own our rights. Property is what we think of in terms of owning something, tangible, capital objects: land, buildings, inventory, household items, cars, boats, planes, and bank accounts. We own so much more, especially as Americans, not so much as global citizens since they are ashamed of what they own, feel it was taken from someone else. As Americans we own our hours, days, weekends, months, and years. We can spend them much like cash, barter them. We can devote minutes, hours, days, months, and years to ideas, ideas we also own. Of course Michael Moore considers those invaluable ideas: “national treasures.” His contra-Adam Smith idea not withstanding, Americans own their ideas.

Americans also treasure their heritage, their families, and their faith. Such items, the same as with things, are bequeathed from generation to generation. Not everyone shares the same heritage. The heritage of families of the South is different from families of the North, possibly of the West; a potent reason why individuals, local governments, and states should be raising holy hell when agents foreign to their interests (ACLU, SPLC, and others) take towns and states to court to disenfranchise them of monuments and flags, symbols of value inherited from their forebears.

In the language of The Declaration of Independence there is more than one way to “dissolve Representatives Houses repeatedly” to the effect of taking an American’s inheritance. That phrase was a complaint sent to King George III. A new Declaration of Independence might be addressed to the courts, in particular to the US Supreme Court at 1 First Street, NE. Washington, DC that is. The applicable argument paraphrased from the Declaration: “By taking our flag of the Confederacy you have in effect dissolved our statehouse, repeatedly; making their duly legislated decisions of no effect.” This can apply to the removal of monuments of Jefferson Davis and General Robert E Lee also.

Perhaps the US Supreme Court has not made such a momentous decision yet, but interests foreign (ACLU, SPLC) to local and state governments are funded extremely well, making the prospect of defending the symbols and monuments so very expensive for towns and states forced to repeatedly fight off these court bound takings. Instead of “taking up arms” to defend their rich, highly valued heritage, that which was willed to them, that which was earned the old fashioned way through blood, sweat, and tears of great great grandparents; as often as not towns and states shrug their shoulders and allow the taking.

If the ACLU were to sneak into a house to steal a Confederate flag; whether hanging on a wall or tucked away in a dresser drawer, we all know a homeowner would reserve the right to protect such property from being taken. Let’s add the feature the flag was his great, great, great grandfather’s carried high in a strategic battle of the Civil War. The value of the threadbare flag to the homeowner in his own eyes would grow exponentially immense. But the thief, the ACLU, even if they knew the personal significance of the flag to the homeowner would not care a bit. For he is not the owner of the flag, proprietor it’s heritage.

Listen to the founders and apply their grievances sent to King George to grievances some of us might send to the US Supreme Court or the deep state today:

For transporting us beyond Seas to be tried for pretended offences: Americans today while defending their heritage are charged with pretend offenses of racism, bigotry, xenophobia, homophobia, and white supremacy; all accusations concocted in some strange la la land beyond the Seas.

For abolishing the free System of English Laws in a neighbouring Province, establishing therein an Arbitrary government: Sanctuary cities where law enforcement is curtailed and no one knows what the next law is that can be broken without consequence.

…And enlarging its (sanctuary cities) Boundaries so as to render it at once an example and fit instrument for introducing the same absolute rule into these colonies: What those protecting illegal immigrant felons want is for the same arbitrary enforcement of laws to be extended across the country.

For taking away our Charters, abolishing our most valuable Laws, and altering fundamentally the Forms of our Governments: Again the US Supreme Court has repeatedly rewritten out of existence several essential unalienable rights contained in the Bill of Rights without obtaining 2/3 approval of both houses of Congress or ratification by 3/4ths of the states. That is not only abuse of power but theft of what Americans own as individuals, towns, cities, and states.

He is at this time (Obama was until January 20, 2017,) transporting large Armies of foreign Mercenaries to compleat the works of death, desolation and tyranny, already begun with circumstances of Cruelty & perfidy scarcely paralleled in the most barbarous ages, and totally unworthy the Head of a civilized nation: What do we call providing unhampered opportunity for ISIS barbarity to accompany Syrian refugees into the United States, those who drown victims in metal cages, burn others, and behead the remainder?

Don’t we suspect, if Hillary Clinton had been elected President, one of her first pen and phone acts would have been to order all calendars turned back to 617AD, back past, way past a later barbaric era Prime Minister Netanyahu said the United States and the world should also avoid, medieval feudalism?

Americans inherited much better than either of those horrendous periods in world history, both so antithetical to what it is to be an American.

The Declaration of Independence is an important reminder of that, at least from this time traveler’s perspective.

This article titled as: American Individuals, Towns, Cities, and States Own Their Heritage and What They Work For was first published at TimeTravelPundit.com on July 8, 2017.