If Not Virtue then Vice 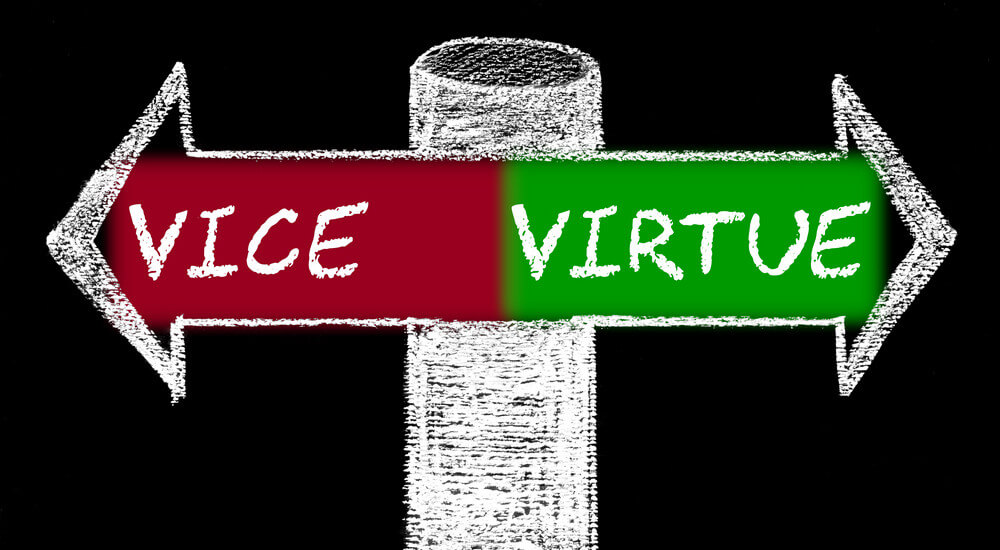 Virtue is the sum of all that is good, and is the quintessential attribute of our nature. Courage, faith, hope, charity, fortitude, chastity, kindness, temperance, humility, justice, prudence, diligence and patience, are the Cardinal, Heavenly and Theological Virtues. Virtue can best be defined as moral excellence, an effective force or power. The question is what is its significance, if any, in America today?

America has come a long way in its 240 year history. Since its founding countless people from all over the world have made the perilous journey across the seas and emigrated from their homelands seeking a better life for themselves and their families, while others sought refuge or asylum from hostile regimes or oppressive environments, and all looking to America as their best hope for a safe and prosperous future. This stream of humanity, people of all creeds, colors, and nationalities, has continued unabated over the last two centuries.

Together we’ve seen great invention and technological advancement, a better life for most. But such progress does not come without a price; human folly, an absence of virtue and its repercussions; war, civil strife, poverty, ignorance, and what at times seems unending conflict of one sort or another. Yes we have transgressed and made mistakes, we are not perfect beings, but we are also a generous and compassionate people with unwavering faith, and in most cases respect and tolerance for the rights and dignity of others.

Since its inception America has gone through a transformation, and mostly for the good. But over the last 60 years something has changed in the American ethos. Some say it’s a manifestation of a weak and misguided people that have succumbed to a decadent and apathetic culture. That we have become recalcitrant toward faith and virtue, yielding to overwhelming desires and overpowering extraneous forces. That we have lost our way and sense of right and wrong, and succumbed to our inner demons.

This is not to say that the American people of earlier generations were free of transgression and wanton behavior, history reveals otherwise. And as far as America today, neither have we reached the depths of depravity, nor have we become a den of iniquity rife with immorality. But with the advancement of new technologies, especially TV, the major media, computers, the internet, and social exchanges, a new dynamic has been added and we seem to be on a wayward path, devolving. The late Senator Patrick Moynihan described it as “defining deviancy down”. To make matters worse, all our failings are now exacerbated and out in the open for the world to see. Some might say this is good, let’s air out all our dirty laundry and not keep it hidden and festering. But this can go only so far, there have been instances that have seen revelations of one sort or another, whether morally righteous or less than upstanding that have proved to be embarrassing and life changing, even deadly.

Voices from the past speak to us, teaching, at times warning, the people and their leaders of the consequences of moral turpitude. As far back as Aristotle, who wrote “when people acquire good habits of character, they are better able to regulate their emotions and reason”. The Founding Fathers expressed their thoughts toward virtue in the people and those in leadership, and spoke eloquently on this. The father of this nation and its first president George Washington on a number of occasions spoke of virtue in the body of the people; “If that virtue erodes by a corruption of morals, profligacy of manners, and listlessness for the preservation of the natural and unalienable rights of mankind, America would degenerate into tyranny”. Also, “There is no truth more thoroughly established than there exists, an indissoluble union between virtue and happiness”.

Benjamin Franklin wrote, “Only a virtuous people are capable of freedom. As nations become more corrupt and vicious, they have more need of masters”. And Thomas Jefferson, “No government can continue good but under the control of the people, and their minds informed by education of what is right and wrong; to be encouraged in habits of virtue and deterred from those of vice”; also, “Liberty is the great parent of science and virtue, and will be great in both and always in proportion as it is free”. Alexander Hamilton wrote, “The institution of delegated power implies that there is a portion of virtue and honor among mankind which may be a reasonable foundation of confidence”.

These attributions are only a select few of many on this subject; I could fill many more pages. The Founders were American patriots, learned men of honor and courage and willing to sacrifice their lives, fortunes and sacred honor to a cause greater then themselves. They believed in the American dream, and the need for a good, just and virtuous people to uphold and sustain the ideals they hoped would survive through future generations. The question is have we heard their accumulated wisdom and knowledge imparted to us down through the centuries, or have we closed our minds to these voices from the past.

Virtue is a particularly efficacious good and beneficial quality, and its place in a culture and how it is ascribed to each person has been much debated over time. But there is one overriding evolving concept, the essence of which is that it cannot be imposed, but is something that is realized and voluntarily lived up to by each individual. In other words, virtue and its nemesis vice, do not go about saying here we are, this is right, this is wrong. It demands careful and sustained reflection by every man and woman before it can become part of one’s life.

America is more than purple mountains majesty and amber waves of grain. Her greatness lies in the people, men and women of indomitable strength and spirit; they are the heart of a great nation. And for that nation to thrive, prosper, and maintain honor and dignity in the world, the goodness of her people is tantamount. Whether you’re a natural born citizen, visitor, or one, who out of desperation is seeking a better life, once you’ve walked within her borders, marveled at her awe inspiring monuments, great cities and treasured landscapes, and watched democracy at work, she is in your blood. Deny, insult, curse her, burn her symbols and denounce and embarrass her on the world stage, she will never abandon you. We owe America, each of us have a duty to live up to the highest of ideals and moral standards.

The words of Alexis de Tocqueville, French historian and political thinker, author of “Democracy in America”, said it best, “I sought for the greatness and genius of America in her commodious harbors and her ample rivers, and it was not there; in her fertile fields and boundless prairies; it was not there; in her rich mines and vast commerce, and it was not there. Not until I visited the churches of America and heard her pulpits aflame with virtue and righteousness did I understand the secret of her genius and power. America is great because she is good, and if she ever ceases to be good, America will cease to be great”.