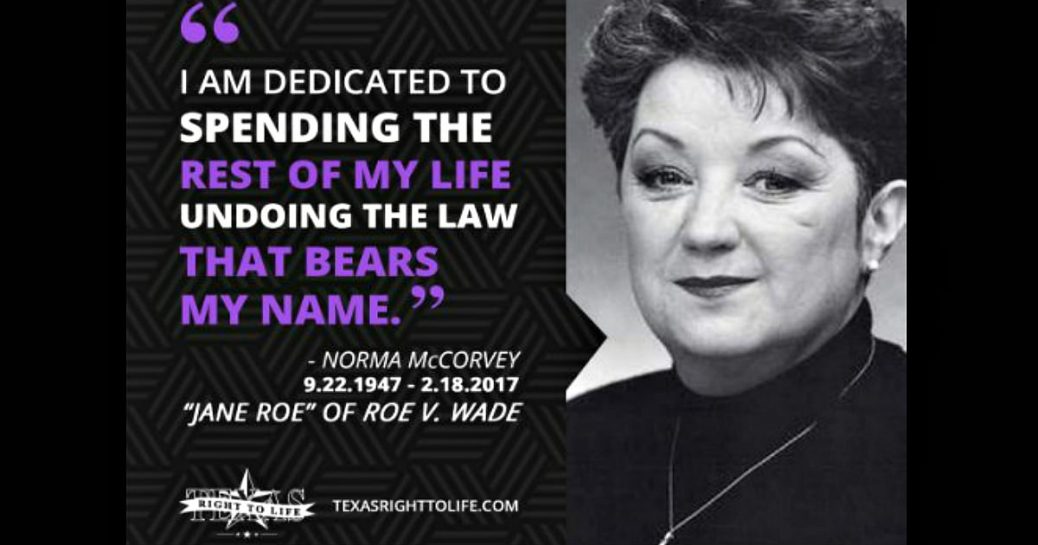 Norma McCorvey is most famous for being “Jane Roe” of the landmark Supreme Court case about abortion Roe V. Wade. However, over the last 20+ years she poured herself out in an effort to end the barbaric practice that she helped to legalize and normalize in America. Sadly, the pro-life warrior passed away on Saturday at the age of 69.

Kristan Hawkins, president of Students for Life of America, said:

Norma McCorvey will be greatly missed from this world but is no doubt rejoicing in heaven with the lives she has helped to spare over her lifetime. She was one of the first women that the abortion industry publicly betrayed, using her to fill the position of ‘Jane Roe’ in the infamous Supreme Court case of Roe v. Wade that made abortion legal throughout all nine months of pregnancy for any reason. She never even had the abortion but went on to place her child for adoption. Eventually Ms. McCorvey had a public conversion to Christianity and became one of the most widely-known and effective advocates for the preborn of her generation. We cannot thank her enough and pray that she rests in peace.

Father Frank Pavone, national director of Priests for Life, and a friend of McCorvey’s said:

“She was victimized and exploited by abortion ideologues when she was a young woman, but she came to be genuinely sorry that a decision named for her has led to the deaths of more than 58 million children.

Norma’s conversion to Christianity, then to Catholicism, was sincere and I was honored to be part of that journey. I’m sorry she won’t be here to celebrate with me when we finally abolish legal abortion in this country, but I know she will be watching.

Dear Norma McCorvey suffered at the hands of those who cared more about the institution of abortion than her. Then she triumphed.

Norma McCovery can RIP. She discovered the lie the early feminists understood. Abortion is not liberation.

Norma McCorvey understood what this from Susan B Anthony's newspaper meant: "thrice guilty is the one who drive her to the dreadful deed."

Norma McCorvey, the Jane Roe of Roe v Wade said about the SCOTUS decision: " I'm dedicating my life to overturning it." @mallorytq

They abused her body and soul. She hated what she did. She never forgave herself. We do. Rest well #NormaMcCorvey. We fight to #endabortion! pic.twitter.com/LZiF8FQMZP

Norma McCorvey, a.k.a "Roe" in the Roe v. Wade case, has died. She regretted her involvement and later became an anti abortion activist. MM

Abortion in America: The tragic and “complicated” life of Norma McCorvey, the “Roe” in Roe v. Wade, who died today. https://t.co/RUsnp4cxIu

“You read about me in history books, but now I am dedicated to spreading the truth…” Norma McCorvey 1947-2017 pic.twitter.com/kYZ54Nx2LB