No Statue for Private Jefferson Adkins 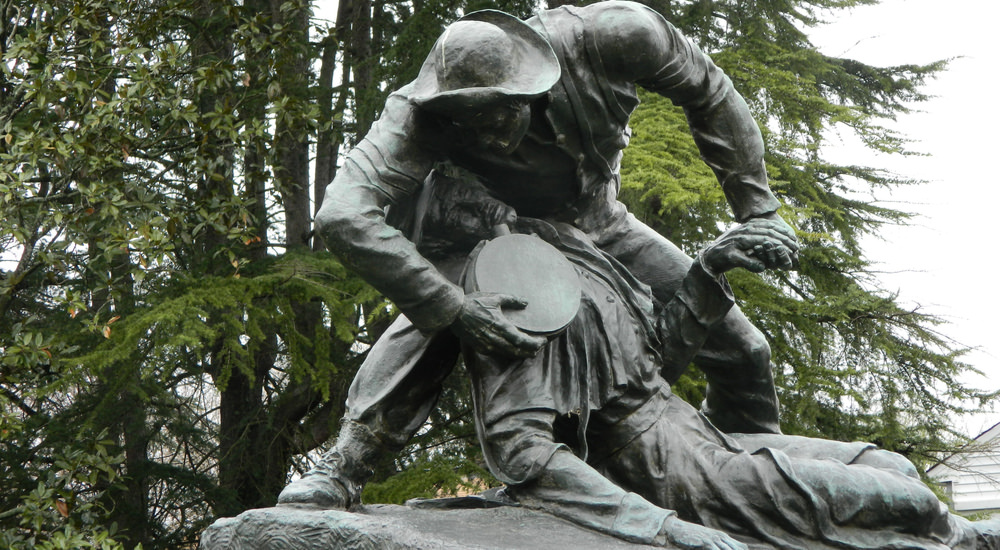 Monument to Richard Rowland Kirkland, "The Angel of Marye's Heights", a Confederate soldier brought water and blankets to wounded Union soldiers during the Battle of Fredericksburg.

He enlisted in the Army of the Confederacy in July 1862, at the age of 32. He was captured by Union forces outside Marietta, Georgia the day before Independence Day 1864. Four months later, in October of 1864, he died in Camp Douglas, a Union POW Camp in Chicago, Illinois. He left a wife and three children; among them, little five-year old Cynthia, who would grow up to become my great grandmother.

There was no way that Jefferson Adkins was a racist or even cared about the subject. He most certainly did not own slaves or condone slavery. He, like others of his generation, were mostly home schooled. And back then, all of the children worked the farm.

Jefferson’s wife, Emmaline, taught reading and writing and the Bible to her family and to black neighbor children. When he enlisted in the army, Jefferson was only doing what many of the other Ashe County able-bodied men did, he joined to defend his home and family from Union invaders. Although many Confederate soldiers knew that slavery was one of the main reasons for the war between the states, many more considered States’ Rights as the issue which moved them to first secede and to then take up arms.

Following the end of the Civil War, America slowly began to heal itself. And like all cultures, since time immemorial, both sides erected statues, plaques, and memorials to their troops, their military leaders and to those local boys and men who never came home. No one ever built a statue specifically commemorating my great great grandfather’s war service, and since I never knew him, I wasn’t too put out. I did, however, shed a tear or two for poor old Jefferson Adkins when I initially learned of his fate, many years ago.

Being a veteran, myself, I could easily relate to what he must have considered his patriotic duty to defend his land and love ones. Some years ago, on a trip through the South, whenever I would encounter a Civil War monument or other reminder, I was instantly taken back to Jefferson Adkins’ ordeal and his suffering. Never once did I spend a single mili-second thinking of slavery or racism while viewing and reading about the artifact. My thoughts were all about my great great grandfather’s service to his family and his fellow man.

I am sorry that there are some folks who feel that the statues of the Civil War era are painful reminders of their individual histories, but they are also painful yet proud memories for me, having an ancestor who gave the ultimate sacrifice in defense of his family and fellow men. The name of Jefferson Adkins will not be found in any history book. He was a Confederate enlistee who served (nearly anonymously) in a non-heroic role, for $11 per month and for that, he died a prisoner of war.

Most people are unaware that Confederate veterans were posthumously granted the status of United States veterans (same as all U.S vets) during the Eisenhower Administration, and desecrating a veteran’s memorial is a federal offense.