WikiLeaked! No Need For Wiretaps on Trump! Obama Already Had the NSA & CIA Spying on Americans!!! 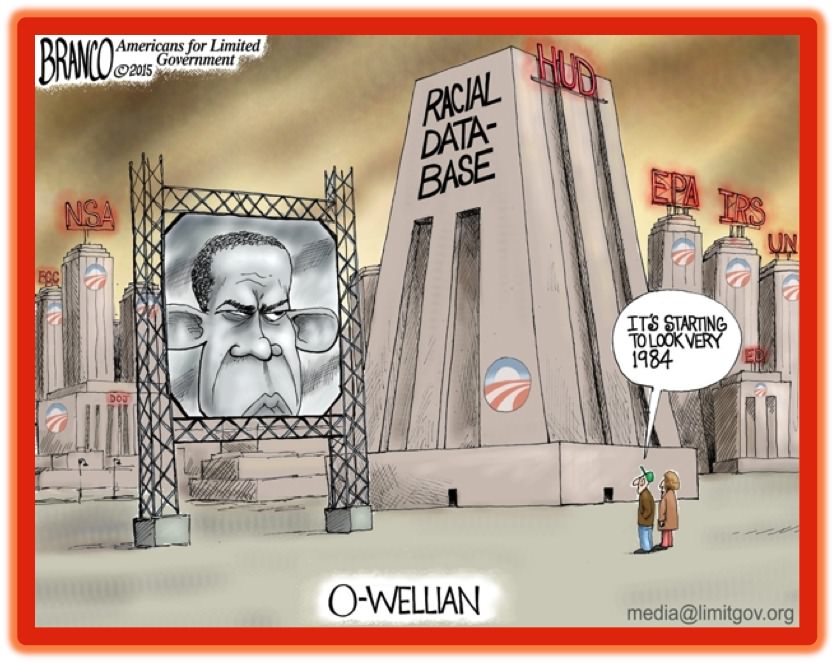 Obama’s wiretapping of Presidential Candidate Trump’s phone during the 2016 election is exactly like Orwell’s “1984.”  Obama’s denial that he “ever authorized surveillance of any US citizen,” or of Trump’s phone, means nothing.  Former DNI Clapper’s claim that they did not make a FISA court request, also means nothing.

There is nothing to authorize. As Edward Snowden* disclosed, the NSA is already collecting and snooping on all our phone calls and everything we do on the internet.  All that Obama had to do was to call for transcripts of what Trump and his campaign team had said!!

Obama and his Democrats operate as a Mafia. Using the NSA to spy on and discover everyone’s secrets; certainly facilitates and enables them to bribe, bully and blackmail every opponent and “win” at all costs.

The NSA built a $2 Billion facility in Utah to collect massive data about all our phone calls and internet use.* (Who authorized this massive expenditure?)  The NSA secretly and illegally bypassed the FISA Court, the  Foreign Intelligence Surveillance Court, which was supposed to oversee and authorize highly targeted domestic eavesdropping.   The NSA also installed secret electronic monitoring rooms inside major US telecom facilities that handle our phone calls. These monitoring facilities automatically send to the NSA facility, all of the over 320 million calls per day which we make.  This program allowed wholesale monitoring of millions of Americans’ phone calls and emails.
Edward Snowden exposed this program. In the wake of this exposure, Congress passed the FISA Amendments Act of 2008, which largely made the practices of the NSA legal. In addition, Obama granted immunity from prosecution and lawsuits to the Telecoms that had agreed to participate in the illegal activity of allowing our phone calls to be tapped.

In addition to the Telecom companies; our Tech giants, Google, Facebook etc also participate in this massive data gathering.  All of them would have to be paid massive amounts of our taxpayer money for allowing the government to traipse through their servers.  (Who authorized these massive expenditures?)  They wouldn’t want to lose this bounty.  This explains why they are all such avid Democrats and so willing to work against President Trump!!

The NSA has the capability to turn on your phone and computers, even when they are off.* It uses a plug-in GumFish, and records all your conversations. Another plug-in, CaptivatedAudience, hijacks the microphone on targeted computers to record conversations. Their   Flame spy tool uncovered by Kaspersky Lab in 2012, had the ability to surreptitiously turn on webcams and microphones and perform a host of other espionage operations.

WikiLeaks revealed today* that is has received 8,761 documents and files from an isolated, high-security network situated inside the CIA’s Center for Cyber Intelligence in Langley, Virginia. In what WikiLeaks calls “Year Zero” it introduces the scope and direction of the CIA’s global covert hacking program, its malware arsenal and dozens of “zero day” weaponized exploits against a wide range of U.S. and European company products, including Apple’s iPhone, Google’s Android and Microsoft’s Windows and even Samsung TVs, which are turned into covert microphones.

WikiLeaks also revealed in February that Obama had used the NSA to spy on a wide variety of Foreign Governments and Agencies.* Among others, the NSA has recorded conversations between Ban Ki Moon and Angela Merkel; Silvio Berlusconi and Benjamin Netanyahu, EU and Japanese Trade Ministers, the UNHCR chief of staff, 5 other EU officials, French candidates for President in 2012, and Nicolas Sarkozy, Angela Merkel and Silvio Berlusconi.

Obama also spied domestically, even on news reporters. Obama has sentenced Whistleblowers to 31 times the jail times of all prior US Presidents combined!* He used a WWI era Espionage Act to charge six government whistleblowers who had spoken to the reporters.* In order spy on them, Obama used warrantless wiretapping and dragnet records seizures to identify which reporter was talking to whom.

Spying on AP Reporters: Immediately after it was discovered that Obama lied about Benghazi; his DOJ collected two months’ worth of all the phone records, even private cell and phone records, of every single AP reporter and even editors, to discover who in the government was talking to the AP reporters.*

Spying on James Rosen: Obama’s Eric Holder labeled Fox News Reporter, James Rosen, a criminal and a co-conspirator to get a warrant issued. He then took Rosen’s phone records and emails and even monitored his parents’ phones, to find out whom Rosen was talking to in the government.

Spying on Sharyl Attkisson: Former CBS reporter Sharyl Attkisson who was investigating the Benghazi and Fast & Furious Obama scandals, found her computer suddenly turning on by itself! She hired a computer specialist to investigate. One intrusion against her was launched from the WiFi at a Ritz Carlton Hotel and she said the “intruders discovered my Skype account handle, stole the password, activated the audio, and made heavy use of it, presumably as a listening tool.”    Her expert also informed Attkisson that he’d found three classified documents deep inside her operating system, such that she’d never know they were even there. “Why? To frame me?” Attkisson asks in her book.  (Once you read these, isn’t it obvious why all reporters give glowing reviews to Obama? If they didn’t, they’d be targeted as criminals!!)

Spying on the Tea Party: After the Democrat’s shellacking by the Tea Party in 2010; Obama plotted to stop the Tea Party.*  Obama met with IRS officials and the head of the IRS Union* in the White House. Obama used the IRS to demand membership lists from Christian, Conservative and Tea Party groups in order to harass their members. And by getting Lois Lerner of the IRS to refuse to issue them charitable tax exemptions as 501 (c)(3) corporations; Obama prevented the Tea Party and other conservative groups from obtaining funds to operate and oppose him during his 2012 re-election. (So, why do you think Romney didn’t object? I think Romney was silenced because his tax returns were disclosed to the Democrats and also forwarded to Obama!! Remember Harry Reid making scurrilous claims in the Senate that Romney hadn’t paid any taxes for 10 years?)

But strangely, Obama has not been able to use the NSA to spy on Islamists. Obama has been unable to discover what ISIS was plotting in the Middle East; so we could defeat it. Or discover domestic Imams in Salafi Mosques preaching sedition against us, so we could charge them. Or discover when Islamic Terrorists were planning to harm us; so we could prevent Islamic Terrorist attacks like the Boston Bombers, the gay Pulse Nightclub shooter, the San Bernardino shooter, etc. Or even discover that the Fort Lauderdale airport shooter, whom Obama referred to as Esteban Santiago, a mentally sick vet; had converted to Islam even before he joined the army and that his real name was Aashiq Hammad and that he was also an Islamic Terrorist!*

Given all the slimy things that Obama has done*; isn’t it obvious that Obama was orchestrating attacks on Trump based on illegal intrusion into President Trump’s private conversations?

The swamp is far filthier and slimier than we ever dreamt. Pray God President Trump will have the courage to keep draining the swamp!

Did you forget Edward Snowden? XKeyscore: NSA tool collects ‘nearly everything a user does on the internet’ https://www.theguardian.com/world/2013/jul/31/nsa-top-secret-program-online-data

Government Spooks Can Use The Mic And Camera On Trump’s Phone Even When He Thinks It Is Turned Off http://freedomoutpost.com/government-spooks-can-use-the-mic-and-camera-on-trumps-phone-even-when-he-thinks-it-is-turned-off/

Obama Has Sentenced Whistleblowers to 31 Times the Jail Time of All Prior U.S. Presidents COMBINED http://www.washingtonsblog.com/2015/05/obama-has-sentenced-whistleblowers-to-31-times-the-jail-time-of-all-prior-u-s-presidents-combined.html