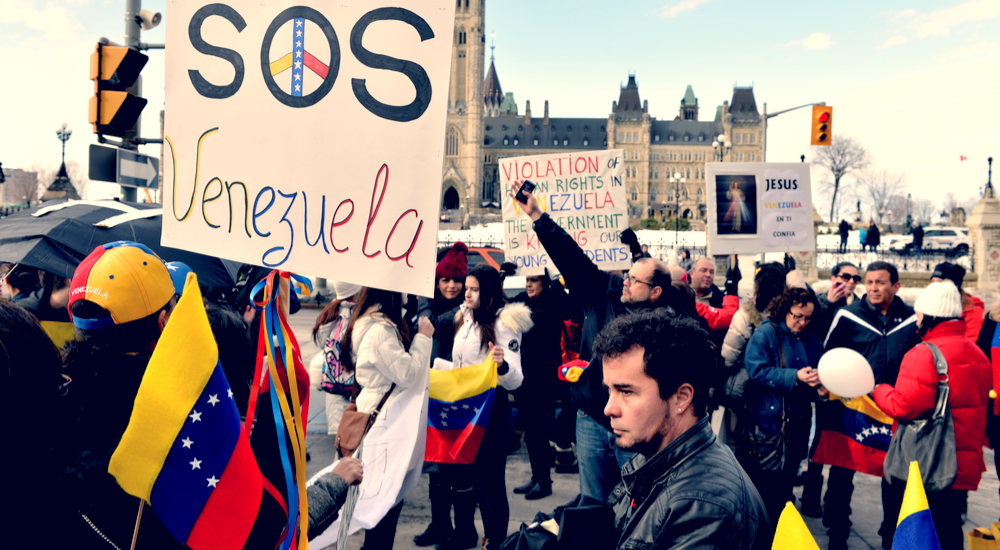 I don’t often disagree with President Trump or Vice President Pence on policy, but what we’re hearing regarding the whole Venezuela situation bothers me.

Everyone in their right minds would agree that Nicolás Maduro Moros, current president of Venezuela is a bad guy. And by a bad guy, I mean like the spawn of Satan bad guy. As bad as was Hugo Chávez, Maduro is worse.

Conditions in Venezuela are already terrible and getting worse all the time. Food is scarce and clean water, almost nonexistent. People are being forced to drink and cook what little food they have in the same foul water in which they wash their clothes (by hand) and children bath in. It’s a miracle that diseases haven’t yet run rampant.

Yet Maduro is unfazed, blaming the plight of “his” people on outside forces aligning against him and his regime. Sounds a lot like Kim Jong Un.

In January, the Trump administration withdrew “U.S. recognition of Maduro,” and instead, “threw its support behind self-declared interim president Juan Guaido, leader of the opposition and of the National Assembly.”

Joining in support of Guaido are the countries of Argentina, Brazil, Canada, Chile and Colombia. Our friends, the Mexican government, opted to continue their support of communist Maduro. Nice to know we can always count on our neighbors.

This is all well and good, but it’s where it should stop. The United States has no right to involve ourselves any further than a public pronouncement of support for Guaido.

But as we know, it hasn’t stopped there. On Wednesday, April 10th, “speaking at a Special Session of the United Nations Security Council on the Crisis in Venezuela, Vice President Mike Pence issued a scathing condemnation of the Maduro regime in Venezuela and one of the most stunningly blunt statements in the history of the U.N., looking directly at the ambassador from the Maduro regime and telling him, ‘With all due respect, Mr. Ambassador, you shouldn’t be here. You should return to Venezuela and tell Nicolás Maduro that his time is up.’”

Any time someone begins a statement with, “With all due respect,” you know they mean the exact opposite.

Many cheered Pence’s declaration. However, this is my disagreement with the Trump administration. Whether Maduro is a good or bad guy is completely irrelevant. Representatives of the United States have no business telling a ruler of another country “that his time is up,” unless we’ve declared war.

But this has been a problem for American leaders and American foreign policy for decades. We can’t seem to mind our business. Out of one side of their mouths they exclaim that we can’t be the world’s police force, and from the other, we end up declaring just that.

I feel for the people of Venezuela, but this is none of our concern, as the strife suffered by the people at the hands of Maduro is an internal matter, not international.

Enough with the regime changes Mr. President. Although this one looks like it may actually work, have we learned nothing from past administrations – to mind our business and just stop trying to spread democracy. Unless and until Maduro ventures beyond his own borders, we need to just knock off the rhetoric like not ruling out the use of our military, and “his time is up.”

Whenever possible, we should defer to the genius of our first and best president, George Washington, and abide by his foreign policy advice. The United States should remain neutral in foreign affairs as much as possible, and that America not involve itself in the internal affairs of other nations.

Good advice that sadly will not likely be followed.