Reports of climate change affecting our world are made every day. Sometimes, those doing the reporting use selective data and cherry-pick short term trends to drive home a doomsday narrative.

This is very much true with the claims surrounding extreme weather events. In the U.S., for example, long-term data on show a decline in the number of hurricanes making landfall. However, most mainstream media never report this fact.

Worldwide, numerous such exaggerations and misrepresentations are made regularly. This includes my country of India, where climate change is said to be causing both droughts and floods.

It is possible that you have seen the mainstream media project images of submerged cities in South Asia or detailed opinion columns highlighting how farms in India are dying from droughts. The blame for such disasters is placed squarely on a changing climate and emissions of carbon dioxide from burning fossil fuels.

However, 150 years of data – as far back as it goes — on summer monsoon rainfall reveals that both droughts and floods have long been regular occurrences on the Indian subcontinent, with no major departures in recent decades.

India, which has a population of 1.3 billion, holds a prominent place in the global politics of climate change. The country will soon become the most populous in the world, It is becoming a very large consumer of fossil fuels and is one of the largest agricultural producers.

Any adverse effect of climate change on the country’s weather would be felt directly by more than 17 percent of the world’s population. Many more millions who depend on India’s agricultural output would also be affected. Thankfully, rainfall data from the country’s renowned meteorological center shows no marked departure in precipitation trends.

The graph below shows the area-weighted mean summer monsoon rainfall, based on a homogeneous data set of 306 rain gauges in India from the Indian Institute of Tropical Meteorology. This is the most reliable index of summer monsoon activity over the Indian region since 1871. 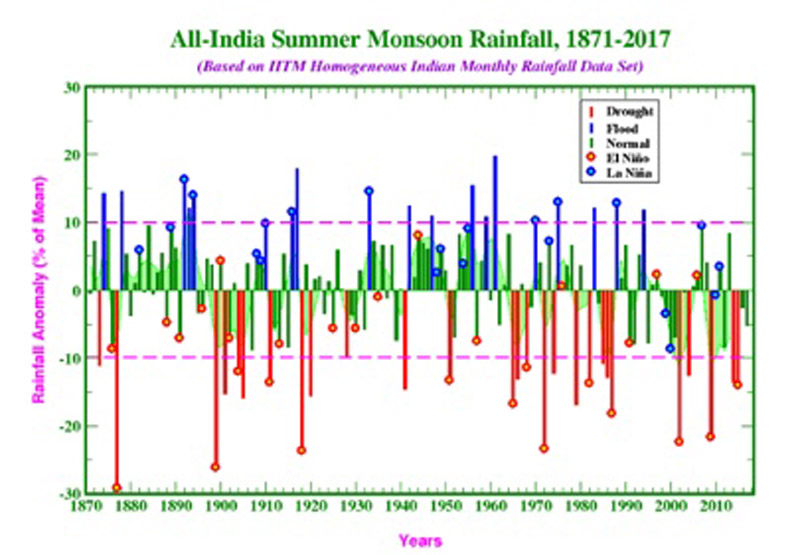 Experts note that it is quite difficult to associate the rainfall pattern with climate change or even with other well-known global weather phenomenon such as the ENSO oscillation patterns in the ocean. Monsoon rainfalls display epochal trends (short term trends) that are random, with some decades (1921-1964) being influenced by ocean oscillations while other decades (1965-1987) remaining largely unaffected.

Further, the Indian government’s comprehensive “Assessment of Climate Change over the Indian Region” points out that there is no increase in extreme cyclones due to man-made global warming/climate change.

In fact, there has been a decrease in cyclone frequency since 1950. The report says, “Long-term observations (1891–2018) indicate a significant reduction in annual frequency of tropical cyclones in the North Indian Ocean basin.”

In layman terms, there has been no dangerous increase or decrease in India’s summer monsoon rainfall or the cyclones in the region.

Yes, increasing agricultural activity in traditionally drought-prone arid zones and the lack of drainage infrastructure in metropolitan cities are real problems, but they have nothing to do with the climate. Extreme droughts, floods, and cyclones were regular occurrences in the past and the frequency pattern has displayed no dangerous departure in the recent decades.

Vijay Jayaraj is a Research Associate at the CO2 Coalition, Arlington, Virginia. He holds a master’s degree in environmental sciences from the University of East Anglia, UK and resides in India.