No Bail Out for Puerto Rico 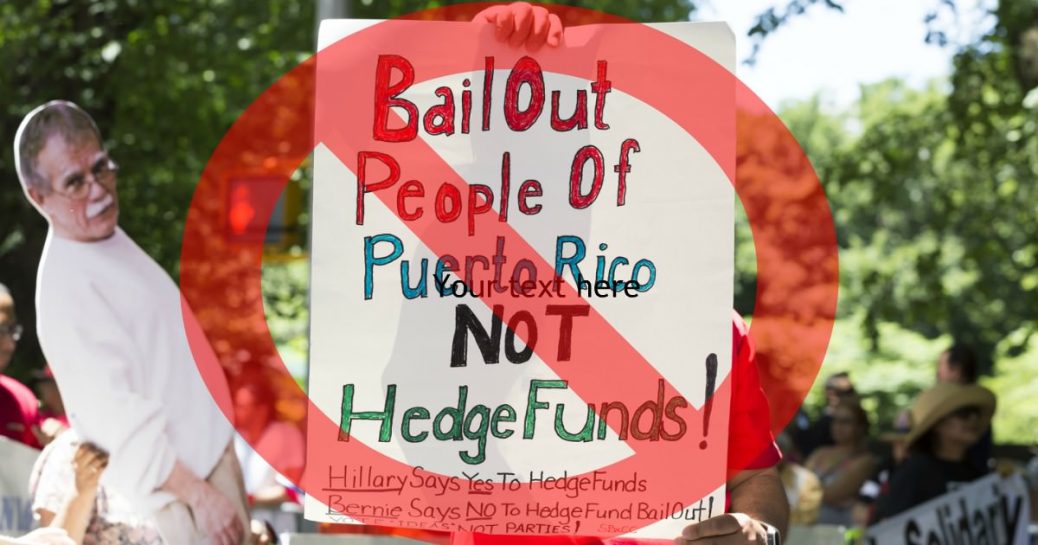 Puerto Rico asks for a bailout, as are California and other blue states, from their massive debts.

They all do this every time they suffer a disaster of some sort because they do not prepare for them, but squander their resources.  (This is especially amusing as Californians are constantly berating the South for tornadoes, floods, and hurricanes complaining of their high taxes going to help these people, which they don’t, while they bemoan their fires, landslides, and earthquakes for which their Democrat government is never prepared.)  It’s not that no one sympathizes with their plight, but the fact that their governments are so corrupt that they steal the money that should have been spent on infrastructure rather than upgrading against disaster.

Puerto Rico’s entire electrical grid went down for this reason.

Why should the rest of the nation have to pay for their mismanagement?

Why give these corrupt Democrats money with which to line their pockets rather than help their people?  It’s the same cycle of dependency by which the Left promotes sloth and greed among their welfare voter slaves.

Union Democrat truckers in Puerto Rico want to gouge the people for huge bonuses to deliver needed food that is sitting on shipyard docks rotting.  San Juan’s mayor wants to blame Trump for the people starving to death who haven’t had a grocery delivery for three days (as if it were possible to starve in three days).  While the governor and all other mayors are singing his praises, after doing so the first day she changed her tune once Pelosi and Schumer read her the riot act.  Now it’s smear Trump, slander Trump, and vilify Trump at every turn.  Democrats believe this will be their winning formula for winning back power in 2018 and 2020 – a nasty propaganda campaign to defame and disparage Trump as being insufficient as a leader in the eyes of the public.  Shades of Ethiopia!  Like all Democrat run states this one is rife with corruption and graft.  Where Africa at least had the excuse that Moslem warlords were deliberately refusing to transport food to people to kill off non-Moslems, this is a territory of the United States in which Democrats are doing the exact same thing out of pure greed!  Where Moslems said the food sent by “Christian Crusaders to aid their enemies” would not be permitted to reach the people they were deliberately starving, it seems that the mayor of San Juan who wants the DNC to support her bid for the governorship is willing to do the same and make Trump her scapegoat.  The president should use ONLY federal contractors sent into the country to help the people, to conduct necessary repairs, and to provide services.  Giving money to the Democrats in control of Puerto Rico is like giving money to Louisiana Democrats to shore up New Orleans’ levies.  It will find its way into their pockets and the Democrat Party coffers with just their version of trickle-down going toward infrastructure.

Liberals create fictions they believe are facts.  Take global warming.  They believe Democrat scientists represent all the world’s scientists and that their science is legitimate as a consensus of scientists.  The same was true of scientists in the age of Galileo that the Earth was the center of the universe because the Catholic Church said so.  The church of liberalism says that man is the cause of climate change regardless of the scientific evidence that the Sun is, and that volcanoes do not spew more pollutants into the atmosphere than all of man’s industries combined.  Instead they believe CO2 from cars is the cause despite there being no evidence to support their theory that mankind’s pollution is making the planet hotter.  There is no empirical evidence, nor any experiment they can perform besides computer models designed to yield the desired result, to support their hypothesis.  But like evolution, they believe their theories are proven based on erroneous facts they parse together.

Likewise liberals believe the Texas economy is trash and California is booming thanks to leftist misinformation websites.  They even have charts that show Texas has more debt than California.  But no one in Texas is asking for a bailout while California cities and the state have been begging for the federal government to give them taxpayer dollars because Democrats have spent them into the toilet.  Like Detroit that hasn’t had a Republican in charge in decades, that used to be the richest city in the country, is now a Democrat slum, the Left blames the people’s poverty due to their own theft of the people’s wealth on Republicans.

Now the Left believes they have the winning formula to defeat Donald Trump who has already re-energized the economy to greater economic growth in just one quarter than all eight years under Obama.  Despite Democrats and Republicans obstructing real tax reform, America knows it has a leader who isn’t going to steal their wealth to feed his cronies.  President Trump is giving Americans back their country so they can get jobs and live the American Dream once again, while Democrats insist that importing cheap labor to work for them is the most beneficial, humanitarian of endeavors.  Liberals believe they can win the next election by casting Trump as a demon who is too evil and too stupid to do good.  They believe this will win them back the House, the Senate, and the Presidency.  It is akin to Hillary’s entire campaign of “Trump is a greedy, misogynist pig while she is a benevolent woman.”  It is a vacuous, nonsensical, erroneous belief in an ideology built on a house of cards of lie upon lie.  Once the first lie is exposed the rest begin to come tumbling down.  The Big Lie has been the basis of Democrat politics for the last century that they are for the little guy while Republicans are only for corporate fat cats.  With the advent of the Internet and exposure of the truth the percentage of people who believe this has fallen from 50% to 20%.  The only reason Democrats can keep parity in elections is because of their welfare voter slaves and imported illegal voters taking the place of those citizens who are still ambivalent.  States that have become bastions of Democrat corruption like Minnesota, California, New York, Illinois, the Left Coast, and the northeast, have driven out Republicans citizens who have fled their confiscatory taxation to places conducive to good living.

Because they have been driving out businesses and people with their high taxes, Democrats want a federal government with themselves in charge so they can take monies from productive Republicans states like Texas and bail out California, etc.  They are the epitome of the takers stealing from the makers.  San Juan’s mayor wants to be governor to strive for that base Democrats ideal and no amount of mud-slinging is too filthy for her to dip her hands into if it means Pelosi and Schumer will assist her in obtaining power.  Donald Trump used to like Schumer as his state’s senator and donated to his campaigns.  Now that Schumer has dedicated his position to slandering Trump at every word unless he does what Democrats want makes people wonder what Trump thinks of Schumer now.  When Republicans obstructed Trump and he turned to Schumer to make a short term deal to shake them up, Schumer thought he could score by claiming Trump had turned against the people who elected him.  Like all leftist lies this one quickly fell on its face when Trump denied any such thing and left Schumer with egg on his face.  The Left deals only in deception and their lies do not have the life they used to thanks to the Internet destroying the left’s monopoly on the facts people are told.