No. 22 Million Will not LOSE Their Healthcare 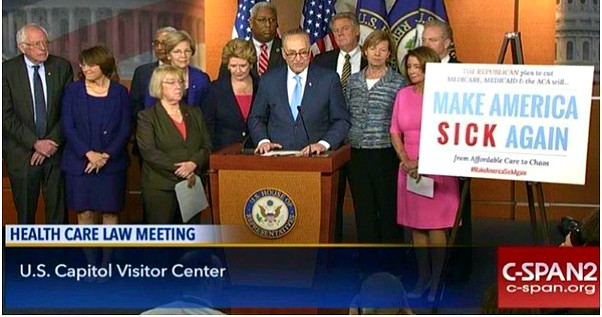 As most already know, from day one, I’ve been an ardent opponent of ObamaCare. I’ve said many times that it was created expressly to fail. And it was designed to do so, both spectacularly and as a means to ruin private health insurance, by not only

breaking them financially, but also to erode the public’s confidence in the private insurance market.

And it’s been working like a Swiss watch. Private insurance companies have been pulling out of State after State due the stress Obamacare mandates have put on their balance sheets. Peoples confidence in the current private/public healthcare partnership (what a joke) has waned to the point that a growing number of Americans are beginning to demand a single payer system. The speed of transformation from any semblance of a free market insurance system to a purely socialist system is remarkable and almost surreal.

But we thought – the Republicans to the rescue. Think again. As we’ve witnessed, the Republican plan is far afield from we were promised. We already know this.

We know that neither the House nor Senate plan is a repeal bill, or frankly even a replacement bill. Yet as similar to ObamaCare as both plans are, you would think, by the coverage they’re receiving, the Republicans wish to privatize everything and end all entitlements. Great idea, but it’s not what they are proposing.

One thing the left is saying is particularly infuriating to see and hear. Infuriating in that once again the left has set the agenda and talking points. The right then accepts their offensive and merely reacts to it. It appears, at least to me, that the right has no desire to educate the masses or even set the record straight.

I and others have often said that people hear what they want to hear, and believe because they want to believe. The above title is a perfect example. Although the title is accurate, or as accurate as a long-term estimate can be (which is usually not very), most will read the words and conclude that the Republican plan will force 22 million people to LOSE their healthcare. But that’s not what it says.

Vox, I believe, chose these words very carefully, in order to be both accurate, but still allow the readers’ mind to wander into another conclusion.

The article states that “As soon as next year, 15 million more Americans would be uninsured, the office [CBO] found in its analysis of the latest Senate GOP plan.” And also, “the Senate bill would cut the program’s spending by $772 billion over 10 years, versus what would be expected under current law.”

Here’s the way the ill-informed, which are most of Vox’s audience, will interpret those two statements. 15 million Americans will be forced out of the healthcare system next year, and the Republicans plan to cut $772 billion dollars from the program. Both of these are false, but are written in such a way to cause the reader to think they are true.

If they were reporting this honestly, Vox would have written that the figure is an estimated $77.2 billion per year less than the expected yearly massive increase in spending. Only in Washington is less of an increase a spending cut.

Now, to the dreaded 22 million forcibly uninsured. The Republican plan is to get rid of the rather hefty yearly penalty you currently are forced to pay if you choose not to have insurance – or have the IRS come-a-callin’. So rather than pay the fine and get nothing, people have been buying mandatory ObamaCare insurance (and getting nothing).

This is the big lie, and it’s why Vox had to write it this way.

Once again the left has hijacked the narrative and the right is just sitting around letting it happen, because they’re either too stupid or too cowardly to speak up. Of course there is a third reason. The Republicans really don’t want to do anything.