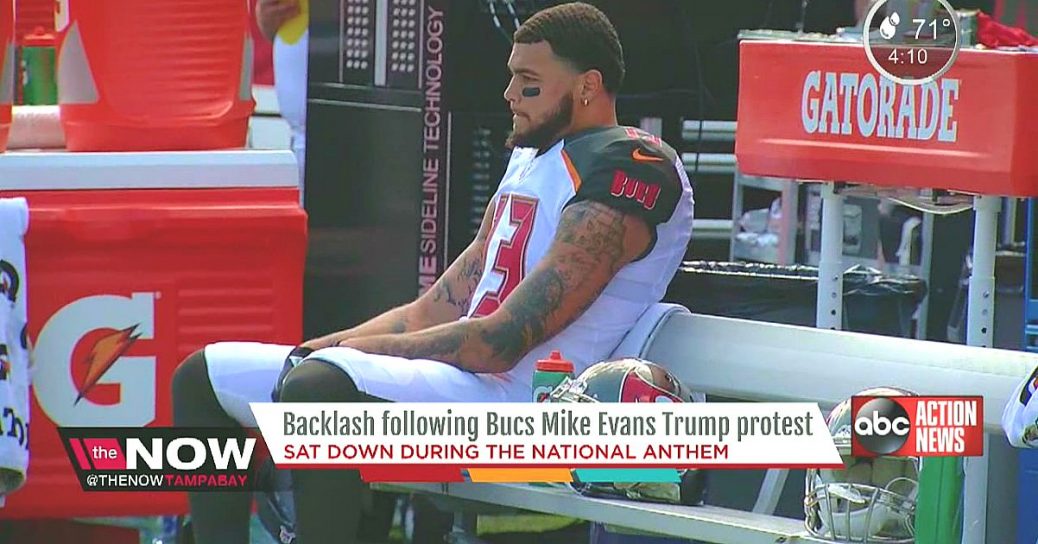 I have been a Tampa Bay Buccaneers season ticket holder since 2005, the first year I could afford season tickets after starting my career.

I have been a die-hard Bucs fan since I moved to Tampa Bay in 1980 as a five year-old kid from New York.

Even now, I sit in an office that is painted pewter and red and adorned with all kinds of Bucs memorabilia. When something newsworthy happens with the Bucs, my phone usually rings from friends or family asking what I think about this or that. “Did you see so-and-so got cut?” “Did you see so-and-so got arrested?” “Who are the Bucs going to draft?” My reputation as a fan of the team gave me some kind of unofficial and undeserved credibility as some kind of expert in all things Buccaneers.

Which brings us to Sunday and the fervor surrounding Kneel-gate. Naturally, I was inundated with questions about my own team allegiance. Would I give up my season tickets? Would I repaint the office?

A little backstory: last year, Buccaneers wide receiver Mike Evans sat for the National Anthem for one game. I owned a Mike Evans jersey. When we got home from the game, I threw it on the barbecue and broadcast it on Facebook live. I was never going to wear that jersey again. My father is a veteran. My stepfather is a Vietnam War veteran.  I couldn’t wear that jersey in front of them without feeling a sense of shame. So I cooked it up nice and crispy.

But after Sunday, I wasn’t quite as impulsive. ESPN’s Darren Rovell estimated on Twitter that “approximately 12%” of NFL players sat for the National Anthem on Sunday. That’s about 180 players total. Some players knelt, some players locked arms, some teams stayed in the locker room (Pittsburgh). Again, Mike Evans took a knee (even after promising last year that he was done with the protests) with new Bucs wide receiver Desean Jackson.

In the aftermath of the Sunday games, I read all of the news sources chronicling what happened. People analyzed and scrutinized the gesture and what it meant, but a pattern started to develop: there wasn’t any clear message that was being sent. The pattern was there was NO pattern. There wasn’t a unified message.

Then it hit me. This is all nonsense.

All I kept seeing was this giant word salad of key terms being spouted by sweaty, barely educated man-babies in shoulder pads. Words like “oppression,” phrases like “systematic racism,” and catch-all terms like “equality” were being tossed around by these players. They were saying so much, but saying nothing at all.

It reminded me of another “movement” that seemingly had no purpose. The Women’s March.

Like Kneel-Fest 2017, I have no idea what all those women in pink vagina hats were marching for, but again, I heard terms like “equality” (which they have), to fight “oppression” (pretty vague), and “women’s rights,” (huh?).

The Huffington Post ran a photo essay of “89 Badass Signs From the Women’s March.” Here’s a collection of some of the signs that they featured:

And on and on it goes, but the point is, there’s no coherent point or message here. It’s just a crowd of women dressed as genitalia spouting off about random topics. Ask yourself, in the wake of the piles of garbage left behind by the Women’s March, what changed? What was the end result of that mass of screeching humanity? The answer is nothing. Which brings us back to the NFL and the genesis of where this whole kneeling-for-the-Anthem blather started.

Go all the way back to the first time Kaepernick sat for the National Anthem. After the game, he told the press the following:

“I am not going to stand up to show pride in a flag for a country that oppresses black people and people of color. To me, this is bigger than football and it would be selfish on my part to look the other way. There are bodies in the street and people getting paid leave and getting away with murder.”

While the comment is vague and non-specific, Kaepernick is referring to cases like Freddie Gray, Michael Brown, etc. where black people ended up dying after altercations with police (we won’t debate the circumstances of those deaths here, but we will acknowledge Kaepernick’s protests are related to those situations). And this next comment may shock you, I’m actually okay with that. If someone sees an epidemic of black people dying at the hands of police officers for whatever the reason and they feel the need to stand up and do something about it, I’m okay with that. In the end it means less work for our cops and less crime on the streets.

But here’s the thing: don’t take your anger out on the flag and the National Anthem. First, the police are local and municipal, not federal. Second, you’ve now made attacking the flag a sign of your protest and I want nothing to do with that, regardless of how noble your cause is.

It turns out, Kaepernick has never even voted in his life. The Sacramento Bee reported that Kaepernick turned 18 while living in California but never registered to vote.

“You know, I think it would be hypocritical of me to vote,” Kaepernick said. “I said from the beginning I was against oppression, I was against the system of oppression. I’m not going to show support for that system. And to me, the oppressor isn’t going to allow you to vote your way out of your oppression.”

Actually, Kap. That’s exactly what voting does. Voting isn’t showing support for the system. It’s just a tool, the people are the machine. You find a like-minded candidate and you vote for them. Or better yet, run for office yourself. You’ve got money. You’ve been donating to social justice causes. Get a campaign together and facilitate change on your own.

I mean (snicker), it’s not like you’re playing pro football or anything….  (too soon?)

Regardless, Kaepernick is out of football and isn’t taking a knee anywhere this season.

But as Week 3 in the NFL opened this past week, we started to see the Kneelers crawl out of the baseboards, coming to a huge crescendo on Sunday, even garnering criticism from President Donald Trump who said that he would love to see the kneeling S.O.B.s “fired.”

This prompted a statement from the NFL condemning Trump’s comments. “Divisive comments like these demonstrate an unfortunate lack of respect for the NFL, our great game and all of our players, and a failure to understand the overwhelming force for good our clubs and players represent in our communities.”

But with all of these teams linking arms, players kneeling, etc., it is starting to look like this is more of an anti-Trump movement or a “free speech” movement which is silly because no one is being arrested for these protests.

“He’s supposed to be running our country, not tweeting, texting and speaking on NFL guys and what their rights are. It’s crazy to me. He’s a joke. He’s a clown and I speak how I see it,” said Buccaneers receiver Desean Jackson, who knelt on Sunday.

“It was very childish on his part. It seems like he’s trying to divide us. I think this is an opportunity for me to do what I can. A lot of guys around the league did it and I understand why,” said Jackson’s teammate Evans who also knelt.

Wait a second, I thought this was about police brutality, or oppression, or something….? Now it’s an anti-Trump rally? This is beginning to sound suspiciously like….

That’s when I realized that all this kneeling and staying in the locker room is all just idiocy. None of these weak-willed cretins who are kneeling know what the hell they’re doing and the one guy who had half a clue is out of football. I’m not angry at the players. In an odd sort of way, I pity them. They’re getting used by progressive left-wing activists to push a cause; essentially sour grapes for an election that didn’t quite go the way it was supposed to.

So, no. I’m not burning my jersey this time. I’m not canceling my season tickets. Why? Because this is just noise. Noise created for the sake of noise. It’s a tantrum. It’s the kid in the Target aisle being dragged by his arm toward the door as he wails for the toy from the latest Marvel movie. Eventually, it will be over, the tears will dry, and like the Women’s March, no one will care anymore and we will eventually forget what the heck anyone was ever complaining about in the first place.  I’ll just shake my side to side and say “Bless your heart, you dopey little morons.”