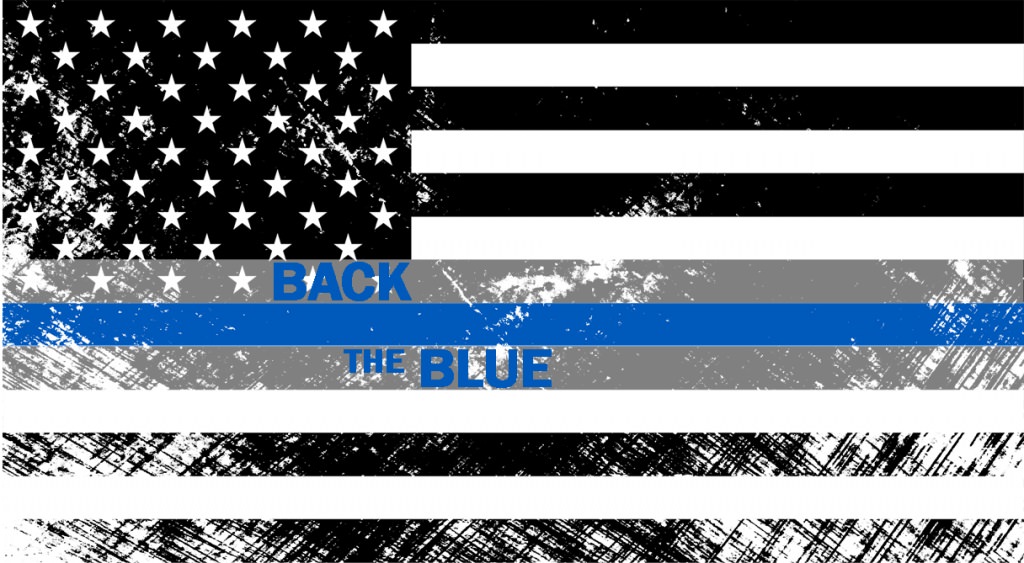 Start shouting “BACK the Blue!” from the stands.  The NFL is trying to change their tone to conceal their message so it will resonate.  But by standing to link arms in unity with those who declare they are protesting police brutality, that cops are as racist as the KKK, they are expressing their hatred for the brave men and women in blue who protect our children.  This is no more respectful of America than kneeling for the anthem.

Who do they think they’re fooling?  They are certainly fooling liberals.  Players and some fans at Thursday night’s football game linked arms during the National Anthem in protest against – the men and women of America’s law enforcement.  They say they are against police brutality.  They say the police are racists. They say cops are murdering young black men..  They have rioted and assassinated police in the name of fighting racism.  Meanwhile, violent crimes and murders by blacks have skyrocketed in Democrat controlled cities.

They say they’re not against police and concede there may be some good police.  There may be some good blacks in inner cities that go to school and become educated to get jobs rather than join gangs to become criminals, drug dealers, and pimps selling their bitches and hoes making bastard babies.  But men like Dr. Ben Carson are the exception.  Young black men between 20-40 years old are twenty times more likely to be violent criminals than any other demographic group, including any other group living in poverty.  It is not poverty that creates criminals, but the choices they make.  The truth is almost all cops are good people who want to serve and protect the good people of the inner cities.  But now the NFL is linking arms in unity with the criminals who despise the police.

This all began over Michael Brown in Ferguson who was an unarmed black teenager who was shot dead by a policeman.

The Democrat tale is that he was running away from a cop who was unjustly accosting him, fell to his knees with his hands up shouting, “Don’t shoot,” when the officer walked up behind him and shot him in the back.  But the autopsy and other witnesses confirmed the officer’s version that Brown, a four hundred pound hulking brute who used his size to steal from and intimidate store owners, had attacked the officer in his car trying to take his gun, and when the gun went off he ran.  But then he turned back and charged the officer to take him out and was shot multiple times from the front.

Democrats have rioted in the streets over this looting and burning on the basis of a lie and Democrat politicians have encouraged them.  This is the proof that Democrats are the party of criminals and endorse their lies and the poor people in their cities are suffering for it.

Justice for Michael Brown – the facts in black and white

The savages are loose in Ferguson

“Hands up don’t shoot” is as fictional as man-made global warming and Islam as a religion of peace.  But brainless liberals believe whatever they are told without making the least effort to investigate to learn the facts and see the truth.  Linking arms in unity with the players, who are doing so to spit on the brave men and women in blue who protect innocent Americans from thugs and gangsters like Michael Brown, is as heinous and disgusting as endorsing criminals.  The Left sees police as oppressors because they uphold the law and stop these criminals from stealing and assaulting the good people of America.  Of course they hate police – all criminals do!  Asking Americans to unify with them to disrespect the Blue is no different than kneeling in disrespect of the National Anthem and the flag for which millions of Americans have sacrificed so that this nation would be free.

The NFL is just digging themselves a deeper hole in which to wallow in the sh*t coming out of their mouths.

On FOX this morning, Bernie Goldberg said that this protest is now against President Trump who did wrong in openly condemning these players.  Goldberg is wrong in condemning Trump for being the voice of America speaking out against the unrighteousness of these protests and their condemnations of police!  This is not about social justice, which are liberal lies manufactured to damn the founding principles of America.  This is about hating America, hating patriots, hating police, hating white people, and hating righteousness.  God bless President Trump for having the courage and morals to do exactly the opposite of what Barack Obama did when he condemned police for doing their job rightfully without knowing the facts.  The facts here are clear.

If they go to the game, fans should pound these cretins by stomping their feet and start shouting from the stands again and again;

It’s not about the flag – liberals believe Americans are stoopid

Putting the ‘I’ in Team – the mental disorder of liberalism

When you take a knee…