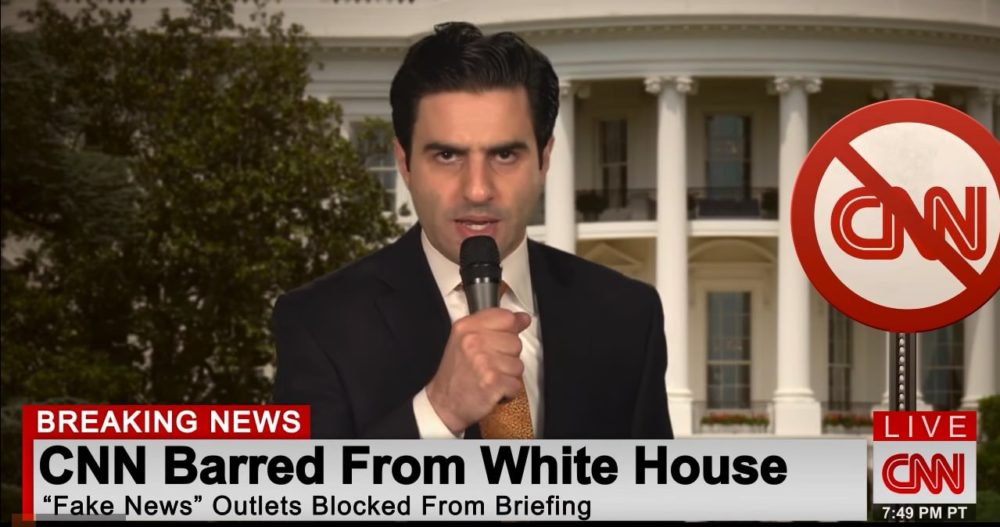 While the mainstream media continues to hammer our favorite news sources for being filled with “fake news,” it’s nice to see someone doing something about it.

The libertarians at Reason.com have created a new satire video that unmasks the mainstream media as a major purveyor of fake news. Using real (and fake) stories that have run their course through outlets like CNN, NBC, ABC, etc… the musical geniuses from Reason show incontrovertibly that the liberal media is filled with its own steady stream of fallacies.

Nothing else to report, Ed
as we’ve been banned from the press gaggle
and labeled as “fake news” by the president.

We’ll have to prove him wrong. Thanks Tim.

Trump’s approval numbers have gone to new lows
according to a new poll–and we’re never wrong about those
And is Starbucks’ new cup bringing people to tears
No, but we’ll find two tweets like we do every year

Uh, Ed? Yes Tim? Look, this is obviously bad
But do you think we could maybe help our case a tad
They say we’re not news, that we just make stuff up
My apologies, Tim, I’ll fix that right up

A nurse shark bit a man in a Florida park
Could this summer be the SUMMER OF SHARKS
Plus, a product you own causes death exponentially
The answer to that misleading question eventually

Ed, you’re hiding the cause of acute meningitis
Do you see why perhaps there are folks who don’t like us
I really believe that they’re flatly just wrong
But could you just help me a little? Can do Cap-i-tan.

A Hero Is Born! Meet the daring A.G.
who won’t enforce the laws with which she disagrees
Plus, Kim Davis, the mouth-breathing slob
Should we jail public servants who won’t do their jobs?

Okay, see, that’s what I mean. That’s what they accuse
That we color the coverage to match with our views
Should we not be objective and foster a trust?
I suppose you’re right, Tim. I’ll do what I must

A World on the Brink! Perils unfurled
as Trump speaks with the most dangerous man in the world
Plus, Mitt Romney’s gaffes just don’t seem to slow
His moronic claim Russia is our biggest foe

Finally, it’s given all journalists stupors
But proof has been found by Pricewaterhouse Coopers
The President making with great genuflection
concessions to Russia if he wins the election

A White House in chaos? We give you a peak
at the transcripts we got from a delightful new leak
Plus, Edward Snowden, the traitor abroad
Should leakers be hung like the cowards they are?