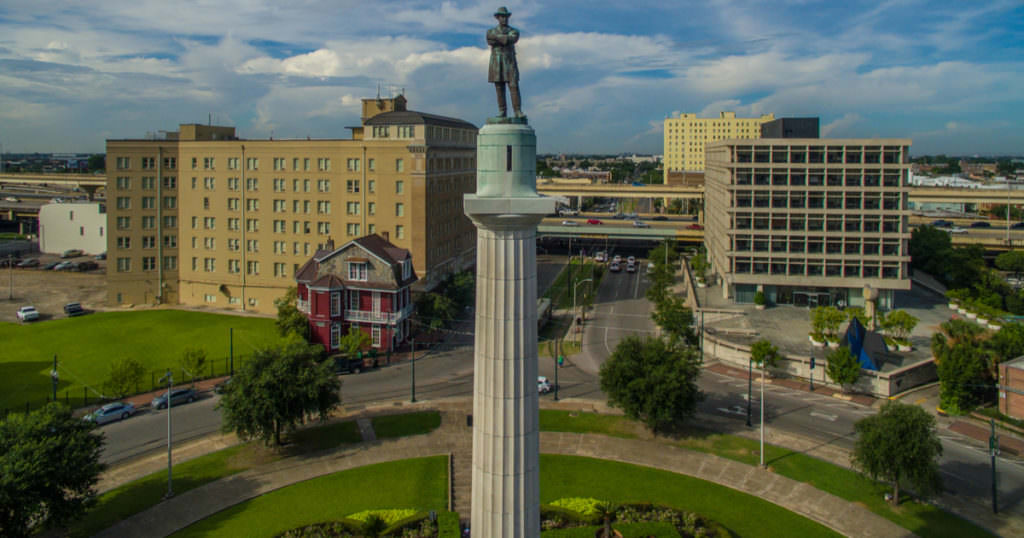 With a long heritage of Spanish, French and other influences New Orleans has a unique place in the history of the nation. With streets named Tchoupitoulas, Melpomene and Terpsichore, foods like the Po-Boy, muffulettas and café – ole and beignet’s, who would doubt that you are in an unusual city when you set foot in the famed – “Crescent City”

On May 19, 2017 Mayor Mitchell J. Landrieu was giving speeches which declared that statues of Gen. Beauregard and Gen Robert E. Lee were nothing but a “nuisance” and by removing them New Orleans would then come into the great twenty first century cities which are now more diverse and friendly to all. As he spoke, in another part of the city a crowd of 400 people stood by and watched the 8,000 pound statue of Lee, which stood in in the city’s “Lee Circle” for 133 years, being hoisted up hauled away like so much junkyard refuse.

The Mayor has his eye on the statue of Andrew Jackson featured prominently in the center of world famous “Jackson Square for his next conquest. Perhaps it’s his idea of a “lagniappe.”

Lookout tourism – you are about to take a big hit.

With many throughout the country scratching their heads and asking why; the long and the short of it are easy to explain – maybe.

Ripping the statues out of their places is the deed that is supposed to remove all remaining vestiges of “white supremacy” in New Orleans.

The remaining question is – what to do with the history books? If the mayor follows his path to a natural conclusion it would seem that a big book burning is next.

In California Gov. Jerry Brown has led the armies of the left against the hordes of imaginary trans, gay and homophobes, and now even kindergarteners can get some LGBT indoctrination before they get to hard to manage as non-diversity creatures. This has earned him the nickname of “Governor Moonbeam.” It is hard to imagine what Mayor Landrieu may earn for his nickname, but it is not so hard to see that once again the leaders of the left have managed once again to show up at the wrong war.

Landrieu said that removing the statues would be tough and then added, “but you elected me to do the right thing, not the easy thing,” This is one mixed up politician. Removing statues is easy; all it requires is a crane and a truck. Removing the stigma of being one of the worst cities in the nation for violent crime is what is tough. Landrieu hasn’t made a dent in that ugly distinction since the day he took office.

New Orleans is a city that ranks number 4 in the nation for assaults and murders. Children are taking stray bullets and black on black crime is the number one cause of death in this dark setting of inner city criminal activity. Mayor Landrieu may be fully aware of these statistics, but to date has done nothing that result in lowering the rising toll of untimely and gruesome deaths in the city.

Now, areas such as the historic French Quarter and the uptown sections of the city where Tulane and Loyola Universities are located are under attack from robbers, carjackers and murderers. Those who live in the Greater New Orleans area hear of shootings on almost a daily basis.

Has the Mayor failed to identify the real “nuisance” that is plaguing the city? Many are saying – yes including, Jeff Crouere the host of the New Orleans radio and TV show known as “Ringside Politics.”

In a scathing piece entitled, “Left Wing New Orleans Mayor Declares War on History,” Crouere declares, “It is quite ironic that the liberal Democrat Mayor of New Orleans, Mitch Landrieu, is trying to erase uncomfortable parts of the city’s rich history while simultaneously preparing to celebrate the tri-centennial next year. A world-renowned city known for priceless architecture and monuments is becoming less interesting, all because of Landrieu’s insatiable political aspirations.”

With no hope for a third term as mayor, Landrieu may have his eye on the Governor’s mansion in Louisiana, but he will never be able to explain the contradictions he has left behind in his legacy as mayor.

Crouere says, “When the history books are written on the Landrieu administration, the verdict will certainly be negative. As Mayor, Landrieu presided over a city ranked as the Murder Capital of the nation. He decimated the police department and the officer ranks declined by 500 or more during his tenure.

The rate of violence has significantly increased near the end of his term with a dysfunctional criminal justice system and a District Attorney’s office that the Mayor refuses to fully fund. While he can find resources to take down Confederate monuments, he will not fund an office dedicated to keeping criminals off the streets of New Orleans. It is quite a pathetic insight into his mayoral priorities.”

It is well known that most residents of New Orleans agree that the city’s part in the great scourge of slavery is a part of its dark and deplorable past. But it is past. Bringing it to the front again is re-creating the pain and loss. Is this the job, the calling and the reason we elect mayors?

All that seems left is to follow this mayor to the big book burning of 2017.

Whatever happened to “Those who forget the past are doomed to repeat it?”

The entire forget and remember thing can now be circumvented by hiding a few bronze statues courtesy of another liberal flight of fancy.

Will somebody tell Mr. Landrieu that the statues are dead before he brings all the antagonism of the past to life once again in the grand old city so often referred to as – “The City that Care Forgot?”

It is the “state of the city’, not the “look” of the city that needs a good mayor’s attention. Landrieu is obviously too engrossed in his liberal subjectivism to garner this simple, but profound truth.

“Judge not according to the appearance, but judge righteous judgment.” (John 7: 24)